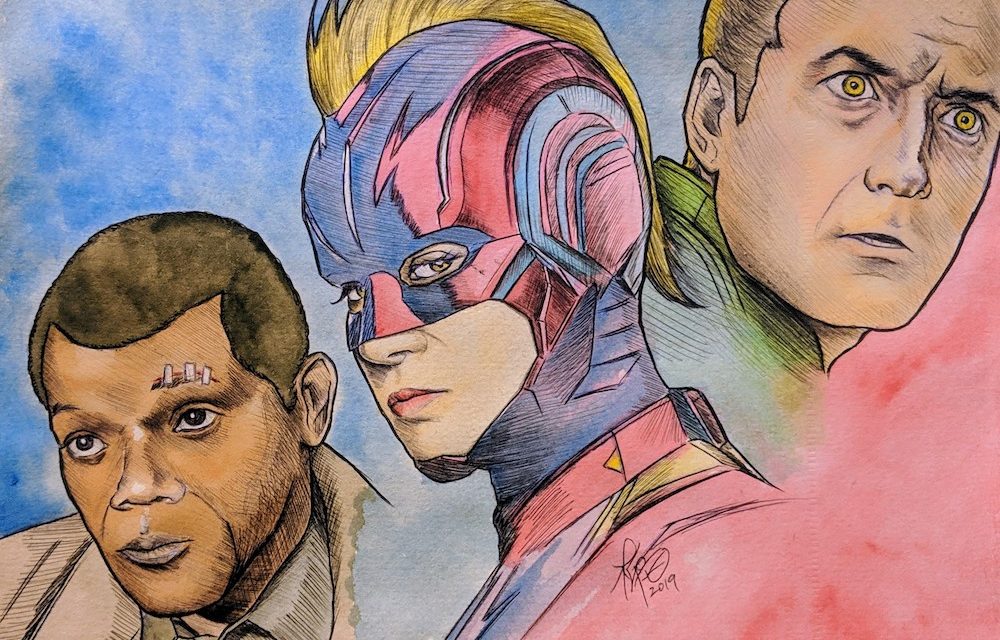 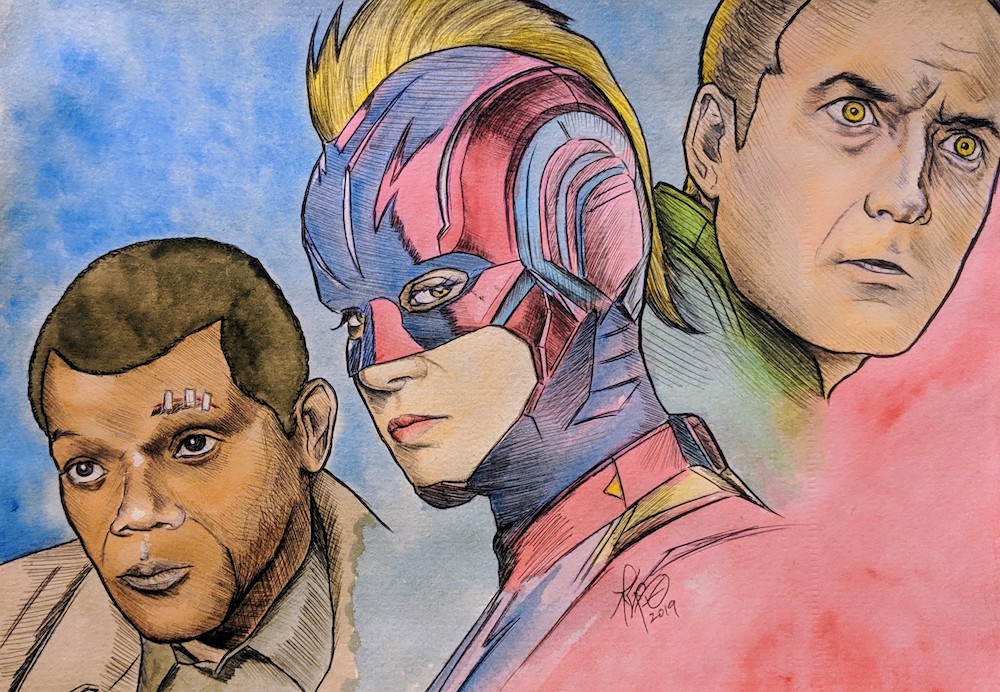 Get ready for a blast from the past with CAPTAIN MARVEL, the twenty-first film in the Marvel Cinematic Universe.  Unlike all the other films in the MCU, this one takes place in 1995 rather than present day and it explores parts of the universe that have only been touched on before now. Vers is an aspiring Kree warrior on Hala, the capital planet of the Kree empire, who is eager to prove herself.

However, she is driven by emotion and plagued by strange nightmares which puts her potential into question.  She is given a chance to prove herself on a mission to pull out an undercover agent before the Skrulls (shapeshifting sworn enemies of the Kree). The rescue goes sideways and Vers finds herself a Skrull captive, at least until she fights her way free and hijacks an escape pod.  She crashes in Los Angeles and is quickly confronted by SHIELD, specifically Agent Fury, who is skeptical of her claims to be from space until a Skrull attack opens his eyes to the possibility that she is on the level. Everything is not as it seems though, and as Vers tries to beat the Skrulls to a hidden piece of technology everything she knows about herself will be called into question as she tries to figure out exactly who she is and what she is fighting for.

The overall story of Captain Marvel is quite good.  It takes a different path from the well-trod superhero origin movies by taking the typical good guy versus bad guy motif and adding a few twists and a mystery/puzzle subplot that delivers a fresh experience, even if it isn’t done perfectly.  I was a bit annoyed by some of the retconning that was done in this film, most notably the use of the SHIELD acronym which had its own origin put forth in IRON MAN, which takes place more than a decade after this movie. However, most everything else thrown in works, and the story arcs for Nick Fury and Phil Coulson were a fun look at the past of two beloved supporting members of the MCU.

The humor in the movie was a bit hit or miss for me, not reaching the levels achieved by the Guardians of the Galaxy films or THOR: RAGNAROK, but it played well enough for the movie to not take itself too seriously, which is an important distinction of the Marvel brand. Lastly, I have to mention Stan Lee’s cameo, as it was a brilliant moment that, unlike in other Marvel films, just had him as himself, and which was a great way to put him in this flashback film.

Visually, CAPTAIN MARVEL is fun but not quite up to the level I have come to expect from Marvel films.  The most notable flaw was during the space battle towards the end of the film. It’s a fun fight and I loved the Captain Marvel full costume they used, but it just doesn’t look or play as well as the space action in the other MCU films that have come out this phase.

The design of the film was fun and they went hard to emphasis the 1995 timeframe of the film, using plenty of music, clothing, and location choices to reinforce it throughout the film. I could see where some people might find it overbearing and distracting, but I took it for the fun it was intended to be and largely enjoyed it.  The action sequences are fairly well done, if typical superhero fare, and most of the time the quick cuts aren’t over bearing so I could follow the action, which was nice.

The performances really sell this movie, and it definitely felt like more of an ensemble than most superhero films.  Brie Larson (KONG: SKULL ISLAND) takes on the role of Captain Marvel, and she is a little hit or miss in the role. When Vers/Captain Marvel/Carol Danvers is being a badass, Larson shines and is a ton of fun in this role.  However, she does come off a bit wooden at times in more toned-down moments of the film and there was even a point on the Skrull ship where her delivery felt so out of character that it jolted me. This could be due to there not being enough there to work with or questionable directing, because Larson can certainly deliver the goods when well directed, and I hope that, going forward, the stiffness mellows and this character feels more lived in.

Returning as Nick Fury is Samuel L Jackson (INCREDIBLES 2) and is super fun as the younger, less serious Fury. Jackson has been playing Fury for over a decade now but he gave the character some youthful exuberance here that made him more relatable than the gruff leader who we know and love.

The biggest surprise of the film was Ben Mendelsohn (ROGUE ONE) as Talos, the leader of the Skrulls. Talos gets a heavy dose of character development throughout the film, and Mendelsohn maneuvers the changes flawlessly, delivering a nuanced performance and creating a character I won’t soon forget.  Jude Law (FANTASTIC BEASTS: THE CRIMES OF GRINDELWALD) takes on the role of Yon-Rogg, the leader of the Kree team that Vers is a part of. Yon-Rogg isn’t as fleshed out or as complicated as I would like, but Law does a decent job with what’s there, giving us a perfect military commander who isn’t afraid to turn up the intensity when it’s needed.

Lastly, Annette Bening (20TH CENTURY WOMEN) plays both Dr Wendy Lawson and the Supreme Intelligence and she does a great job with them. Bening is an incomparable actress and she nails these roles, making the Supreme Intelligence the arrogant know it all that the name implies and giving Lawson a warm hearted, human touch, despite the character’s small amount of screen time.

CAPTAIN MARVEL is a fun ride that fits snuggly in the middle of the pack of MCU movies.  It has a solid story, some decent acting, and it tends to be a fun ride from start to finish.  It doesn’t have the gravitas of BLACK PANTHER, but it certainly opens up the Marvel Universe and keeps you entertained.  If you like MCU films, or are just a fan of comic book movies, then head on out to the theater and check this movie out, you’ll be glad you did.