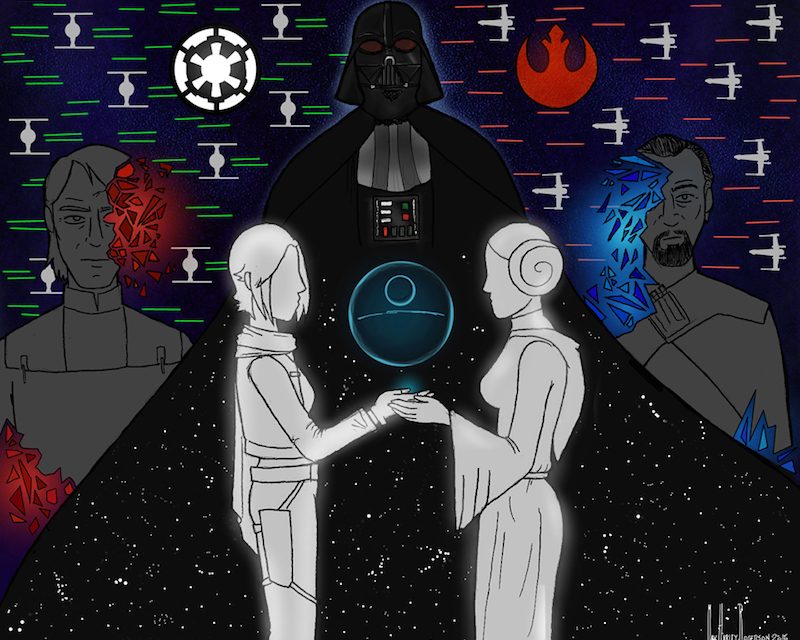 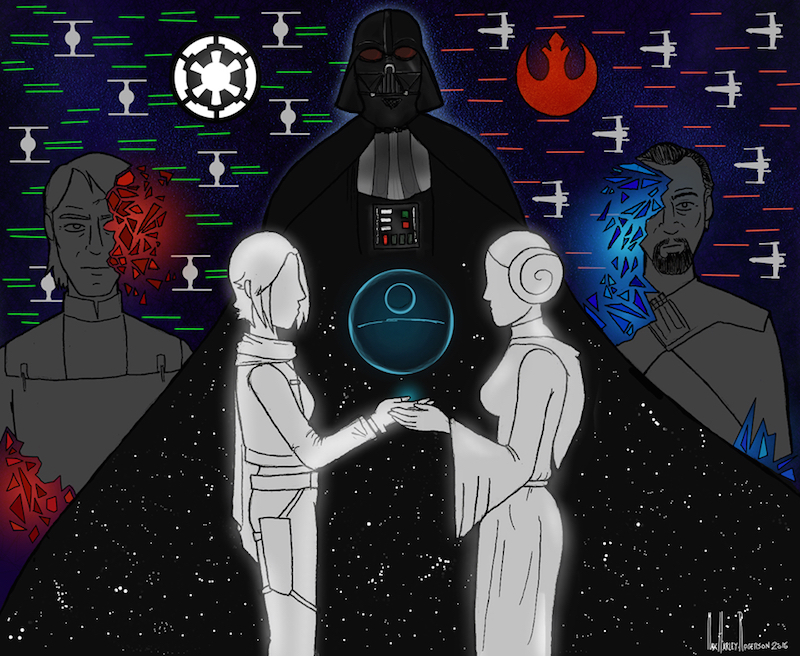 WARNING: This review is full of spoilers, see the film first!

I’m a shameless STAR WARS super-fan. Nothing matches the influence of the original trilogy, I completely adore the prequel trilogy, THE FORCE AWAKENS was a fun way to kickstart the franchise again, and I gobble up all the TV shows, video games, comic books, and novels now that the canon has been reset. That said, I highly recommend reading James Luceno’s prequel tie-in novel CATALYST as it most definitely heightened my experience with ROGUE ONE: A STAR WARS STORY.

Disney and Lucasfilm are committed to bringing us a STAR WARS film each and every year forever. And I’m just fine with that. In-between the numbered “Skywalker” films, we are getting standalone films that flesh out the universe and hone in on key characters. The options are pretty much endless. Director Gareth Edwards (2014’s GODZILLA) tackles our first side-story outing ROGUE ONE which involves the early days of the Rebel Alliance as they attempt to steal the plans for the Death Star, setting up the epic saga that follows beginning with A NEW HOPE.

The best thing I can say about ROGUE ONE is that it completely honored the spirit of STAR WARS without overwhelming us with unnecessary parallels to previous films. While I think THE FORCE AWAKENS was a fun romp, it just straight ripped off all the story beats from A NEW HOPE. So much so that it took away from my overall enjoyment. THE FORCE AWAKENS was a remix of a song I’ve liked for years, while ROGUE ONE was a whole new track the compliments that song and makes it even better. It honored the franchise so well including bits from both trilogies and somehow captured the essence of classic STAR WARS in a way I never imagined possible. It can be done!

While I’m not going to get overly political here, I can’t tell you how refreshing it is to see a multicultural cast lead by strong women. Awesome. Our lead Jyn Erso (Felicity Jones) is a wonderful heroine and extremely likable in this role. Her aforementioned rag tag crew is also pretty damn amazing including the reluctant scoundrel Cassian Andor (Diego Luna), his brutally honest Imperial droid K-2SO (Alan Tudyk), the stoic blind warrior Chirrut Îmwe (Donnie Yen), his gun-toting buddy Baze Malbus (Wen Jiang), and the timid pilot Bodhi Rook (Riz Ahmed). Fate seemingly brought them all together for this adventure and they all have an important role to play. It was fun watching Jyn and Cassian test their morals so greatly. K-2SO stole every scene he was in and added a lot of much needed comic relief amidst all the doom and gloom. I was in awe of Chirrut and his fighting prowess guided by The Force. He would have totally been recruited by the Jedi Order if it still existed at this point in time. His partner in crime Baze was force to be reckoned with as we often see him dispatch large groups of Imperial scum in spectacular ways. And the crew’s pilot Bodhi rounded out the team always trying to prove he was one of the good guys. The underlying theme between them all was that they were true Rebels all willing to risk their lives for the bigger picture. And they did. Easily one of the best ensemble casts I’ve seen in a long time.

Jyn’s father Galen Erso (Mads Mikkelsen) and the overreaching Imperial officer Orson Krennic (Ben Mendelsohn) were wonderful characters that I guarantee you will like even more if you read the prequel novel CATALYST. Watching the tension between these former friends and co-workers was intense and I have a huge respect for both Mikkelsen and Mendelssohn as actors. And while he wasn’t around all that much, Forest Whitaker’s Saw Gerrera was a welcome and creepy addition with a powerful presence serving as Jyn’s mentor. It’s also cool seeing him here in his old age juxtaposed with his appearance in THE CLONE WARS cartoon. Adding Bail Organa (Jimmy Smits), Genevieve O’ Reilly (Mon Mothma), and that mostly CGI incarnation of Grand Moff Tarkin was extremely welcomed and helped tie everything together. But by far the most interesting addition was Darth Vader voiced by James Earl Jones. Of course right!? He didn’t steal a lot of screen time, but every second he was there was absolutely captivating. Seeing him holed up in his eerie castle on Mustafar soaking in that Bacta tank, watching him force choke Krennic to his knees, and witnessing his brutal strength against this Rebel fighters was a sight to behold. Epic stuff. And yes, the quick shot of young CGI Leia was the cherry on top. It was all so well done, tasteful, and really created an experience that just screamed classic STAR WARS.

I’m so grateful ROGUE ONE exists. I think it’s the STAR WARS film a lot of people wanted ever since RETURN OF THE JEDI. While you will never catch me bashing the prequel trilogies, I have to admit that this is exactly the type of film you want to make for those seeking a similar experience to the originals. ROGUE ONE does something any prequel or sequel should. It makes you want to re-watch the A NEW HOPE, and when you do, it completely heightens the experience. Yes, watching A NEW HOPE is even better than before thanks to ROGUE ONE and that’s a fact. The hugely diverse and talented cast nailed it. The universe was alive and well showcasing cool characters, creatures, locals, and vehicles. And the tone recaptured that initial magic that made us all fall in love with this series in the first place. The bar for what a STAR WARS film should look like just got set dangerously high. Bring on EPISODE VIII and the young Han Solo spin-off. I’m ready.

And now for some nerd therapy. Here are some things on my mind:

Seriously people, Read the novel CATALYST and then watch ROGUE ONE. Am I the only one who wished that the cast of REBELS would have been more involved in this? We see Chopper, we see The Ghost, and hear someone call for General Syndulla, but that wasn’t enough! And Syndulla could be either Hera OR her father Cham! Seeing R2-D2 and C-3PO for just a second or two was perfect. Darth Vader living in a dank-ass looking castle on Mustafar soaking up some Bacta was kind of scary and tragic and sad. That blue milk still looks delicious and I want some. Bumping into Ponda Baba and a full-nosed Dr. Evazan was cool but almost too fan servicey…Almost. I seriously had chills of excitement during some of the space battles. They were just perfect. Where the fuck was Admiral Ackbar! CGI Tarkin did not bother me. I thought it looked great. Young Leia looked great too. Genevieve O’ Reilly as Mon Mothma is a dead ringer. I really want to talk to someone in person about how I think Chirrut WOULD have been in the Jedi Order. It was refreshing seeing a STAR WARS film where a huge Death Star doesn’t blow up. I’m secretly not excited about a Han Solo film…yet. What I really want is an Obi-Wan film. ROGUE ONE is awesome.