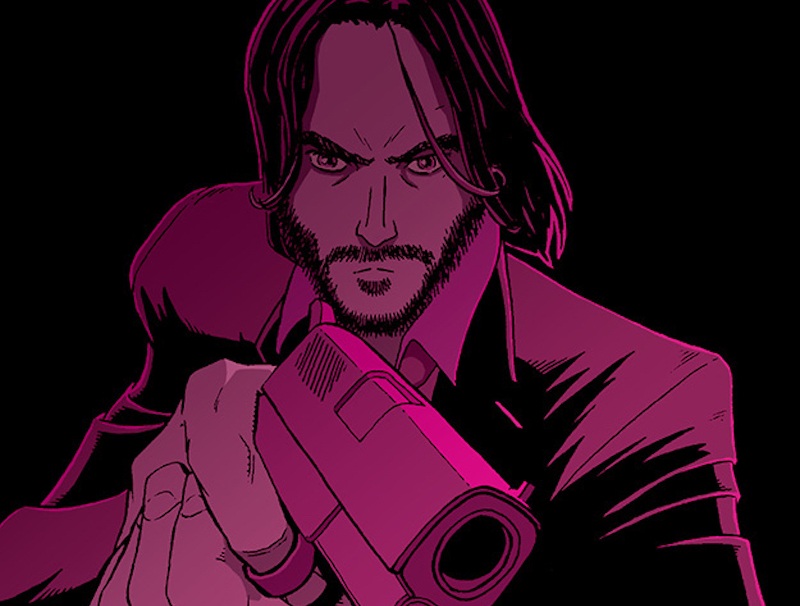 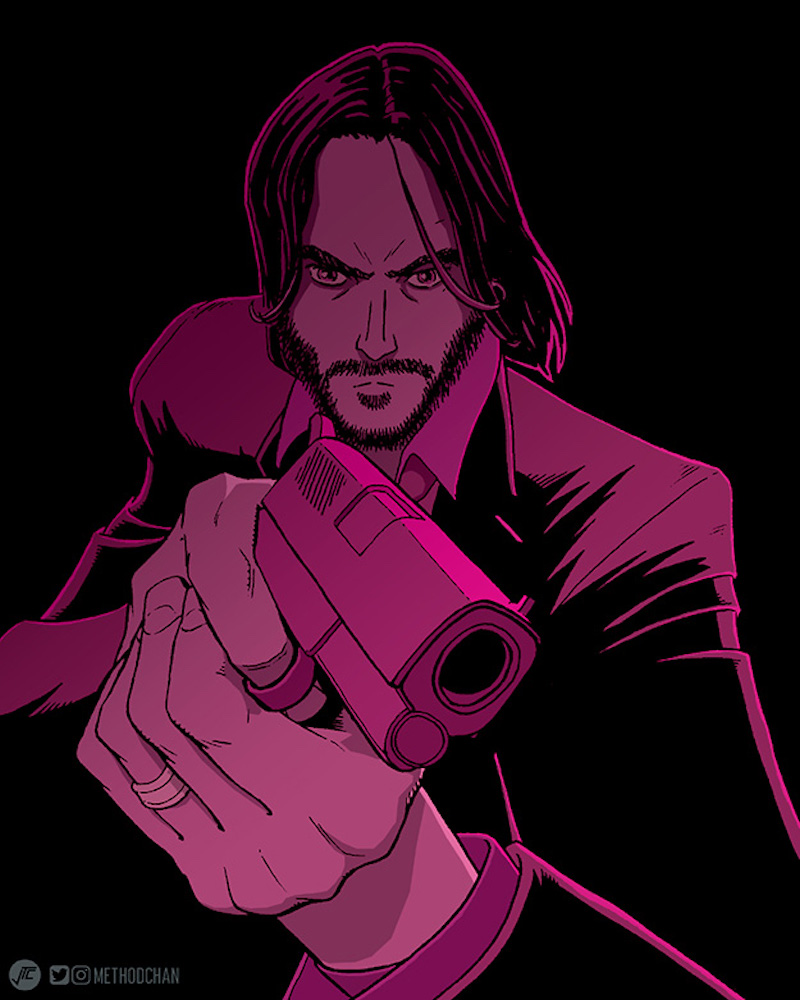 Run, Johnny. Run. The world is out to get you. Hot off the heels of John Wick breaking one of the High Table’s most sacred rules in JOHN WICK 2, JOHN WICK 3: PARABELLUM begins with our boy racing from the consequences. With only an hour left before his excommunicado goes into effect, John is desperately trying to get some footing before a world of assassins come crashing down upon him. Much like how the JOHN WICK franchise continually raises the bar for action films, I will attempt to elevate my review style by listing off the ABC’s of JOHN WICK 3: PARABELLUM. A feat dare not attempted by no sane nerd.

A is for the Adjudicator (played by genderqueer actor Asia Kate Dillon) who embodies the High Table’s displeasure with those who helped John commit that unrighteous murder.

B is for Baba Yaga. The dark side of John Wick (Played by Keanu Reeves) that he must choose to become again in order to survive.

C is for Casablanca. Where John must begin his path to redemption. It’s where he meets Berrada (Yes, it’s Bronn from GAME OF THRONES) and engages in one of the most chaotic fight scenes ever filmed.

D is for Deconsecrated, which the Continental is classified once Winston (Ian McShane) refuses to comply with the demands of the Adjudicator. War?

E is for Excommunicado which John is deemed after breaking the rule of committing murder on Continental Grounds. This is the action that puts the bounty on John’s head and plunges his world into further chaos.

F is for the Finger that John removes in order to prove his loyalty to The Elder and renew his commitment to the High Table. By going down this path, John is committing his life to their dark will.

G is for guns, which John goes through a lot of.

H is for Horses, which John weaponizes in an outstanding stable fight. 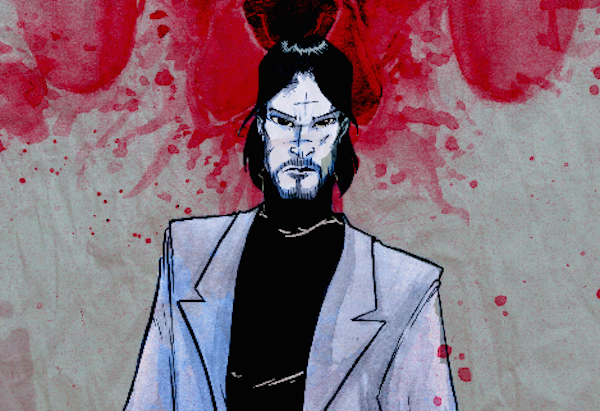 I is for Improvements, which the High Table’s army has undergone. They breach the walls of the Continental in advanced armor that forces John to rethink his tactics. MORE GUNS!

J is for Jardani Jovonovich, which is revealed to be John’s original name. A refugee from Belarus, John was taken in and trained by The Director (played by Anjelica Houston) as a young child. We see that the next generation of “John Wicks” are currently being trained.

K is a Knife fight, which there are plenty. One, in particular, occurs in a knife museum that is brutal and fast and brutal.

L is for Legacy which John grapples with. He fights for his life so that the memory of his wife can live on. It’s a question of what kind of man John wishes to be during that time.

M is for Marker, which John brings to Sofia (Played by Halle Berry) in exchange for her help. Assisting John during his excommunicado means death, so, her decision to help him must mean she owes John a pretty big favor. Or perhaps she questions the rule of the High Table?

N is for Ninjas which there are a lot of hiding in the shadows. The two that stand out are played by Yayan Ruhian and Cecep Arif Rahman (THE RAID). Their fight scene with John is beyond compare and brings a much needed moment of levity to the film.

O is for One Week WHICH IS HOW LONG ALL THREE OF THESE MOVIES TAKE PLACE. Is he eating?

P is for Para Bellum, which is Latin for “Prepare for War.” Which John must do if he ever wishes to regain peace. Parabellum is also a gun word? I dunno.

Q for Questioning your loyalties. We learn that aligning yourself with the High Table strips you of your right to decide your own future. John had to perform an ‘impossible task’ in order to gain his freedom in the first place. Throughout PARABELLUM, many characters are forced to either kneel to power or stand in its path.

R is for the Request the Elder makes of John in exchange for undoing his excommunicado. The High Table demands that John kill Winston and help transition the Continental to new management. 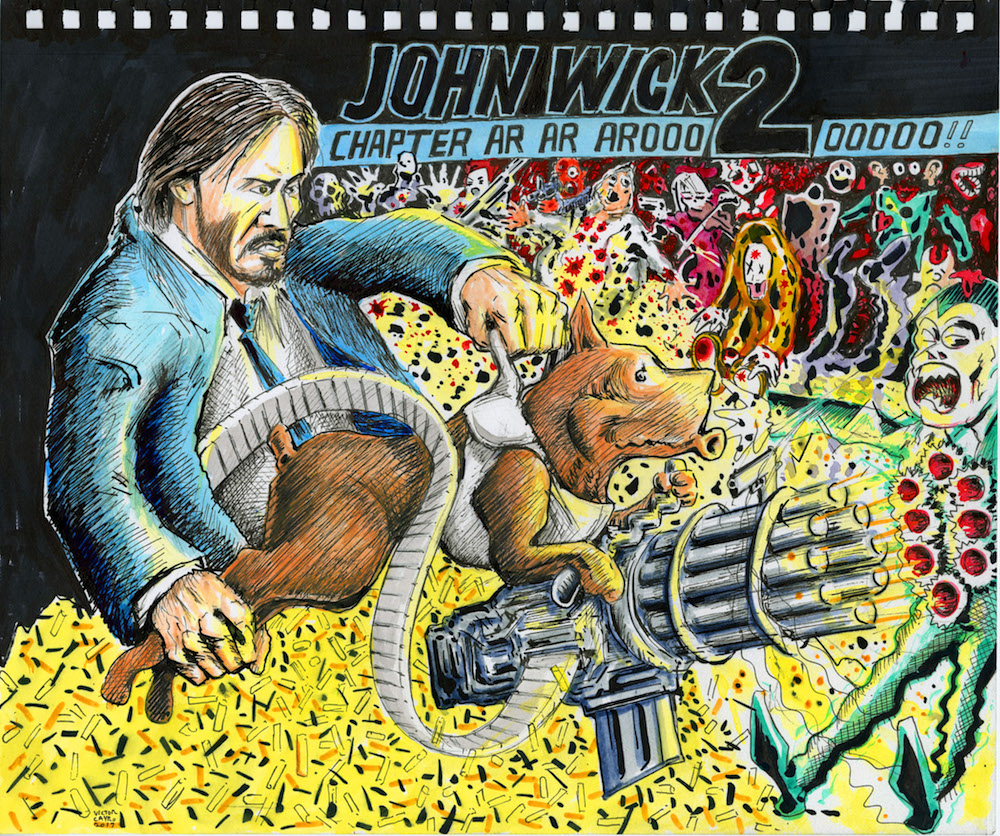 S is for Suit because who doesn’t love a good bulletproof suit? Actually, let’s go with S is for Sofia. Halle Berry definitely trained hard to play this badass. One of the more fascinating aspects of her character was the use of two highly trained Belgian Malinois. The choreography of their fight scene is mesmerizing. I was in awe watching John and Sofia take out an entire complex of bad guys while two tactical dogs criss-cross them dismantling threats.

T has to go to Tick Tock Man played by Jason Mantzoukas. Seeing the “Heynong Man” in a JOHN WICK movie was one of the many highlights for me.

U is for Unnecessary which is what the close up scene of a knife slowly sliding into some dude’s eye was. Okay. It was amazing. The whole audience cheered. The girl ripping off her own toenail though… Eek.

V is the Vagrant army that exists at the pleasure of the Bowery King (Played by Laurence Fishburne.) The varying worlds of JOHN WICK explode open in this installment. Originally, it seemed that the Bowery King existed under the world of the High Table. Nope. Not really. Kinda?

W is for our main man Winston. Manager of the Continental. The one who convinces John to spare his life, in exchange for helping him live a life worthy of his wife’s memory. Winston is also the dude who ends up betraying John in order to regain standing with the High Table. Big mistake. Huge. It was good to see Lance Reddick (FRINGE) get in on some of the action.

X is for I’m going to need some XTRA letters to fully talk about all the amazing things in this film. The accounting firm that tracks bounties, catalogs establishments and is full of tattooed rockabilly gals. The Russian assassin training center where young girls practiced ballet and young boys grappled one another. The motorcycle scene. The parts on the horse. PARABELLUM is like, 20 action movies in one.

Y is for Yeah, this movie is amazing and you should definitely see it in theaters.

Z is for Zero, Played by Mark Dacascos. Leader of a clan of ninja who are recruited by the Adjudicator to enforce their judgment. An actor could have easily played this character as a cliche, but Dacascos brought levels of humor and originality that really elevated the role.

JOHN WICK 3: PARABELLUM does something very difficult. It takes the third installment of an action franchise and somehow elevates it. I’d be hard-pressed to list another trilogy of action films that maintain this level of momentum. (MISSION IMPOSSIBLE, maybe?)  Everyone in this movie is giving 100%. From the acting to the action choreography, this movie is a work of art. Part of me understands the conflict of enjoying something so violent while abhorring actual violence. The grace in which these characters move seems to transcend the violence to an artistic level. I know that sounds corny, but, it’s the only way I can articulate the warmth I felt watching this movie. Keanu is a god damn treasure and we must do whatever it takes to protect this man.