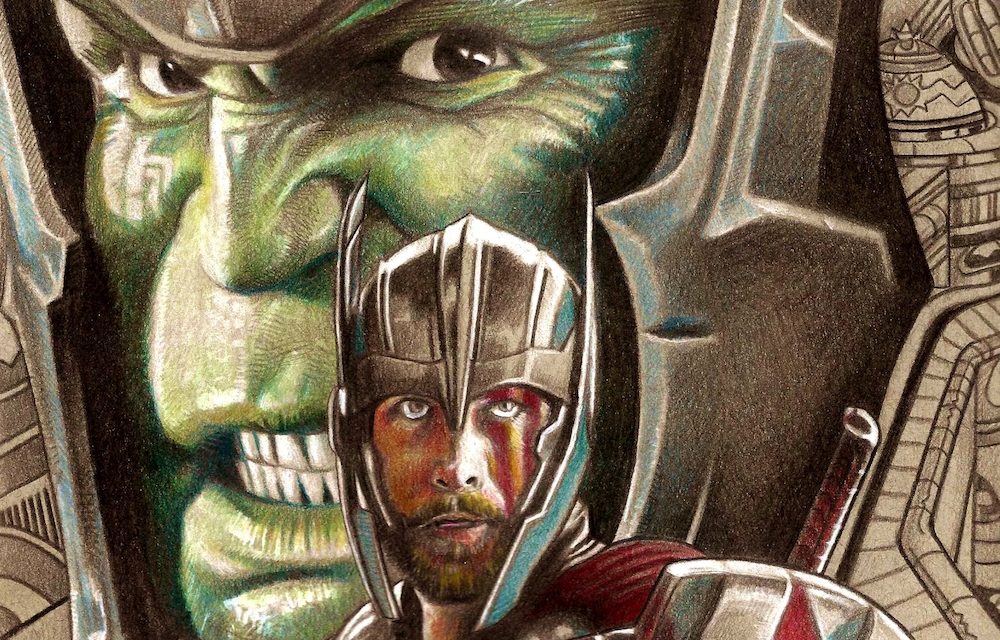 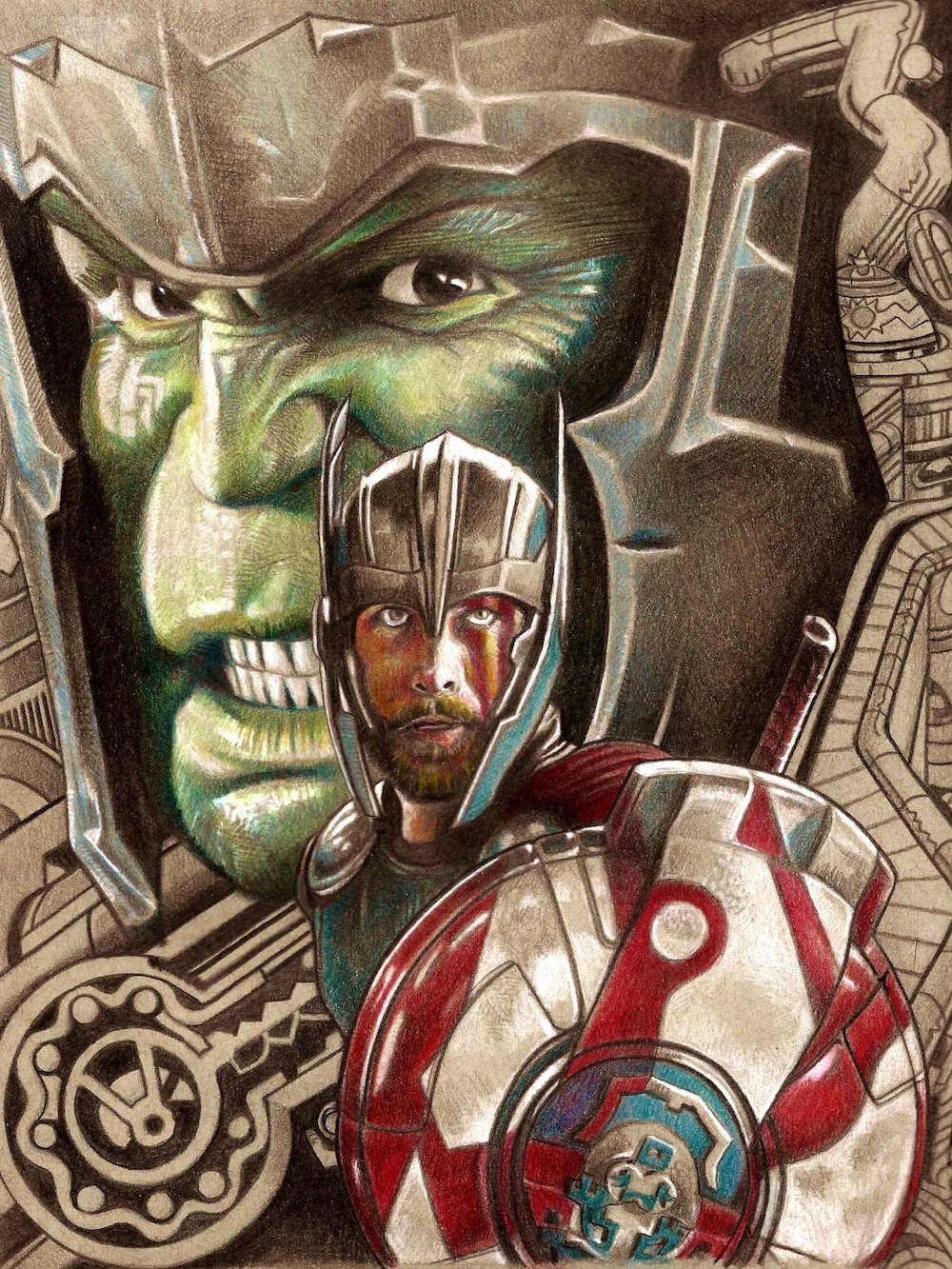 There is no denying Marvel Studios’ massive success, and part of that success is due to their ability to adapt to changes in demand and market.  As such, their latest offering THOR: RAGNAROK pivots away from the serious, yet often times comedic, feel of the first two and instead goes full tilt into the comedic superhero genre that has found popularity thanks to films like DEADPOOL and GUARDIANS Of THE GALAXY.  While some more traditional fans may be turned off by this change, I can see why Marvel went this direction.  After all, these types of movies have a proven track record at the box office, and this installment boasts a far more bizarre and fantastical story and setting than its predecessors.

While the narrative in THOR: RAGNAROK certainly provides a hefty dose of entertainment, it is far more rushed and contrived than the previous THOR films.  Almost from the start we have a breakneck pace as Thor defeats a norse demon, supplants Loki (who had tricked his way back onto the throne in the guise of Odin), finds and loses Odin, and is vanquished by his formerly unbeknownst sister, Hela, and that’s just the film setting things up.  This pace leaves little room for characterization and depth, but hey, it’s a superhero film so no one will care, right?  Hela is one of the two most intriguing characters, but we never get enough of her backstory to truly be satisfied, instead we are placated with the equally interesting but just as poorly fleshed out Grandmaster, the tyrannical leader of Sakaar, a planet that serves as a dumping ground for the flotsam and jetsam of the universe. This is where Thor and Loki end up after their first encounter with Hela.

Rather than develop a deep, impactful story, the film decides to bring in the Hulk as the Grandmaster’s champion and pit him against Thor in a battle built for violent fan service and proves to be just as fun as it sounds. Like any good superhero, Thor eventually manages to wrangle the Hulk over to his side and he gathers a team to take on Hela and you can pretty much guess what goes on from there.  Is the story deep, moving, or universe shaking? No.  Is it fun, silly, and designed to keep you smiling when you aren’t shoveling popcorn into your face, you bet!

Visually, Ragnarok is everything you could want from a space based Marvel film.  There are some interesting realms and planets displayed, each with a unique feel even if it’s only a passing and unimportant location.  There are a variety of spaceships and even a cool cityscape for the more science fiction inclined fans. And the costumes are a notable combination of typical comic book fare and science fiction fantasy, elaborating on the traditional look of the franchise but in a way that works and feels appropriate. The camera work is straight blockbuster fare, with lots of fast cuts, fast scenes, but with an added dose of longer shots to let comedic moments play out, all of which work well for the film.

While none of the performances are particularly deep, they are rather fun and that has to do with the terrific pool of talent that THOR: RAGNAROK brought together.  Chris Hemsworth (THE HUNTSMAN: WINTERS WAR) has played Thor so many times now that playing him more comedic seemed effortless, and while this outing is nowhere near as endearing and memorable as the first, he delivers a satisfying performance.  The always enjoyable Tom Hiddleston (KONG: SKULL ISLAND) returns as Loki and we actually get to see some growth to the character, even though it feels temporary.  Hiddleston is still fun as the selfish trickster god, and with just a slight adjustment to his expressions he turns Loki from menacing to playful, and steal scenes while he does it.

The first new addition to the cast is Cate Blanchett (THE HOBBIT: THE BATTLE OF THE FIVE ARMIES) who takes on the role of Hela, and while we don’t get nearly enough of her backstory to satisfy, Blanchett gifts us a villain who is ruthless, witty, and exceedingly fun.  Jeff Goldblum (INDEPENDENCE DAY: RESURGENCE) delivers a delightful performance as the Grandmaster, making the strange despot unflappable and surprisingly friendly despite his iron fist approach to ruling.  Every time I see Tessa Thompson (CREED) she delivers a better and better performance, and her turn as Valkyrie is no exception.  Thompson adds heart and warmth to a character that is, by definition, powerful and hard, creating an engaging version of the legendary warrior race.  Karl Urban (STAR TREK: BEYOND) is one of those great character actors who always seems just a step away from breaking into a larger role, and that is exactly what was needed for Skurge, an underhanded and opportunistic Asgardian.  Urban gives Skurge the right mix of arrogance, ambition, and cowardice to create one of the more complex characters of the film and one that will leave you smiling more often than not.

And Last but certainly not least is Mark Ruffalo (SPOTLIGHT), who delivers one of his largest performances of the Hulk yet.  Ruffalo is forced to play a dualistic character, and to that end he is phenomenal, easily switching between portraying an id driven rage monster and an often at a loss scientist who wants little to do with the circumstances his counterpart is always dragging him into.

THOR: RAGNAROK is a perfect popcorn superhero film.  The plot is thin but provides enough fuel to move the characters along, it’s a delight for the eyes, and it has enough top talent to make anyone salivate.  This will certainly not be remembered as the best film of “phase three” of the Marvel cinematic universe,  but it will by no means be at the bottom rung either. If you dig comic book movies, especially comedic ones, then head on out to the theater and check this one out, you’ll almost certainly have fun.