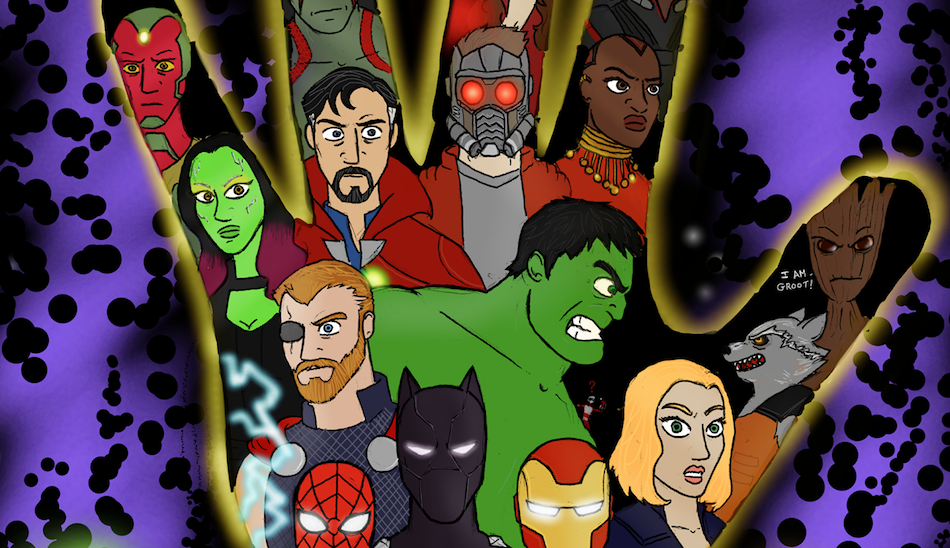 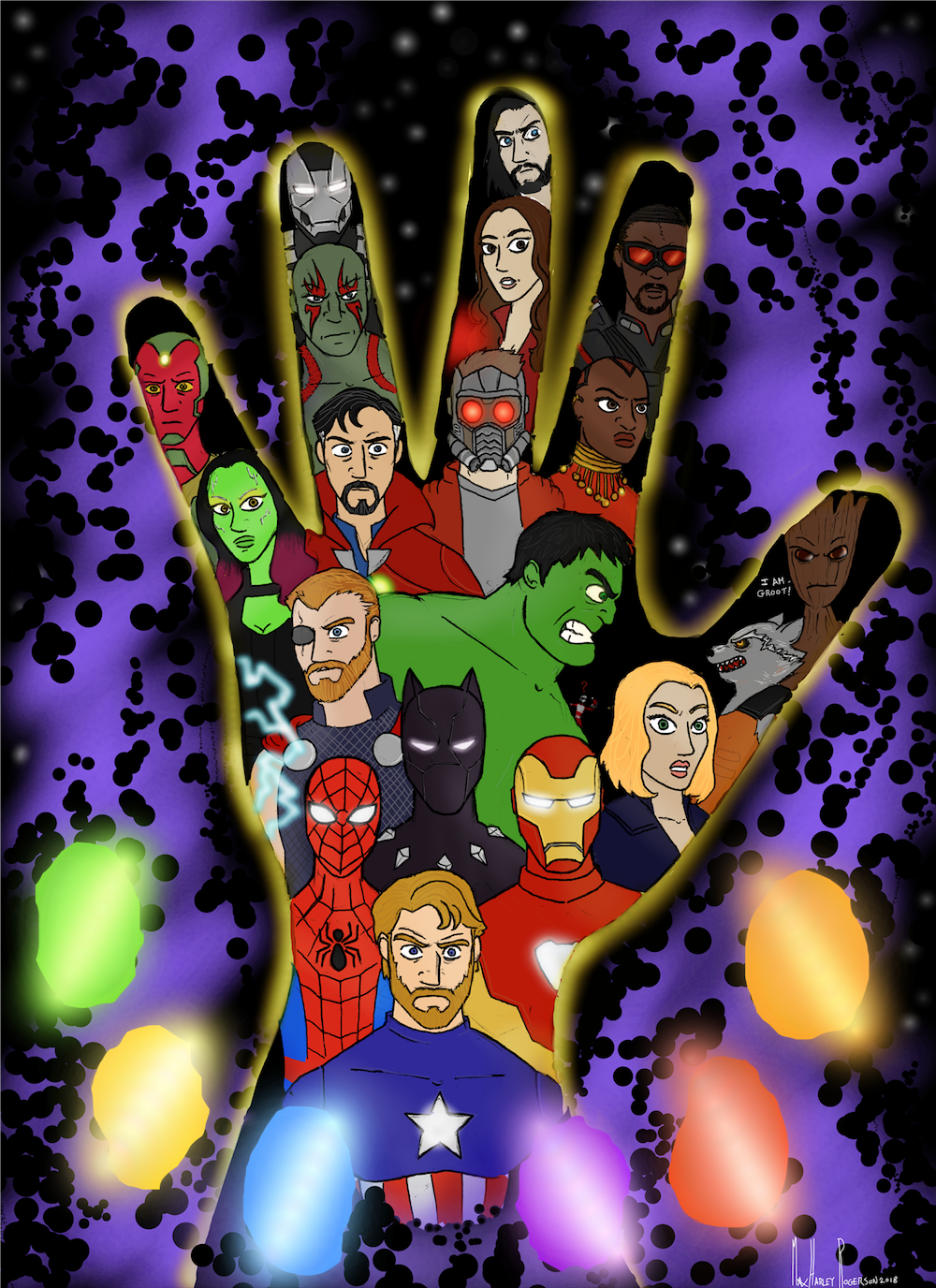 I first started reading comics in 1990, at the formative age of eight.  I would save my allowance and hit up the local comic shop searching for anything that looked cool.  My first loves were Spider-man and The Hulk, and soon they were both featured on the cover a comic called The Infinity Gauntlet, so, of course, I picked it up.  That was my first introduction to a major comic crossover event, and it was glorious! The stakes were oh so high, there were more characters than I could count from every corner of the Marvel universe, and the villain, Thanos, was the most impressive and powerful antagonist I had ever seen. The first AVENGERS film was the culmination of the first five Marvel Cinematic Universe (MCU) films and an excellent team origin story, but now, six years after the first film and ten years since the launch of IRON MAN, Marvel Studios has finally brought the first true major crossover event to the MCU, and it is everything I hoped for and more.

The premise for AVENGERS: INFINITY WAR is simple: Thanos wants the infinity stones and the Avengers, and everyone else in the MCU, want to stop him.  That is all you need to know and all that needs be said, because, like any good universe wide crossover, major events come hard and fast in the movie and not a single one should be spoiled.  If you haven’t seen the previous films in the MCU, or have missed one here or there, INFINITY WAR is still enjoyable, but you may be a bit out of the loop with some of the storylines and there is so much packed into the movie already that it has no time to catch you up.  However, that is exactly how this movie should be, a crossover event can stand on its own, but for the true depth of story you need to be familiar with what has been going on in all the other storylines, and with that comic book mentality in mind, this movie is a roaring success.  There are payoffs that will have even the most stoic of fanboys gushing and paradigms shift in delightful ways that are sure to be, if not pleasing, then certainly interesting. Despite the scope of the film, there is still plenty of the humor and heart that MCU films have come to be known for, and characters meeting for the first time provides plenty of fertile ground for these moments.

The Russo brothers (CAPTAIN AMERICA: CIVIL WAR) have a deft hand at filming superhero battle sequences, and they have achieved a new pinnacle in INFINITY WAR.  The fighting is fast paced but well covered, allowing the audience to feel the excitement and peril of the moment while being able to easily follow the combat. During one showdown with Thanos on his home planet, there is an incredibly fast paced sequence that has multiple people attacking him, and while you don’t always know where each one is, every contact is covered and understood, allowing you to easily follow who is accomplishing what.  These sequences are tricky, and they can leave you terribly disappointed if not handled well (looking at you BATMAN V SUPERMAN: DAWN OF JUSTICE), but the Russo brothers manage to create a sequence that is as impactful as it is engrossing and it left with me a wonderful feeling of satisfaction. Beyond the combat, the various locations in the film are well handled. We see plenty of countries, planets, and ships throughout the film, but they are all distinct and have their own feel, which aids in establishing and keeping the fast, but appropriate, pace of the film.

As INFINITY WAR is the culmination of so many long building storylines and has such an expansive cast, it is difficult to single out above and beyond performances.  After all, most of these actors have been with these characters for years and have become incredibly comfortable with them and while it is fun to see them crescendo, the performances that have stuck with me are largely from characters who have previously had more of a supporting role.  First and foremost, Josh Brolin (INHERENT VICE) is phenomenal as Thanos. Brolin has a range that is too often underutilized, and we get to see him flex his acting muscle quite a bit here as Thanos strives to achieve his near impossible dream. Brolin gives Thanos all the gravitas of a man possessed by singular vision and staunch devotion, and it is enthralling to watch his epic journey and the obstacles that he faces.  I was particularly impressed with Zoe Saldana (STAR TREK: BEYOND) as she reprises the role of Gamora, one of the Guardians of the Galaxy and estranged adopted daughter of Thanos. Gamora comes into her own in this movie and we get to see her be more vulnerable and fierce than ever before, and Saldana nails this, delivering a performance that is powerful and nuanced. Returning as Doctor Strange is Benedict Cumberbatch (TV’s SHERLOCK) and his spot-on performance and chemistry with the other cast members make him a scene stealer.  Lastly, there was a delightful appearance by Peter Dinklage (GAME OF THRONES) as Eitri, a giant dwarf. The role is small, but important, and it requires a certain level of reserve and intensity, which Dinklage effortlessly delivers. These are the standouts, covering each and every actor with their respective character would take eons. We’ll save that deep-dive for our inevitable NERD podcast.

If you’ve seen the other MCU films, then you absolutely do not want to miss seeing this one on the big screen, as it is one of the best superhero thrill rides ever created.  If you haven’t seen the other films, then you may be a little lost, but there is still plenty to enjoy and I’d still recommend checking it out, but maybe after a bit of catch up binging.  For true blue comic book fans, AVENGERS: INFINITY WAR is everything you could want from a crossover event as it has a great story, impressive action, and is hugely impactful. If you aren’t familiar with the format, the movie may seem to lack some depth, but that is what all those build up films provided so that this film could be fast and sleek. This was the movie that bright eyed, eight-year-old me desperately wanted to see, and I can’t wait to see what happens in the 2019 sequel.