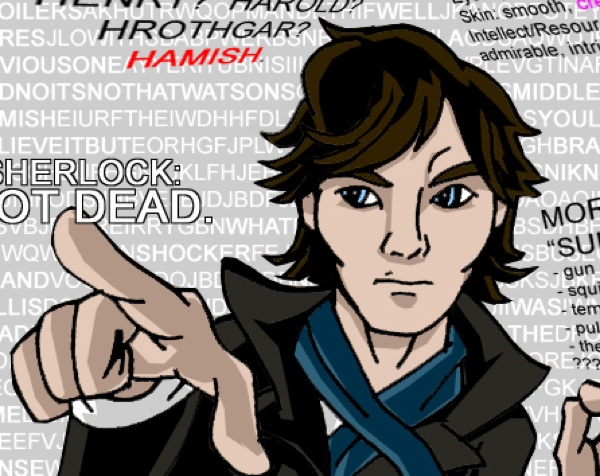 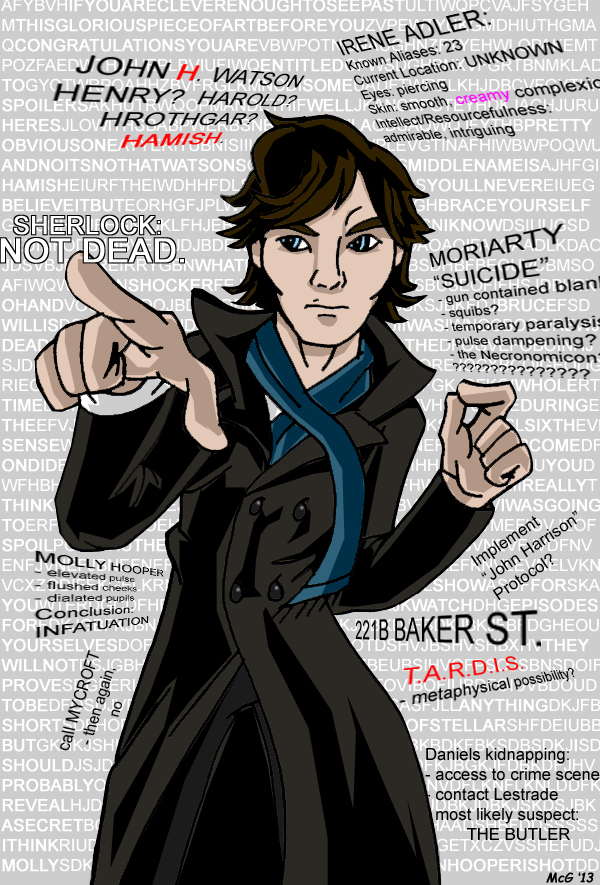 NOTE: Since SHERLOCK Series 3 has yet to officially broadcast in the US, I will refrain from revealing MAJOR SPOILERS in this review.  That being said, let’s talk about how Sherlock cheated death last time!

It’s pure terror for Dr. John Watson as he witnesses his best friend, the brilliant and infuriating sleuth Sherlock Holmes, jump to his death from the rooftop of St. Bartholomew’s Hospital, having been driven to suicide due to the evil machinations of his recently-deceased adversary: master criminal Jim Moriarty.  But all is not as it seems as Sherlock has fastened a bungee cord to his waist, snapping him back up from the pavement and instead crashing him through a window into the hospital where infatuated lab assistant Molly Hooper eagerly awaits.  While his homeless operatives delay John on the street with hypnotism and misdirection, Sherlock takes the opportunity to plant a passionate kiss on Molly and disappear from the scene of the crime, leaving his closest colleague and friend grieving over what he believes is the body of the infamous detective, but is in actuality the corpse of Moriarty disguised in a realistic mask of his hated enemy.

As the scenario unfolded before me, I couldn’t help but think that this (literally) death-defying explanation of the cliffhanger ending to Series 2 of SHERLOCK was way too corny and lucrative to be legitimate.  In fact, it sounded more like some wild speculation that a fan came up with in response to the last episode.  And I was proven right when it was revealed that the opening action sequence for the Series 3 premiere (“The Empty Hearse”) was actually a hypothetical account of events being provided by Anderson, former forensic rival of Sherlock’s who turned into a devoted admirer following his alleged death.  Anderson’s enthusiasm for the theory, coupled with the blank stare and verbal berating he receives from Holmes’ former ally Detective Inspector Lestrade in response, made me laugh out loud and quickly realize that, despite a few years on hiatus, the show’s ability to successfully translate Conan Doyle’s classic character for the 21st century was very much intact.  Even though we already knew from Series 2’s final moments that Sherlock was still alive, viewers have been speculating and theorizing about how our intrepid hero could have pulled off such and elaborate trick.  2 years-worth of fan theories and forum posts are given voice in the show by Anderson, a subtle acknowledgement and “thank you” to the fan base for waiting patiently for the beloved detective’s triumphant return.  SHERLOCK Series 3 is every bit as clever, intriguing and, at times, hilariously absurd as it was when show runners Mark Gatiss and Steven Moffat (DOCTOR WHO) first introduced the concept to viewers in 2010.

As with previous installments, Series 3 consists of 3 feature-length episodes that follow the exploits of Holmes and Watson as they tackle various cases and challenges thrown their way.  Without giving away too many details and spoiling any big reveals or surprises, here’s a brief rundown of each episode:

1. “The Empty Hearse”- Sherlock returns to London after being thought dead for 2 years to stop a terrorist threat and to reconnect with his friends and loved ones…especially his faithful friend Watson who has made some major changes in his life and may not be too pleased to see him.

2. “The Sign of Three”- a happy event may turn deadly unless Sherlock can solve two previously unsolved cases and discover their connection to the present threat.

3. “His Last Vow”- secrets are revealed, allegiances are tested and lives hang in the balance when Sherlock matches wits with a new villain named Magnussen, a businessman and media mogul who happens to be the master of blackmail.

Each of the episodes handle their subject matter and thematic elements with expert hands.  “Hearse” is focused less on the case and more on Sherlock’s reintroduction to his supporting players and (in some cases) his necessary redemption in their eyes.  “Three” has a more playful tone about it and provides a touching and entertaining reflection on the shared adventures of Holmes and Watson.  And “Vow,” while still providing moments of levity throughout, has one of the darkest and unexpected resolutions to a case I’ve seen on this show so far.  But all the while, it never feels like a chore to sit through all of the deductions and verbal fencing (something I feared would eventually burn me out on the show, but thankfully hasn’t happened yet).  Despite being overly clever with its mysteries and clues, SHERLOCK is still fun in its own unique way.  Other fans may argue that the series is a little too much fun this time around, but I would contest that this isn’t necessarily a bad thing.  The previous installments dealt with some heavy stuff quite a bit.  I think it’s only fair to let the characters indulge in some small modicum of happiness.  Especially Sherlock, given all the crap he had to endure at Moriarty’s hands 2 years ago.

All of the cast members are in top form.  It’s an absolute joy to see Benedict Cumberbatch (STAR TREK INTO DARKNESS) back as Sherlock Holmes.  The character is as sharp and direct as ever with his deductions and insults, but there is a softer side to the character that has spun out of the events of Series 2.  He recognizes the value of his allies and friends a little more openly now after having been separated from them for so long.  It takes it beyond the simple entertainment value of watching Holmes be a likable smart-ass as he makes genuine efforts to be more pleasant and want to connect with other humans.  As ever, nowhere is that more evident than with John Watson, played by Martin Freeman (THE HOBBIT: THE DESOLATION OF SMAUG).  The years of Sherlock’s absence have certainly had a significant impact on the character and, upon their inevitable reunion, Freeman plays the turmoil of relief and fury extremely well.  To alter the duo’s dynamic even further is the inclusion of another longstanding Holmes character given a modern makeover: Watson’s love interest Mary Morstan played by Freeman’s real-life partner Amanda Abbington (COUPLING).  Unlike John’s previous girlfriends, Mary is resourceful and stalwart enough to keep pace with both him and Sherlock, a trait that immediately carves out a section of respect from the detective.  Lars Mikkelsen (from the original Danish version of THE KILLING) provides a more reserved and coldly calculating main villain in Magnussen to contrast the wild and insane spontaneity of Andrew Scott’s Moriarty from episodes prior.  He is most certainly someone who can intimidate simply through the power of talk.

The supporting players also have plenty of opportunities to shine throughout Series 3.  Mycroft Holmes, played by show runner Gatiss, is still a cold-hearted dick of an older brother, but it’s nice to see him display a little more affection towards Sherlock from time to time (apparently they get very competitive not over chess, but the kid’s game Operation).  Rupert Graves (V FOR VENDETTA) as Lestrade provides a sensible and humorous foil for Holmes and Watson’s escapades.  Una Stubbs as landlady Mrs. Hudson is as motherly and hilariously aloof as ever and will sometimes take on the role of spiritual counsel to Sherlock due to Watson spending more time with Mary and having moved out of 221B Baker Street.  It’s a very enjoyable twist to see actor Jonathan Aris take the sniveling dweeb Anderson and turn him into a totally obsessed Sherlock fanboy.  And I’m happy that actress Louise Brealey (THE BEST EXOTIC MARIGOLD HOTEL) finally makes Molly Hooper more than just a bubbly assistant with a crush on Sherlock.  She comes into her own as an invaluable ally and pillar of support and while she may still harbor feelings for him, it’s good to see her be more assertive and independent…even if they are still adorable in their scenes together (pardon my brief moment of shipper fandom there)!

As always, SHERLOCK is a stylized treat for the eyes and how they go about visualizing Holmes’ methodology for deduction (a.k.a. the “Mind Palace”) is always compelling and creative.  The episodes are well-paced and any revelations, big or small, come off as genuine surprises.  It’s a surefire formula that keeps you invested in the mysteries right up to the end.  Even after Sherlock himself explains how he cheated death, you get the feeling that there is still more to it and that the character is winking at you from within the TV screen, not ready to let you in on all of his secrets.  It’s confusing, it’s frustrating, it’s cheeky…by God, it’s SHERLOCK!  And I enjoyed every second of it.

The downside is that now that Cumberbatch and Freeman are getting involved in more feature work, we might have a long while to wait until Series 4 arrives.  But with Series 3’s final jaw-dropping last-minute reveal and reports that both leads are enthusiastic about returning to work on the show as quickly as possible, we can only hope this means that SHERLOCK will soon be back and even better.  The game is on!

SHERLOCK Series 3 premieres in the US on Sunday, January 19th at 10pm on PBS!