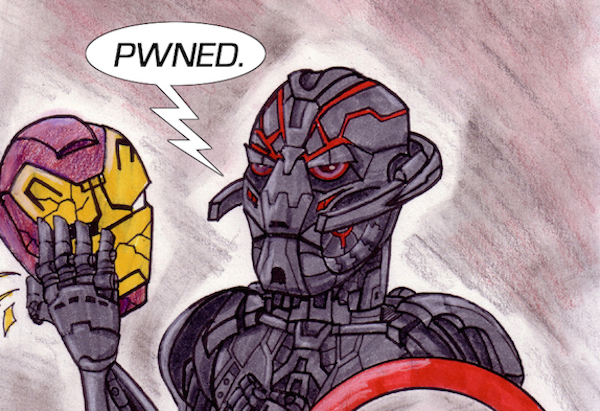 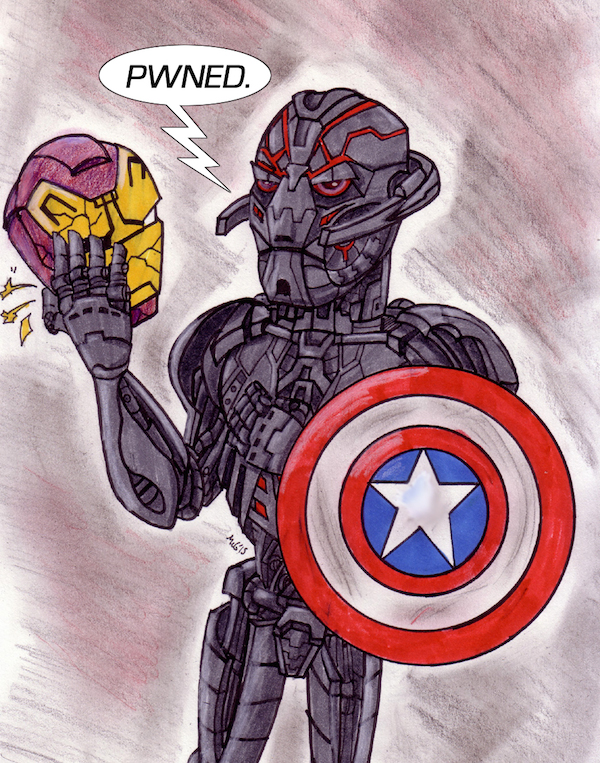 With AVENGERS: AGE OF ULTRON the Marvel cinematic universe takes a bit of a turn from what we are used to. While the first AVENGERS films was the grand culmination of phase one, AGE OF ULTRON feels less like a culmination and more like a death knell, but not in a bad way. All of the Avengers have had a rough time of it recently, as illustrated in IRON MAN 3, THOR: THE DARK WORLD, and CAPTAIN AMERICA: THE WINTER SOLDIER, and those frustrations and tensions have pushed them to the breaking point, so it’s not surprising that when Tony Stark sees an opportunity to make the world safe through the use of AI and robotics as opposed to heroes, he jumps at it, hoping to give everyone a much needed break. Unfortunately, the AI, Ultron, has other ideas and sets off to enhance himself and destroy humanity, as he feels the only way to protect humans from danger is to eliminate them, as they are a self destructive race who can’t seem to rise above their baser instincts. The Avengers scramble to track Ultron and stop him before he can set his plan in motion, but things don’t go quite as planned and the strain and lack of trust between various team members grows deeper. As the conflict reaches its climax actions are taken that will change the landscape of the cinematic universe as well as the Avengers for the foreseeable future.

While the story in AVENGERS: AGE OF ULTRON isn’t as compelling as the first film, it is a very necessary story in the overall arc that Marvel has been creating with its movies. Anyone who has read comics knows that major events seldom end with everyone happy and the status quo intact, rather they are designed to shake things up and move things into new territory, and while Age of Ultron succeeds in doing just that, the main story fails to be overly engrossing. The primary premise of the film relies heavily on the audience being well informed of the goings on of its predecessors, but without resolving any of the lingering conflicts of those films like the previous movie did, so it fails to deliver the catharsis I think many fans were expecting. In fact, the most interesting part of AGE OF ULTRON are the subplots, particularly the one between Black Widow and Bruce Banner, the one focusing on Hawkeye’s personal life, and the mystery surrounding Quicksilver and Scarlet Witch. Thankfully, these lesser plots give the die hard fans something to dig into and help distract from the main story that, while certainly a needed chapter in the overall movie universe, can’t quite live up to the hype.

As one would expect from a film helmed by Joss Whedon (MUCH ADO ABOUT NOTHING), AGE OF ULTRON has some noteworthy production values. While AGE OF ULTRON has a very polished look to it, I was disappointed at the frequent use of quick cuts, as they are prevalent throughout the film.  Yes, they may make it easier to implement special effects, but they make action hard to follow and, at least in my case, make it harder to remain engaged in what’s going on on the screen.  While the quick cuts were annoying, the special effects were spectacular.  Ultron looks amazingly real, despite the fact that he is clearly a cgi animated android, and his rage and insanity are palpable, kudos to the effects team that created him.  Also, despite the obvious fantastical nature of superheroes, all the heroes and their various powers and special abilities were appropriately done, they never look too over the top or insane, but they always looked impressive.

With such an extensive cast, it’s hard to give everyone the credit they are due.  Robert Downey Jr. (SHERLOCK HOLMES: A GAME OF SHADOWS), Chris Hemsworth (THOR: THE DARK WORLD), and Chris Evans (SNOWPIERCER) are Iron Man, Thor, and Captain America respectively, and they’ve become so adept at their roles that they all seem completely comfortable and at ease with their characters.  I was very impressed with the chemistry between Mark Ruffalo (FOXCATCHER) and Scarlett Johansson (LUCY) who play the Hulk and Black Widow. The characters are dancing an awkward courtship, and Ruffalo and Johansson land the steps perfectly, bringing real heart and tenderness to the film while they reveal a new depth and sincerity in their characters that has only been scratched at before now. Jeremy Renner (AMERICAN HUSTLE) returns to the role of Hawkeye, and we get to see a broader range from him this time. For the first time in the cinematic universe we get a glimpse into Hawkeye’s private life, this gives Renner far more to work with and he delivers a very heartfelt and human performance. There’s no one quite like James Spader (TV’s THE BLACKLIST) for pretentious villainy, so he was the perfect man to cast as Ultron. Spader is great as the genocide obsessed robot, he infuses him with the right amount of smug to make him amusing, but backs it up with a demented logic and cruelty that combines to create a truly entertaining antagonist. After merely being a voice for several films, Paul Bettany (TRANSCENDENCE) finally makes a physical appearance as Vision, the infinity gem wielding AI with the voice and some of the persona of Jarvis, Tony Stark‘s computer aide. Bettany has a talent for delivering powerful yet understated performances, which makes him perfect for Vision, as the character has a quiet, almost subdued nature. I found his portrayal to be captivating and can’t wait to see what they do with him in subsequent films. Aaron Taylor-Johnson (KICK-ASS 2) and Elizabeth Olsen (GODZILLA) play brother and sister Quicksilver and Scarlet Witch, and while I wish there had been more depth to their back story, they did a nice job with the roles. All we really learn about the history of the siblings, besides the fact that they’re enhanced, is how they came to hate Stark and the West, and everything is pretty much played out from there. Olsen and Taylor-Johnson do the best they can with what they have, giving us interesting characters that are fun to watch, but that are too underdeveloped to form a strong connection with.

AVENGERS: AGE OF ULTRON is a solid superhero movie, it has great action, shakes up the status quo, and has wonderful performances all around. If you have even a passing like of the Marvel films, than you should get out to a theatre and give it a watch, because things in the MCU are heating up, and you’ll be sorry if you miss this film on the big screen.