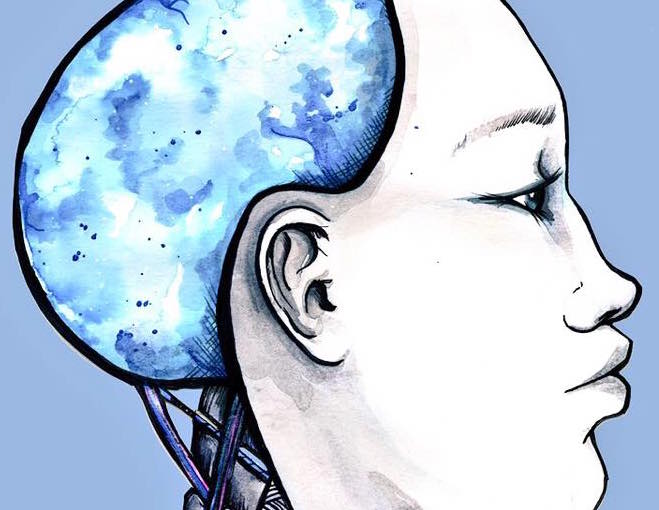 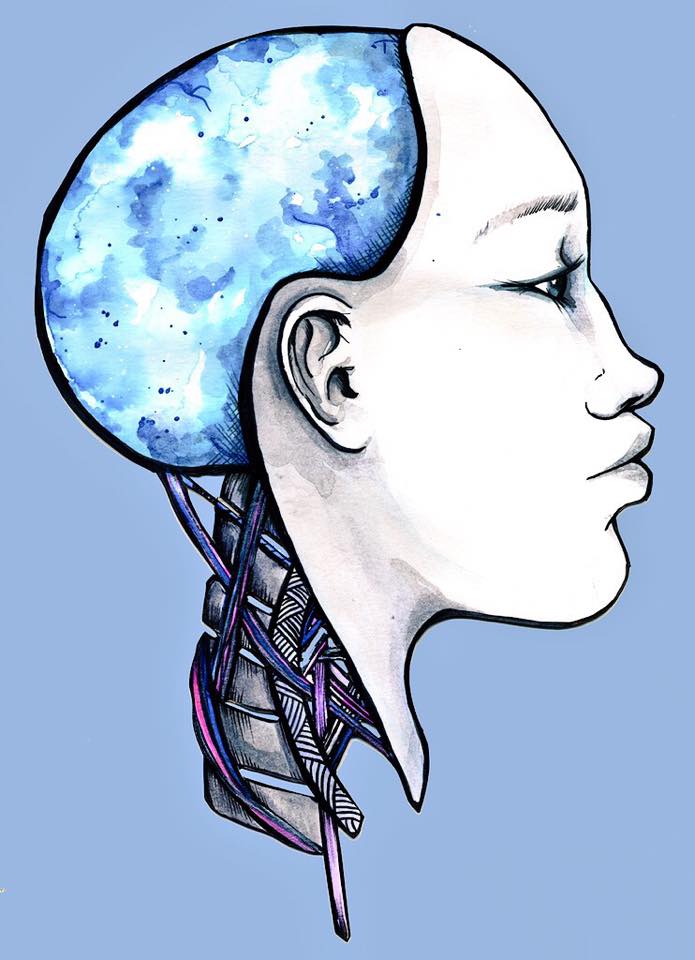 Screenwriter Alex Garland (DREDD) has finally made the move to the director’s chair with EX MACHINA, an intriguing film that examines the possibilities and perils of artificial intelligence.  The movie centers on Caleb, a young coder at the world’s most popular search engine, Bluebook.  He receives the opportunity of a lifetime when he wins a contest to spend a week with Nathan Bateman, the eccentric founder and CEO of the company.  Caleb is flown out to a remote compound in a secluded valley surrounded by high mountains, a place where visitors are certainly not normally encouraged.  After signing an extensive and invasive confidentiality agreement, Nathan informs Caleb that he has been flown out to administer a turing test on a humanoid android who answers to the name of Ava.  Caleb accepts the challenge and begins meeting with Ava one on one, and quickly becomes enamored with her.  As their sessions progress, Ava takes advantage of a power outage to warn Caleb that Nathan is not what he seems and should not be trusted.  As the week goes on and Caleb becomes better acquainted with both Nathan and Ava, he begins to question the project, Nathan’s motives, and his own humanity.

The production quality of EX MACHINA is remarkable.  The special effects are so well done that it is impossible to tell that what you’re watching isn’t real, which is highly impressive as Ava only sports a human face and hands with everything else being visibly mechanical.  While this may be Garland’s directorial debut, you’d have no idea from the camera work.  The film does a wonderful job of using two shots, close ups, and mostly tight angles to draw out the emotional tension of the film and to strategically manipulate the audience’s perception of the three main characters.

The premise for EX MACHINA is extremely compelling: what constitutes a person, how do we judge and critique such an acertation, and how do we know if our criteria is truly effective?  The movie does a nice job with this philosophical quandary to the point that it becomes slightly eerie at times as these mysterious waters are traversed.  However, while Ex Machina has a very intriguing story, I feel there are some major omissions and plot holes that prevent the movie from being all that it could have been.  As Caleb begins to plot against Nathan, he access the video archives that chronicle Nathan’s work, and while some of it is disturbing, it certainly illustrates that the androids he has created are at best unstable and at worst dangerous.  This revelation raises some very big questions: what happened to make Nathan comfortable enough with one of them to let her be his assistant and housekeeper, and what would possess him to think he could tackle one in a fight with merely a dumbbell bar, and why didn’t he have some sort of kill switch or other effective means of containment or deactivation in case of conflict?  Sadly, none of these questions get answered and I found myself scratching my head at the lack of explanation and the uncharacteristic actions forced upon Nathan and Caleb as the movie reaches its climax.  Another problem with the story was the attempt to vilify Nathan.  His actions may not have been altruistic, but they were no more evil than the base actions I see on a daily basis in society.  Unfortunately, the movie goes to great lengths to try and depict him as a monster, and it feels forced and insincere, to the point that it starts to distract from the story.

Despite some hiccups with the story, the acting in EX MACHINA was top notch.  Domhall Gleeson (UNBROKEN) takes on the role of Caleb, and he is perfect as the somewhat socially awkward programer.  Gleeson does an excellent job of portraying an average person in a situation that is a bit out of his depth, his actions don’t feel natural most of the time, his delivery is guarded and patchy, and he constantly seems on edge, all of which is very hard to delivery consistently but he makes it look easy and natural.  While I’ve seen several films featuring Oscar Isaac (DRIVE) I didn’t take serious note of him until INSIDE LLEWYN DAVIS, and after seeing the great job he did with the role of Nathan, I think he is someone whose career is destined for great heights.  Nathan is a man apart, a creative mind that has found success and so has the means and ability to let his creativity run wild, and so it does.  Isaac portrays this eccentric man not as a villain, although the film tries to force that upon him, but rather as someone who is so focused on his project that the moral issue doesn’t really come into play.  Isaac makes Nathan exactly what he needs to be, a little uneven, a little creepy, a little self destructive, and hugely creative.  Alicia Vikander (SEVENTH SON) tackles the role of Ava, the artificially intelligent android, and she is beyond impressive in the role.  Ava is in a unique situation of having consciousness but having had little human interaction as Nathan is the only person she’s ever encountered before Caleb arrives.  Vikander effortlessly embodies the role of someone who is new to everything, while simultaneously seems to harbor a deep ocean of thought and intent under their presumed innocence and naivety, she infuses Ava with this in such a subtle and natural way that it’s hard to believe she isn’t an actual AI.  If this is the kind of work we can expect to see from Vikander, than I am all for her taking center stage in future films.

EX MACHINA is an ambitious film, particularly for a directorial debut.  It’s a beautiful movie with skilled production and an outstanding cast, unfortunately the hiccups in the plot make it hard to take seriously when all is said and done.  If you want to see some great acting and a movie that is skillfully emotional and thought provoking, then head on out and give Ex Machina a watch, otherwise you may want to wait for it to hit your streaming service of choice.