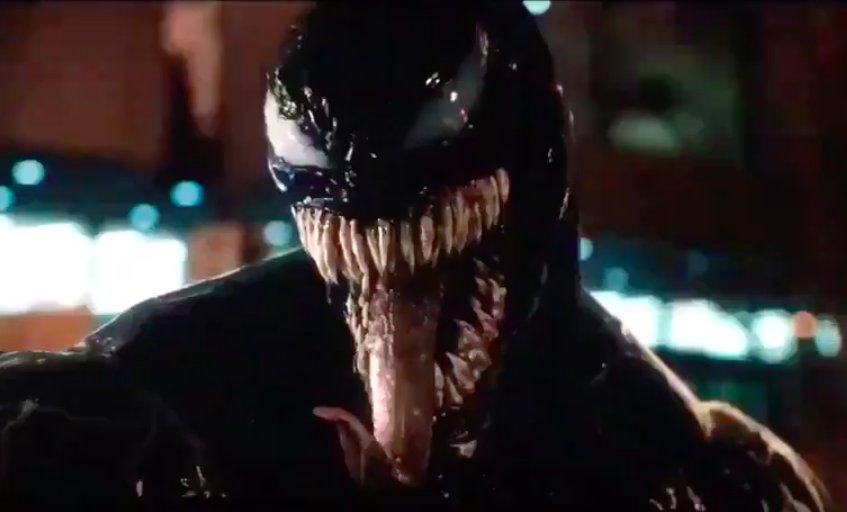 I was skeptical about the idea of a Spidey-less VENOM flick when it was first announced. I was slightly comforted by the notion of Tom Hardy (DUNKIRK) taking on the role of human host Eddie Brock, but still maintained a cautious anticipation. I became wary when given a teaser trailer with not a single symbiotic tendril in sight (even though principal photography had just wrapped and no CGI shots had yet been completed). Well, now I’ve been offered the first official look at the alien/human anti-hero in a new trailer. And while some caution and skepticism remain…I’ll admit, I am genuinely curious to see what VENOM has in store for us.

First of all, Tom Hardy just kinda rocks. I want to see how he handles the duality of fighting and accepting a killing machine hiding in his own body. Having acting dynamos Michelle Williams (ALL THE MONEY IN THE WORLD) and Riz Ahmed (THE NIGHT OF) mixed into the situation doesn’t hurt either. Rumors of a possible Carnage appearance sweeten the deal. And Venom looks pretty impressive so far: more menacing and visceral than scrawny-ass Topher Grace’s version from SPIDER-MAN 3.

As much as I think Sony is just falsely boasting about this movie being “adjunct” to SPIDER-MAN: HOMECOMING and the rest of the MCU, I’ll be genuinely surprised if they somehow pull off that vaguely loose connection. I dunno. Perhaps all will be revealed soon with INFINITY WAR. Maybe Thanos has a “symbiote chamber” stashed on one of those ships we see crashing down on Earth in the trailers.

In a world hellbent on “shared universe” franchises, it might seem odd having Venom’s solo debut have very little connection with the most recent cinematic webslinger, but who knows? The Netflix Marvel shows seem to do well without having to pay constant lip service to the MCU. Drastic changes to character origins aren’t outside the norm for Marvel movies (see the Mandarin and Ultron). If Hardy and company pull off an entertaining and engaging Venom story based on its own merits, then I’ll be happy enough. And there are rumors circulating that the next Tom Holland Spidey-film will have more adventures on a global scale. Could a visit to San Fran to duke it out with Hardy’s Lethal Protector be in the cards?