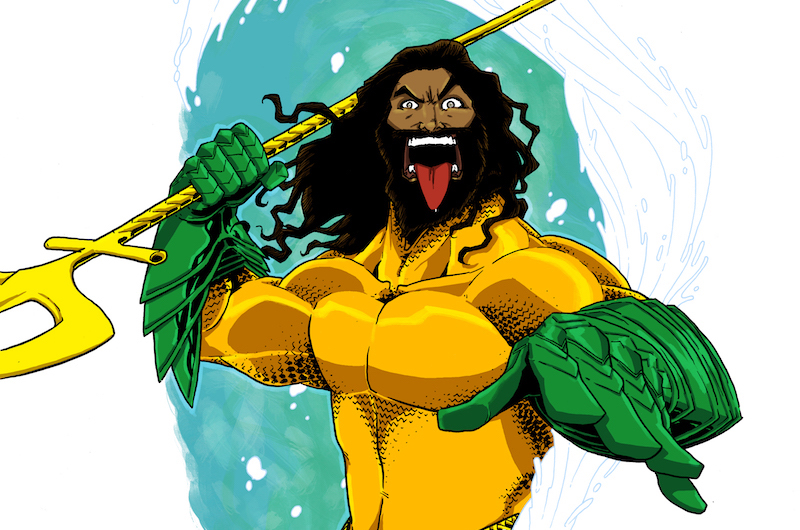 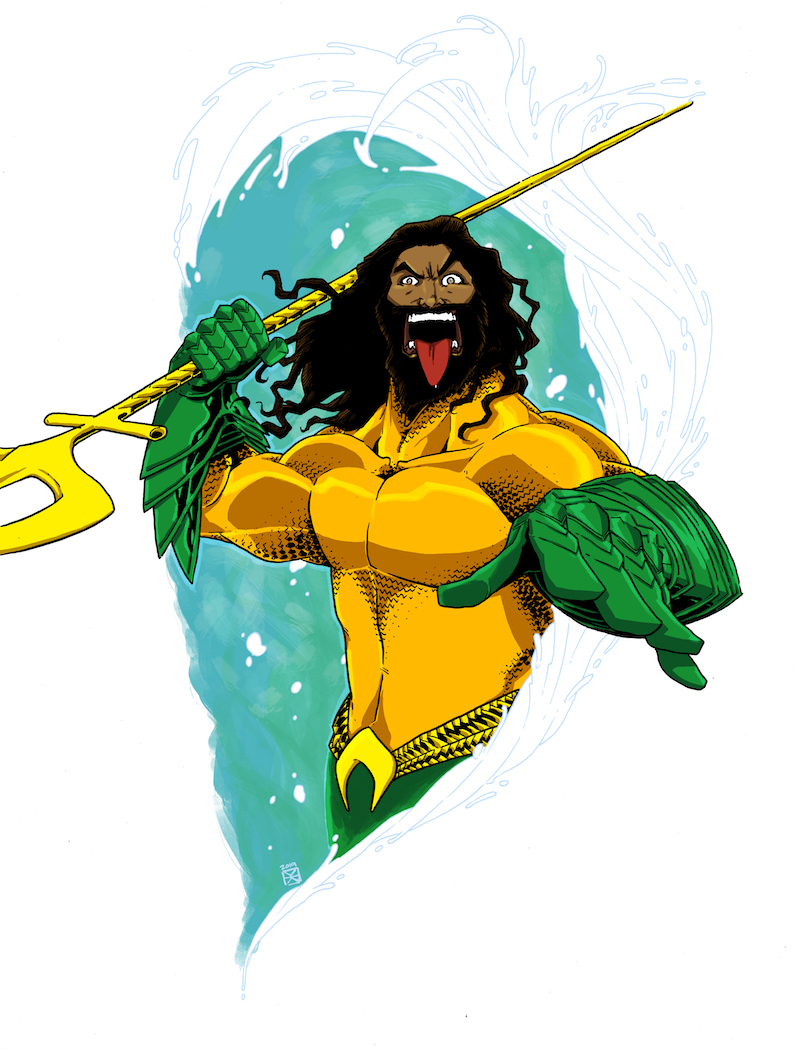 AQUAMAN is a DC live-action Saturday Morning cartoon movie starring Jason Momoa (GAME OF THRONES) as the titular Aquaman/Arthur Curry. His father is a land-dwelling light-housekeeper. His mother, an underwater Atlantean queen. Arthur grows up a child torn between two worlds. Aimless hero and reluctant king of Atlantis (I guess, also a member of the Justice League?). His half-brother Orm, THE OCEAN MASTER, wants to cleanse the surface world. Before he can destroy all who exist on dry land, Orm must first unite the ocean kingdoms. To stop him, Arthur must travel the world and find the trident of Atlan. With the assistance of Amber Heard as Princess Mera, daughter of King Nereus of Xebel and fiancee of Orm, Arthur must finally accept his throne and stop an underwater war that threatens to destroy all life on Earth. Sounds simple enough…

In case you’re wondering, yes. Jason Momoa does keep his chain wallet on throughout most of the movie. Does he keep it on while battling an ancient underwater leviathan that guards a magical trident? Heck yeah, he does. Ya never know when you’re going to need your Blimpie’s punch card. AQUAMAN has everything you would expect in this kind of movie. The hunt for a MacGuffin. The woman who guides our hero along on his journey, who is easily the most powerful person in the movie. The villain tricking his would-be allies into supporting his plan by staging an attack from their enemies. A forbidden love between a commoner and royalty. The dead parent, who ends up being alive and trapped in an inescapable prison dimension. Oceans of movies squeezed into a tiny lake.

I’ve seen this movie compared to BLACK PANTHER a lot. Which is fair because the plots contain a lot of similar elements. Two technologically advanced societies that exist in secret. ‘Villains’ that orchestra an attack that galvanizes their people towards an agenda. The hidden offspring of royalty claiming their right to the throne. One faction of the kingdom believing they should rule over the world, not hide within it. With legitimate reasons for wanting to overthrow the mainland. (We are poisoning the ocean!). Heroes who believe that both worlds can coexist if a peaceful understanding can be established. I mean… Dry Earth has beer. On paper, AQUAMAN has everything you could ever want in a comic book movie. Unlike BLACK PANTHER, it ends up feeling like something you only need to see once. This can’t be thrown entirely on the feet of director James Wan (INSIDIOUS, SAW) because he’s clearly doing his best to maintain the balance of so many elements.

It’s been over a week and I’m still struggling with this review… Give me a movie like VALERIAN AND THE CITY OF A THOUSAND PLANETS. Beautiful and imaginative. Difficult movie to enjoy. ID4: RESURGENCE. Beautiful visuals. Good chemistry. You expect little and leave pleasantly surprised. BATTLESHIP. What were they trying to do with this movie? KING ARTHUR: LEGEND OF THE SWORD: Buck wild visuals. Unique storytelling. I loved the shit out of it (My gauge is all over the place). I die on hills made of JOHN CARTERs, SPEED RACERs and TRON LEGACYs. We’re living in an age where AQUAMAN gets his own movie, full of massive underwater battles, and I’m confused about how I feel about it. It’s full of visuals that make you cheer and then confused about why you’re having such a good time. Jason Momoa keeps winking at the camera. Is he in on the joke? Am I? I’m having a good time, so maybe I should just turn my analytical brain off and have fun? What’s keeping me from doing so?

Maybe if this movie didn’t exist under the extreme weight of every bad decision DC has made with their movies? JUSTICE LEAGUE was meant to be the grand opus of the DCEU and I’ve fallen asleep every time I’ve tried to re-watch it. The weird thing is, I like JUSTICE LEAGUE. It’s not a game changer, by any stretch of the imagination, but it’s a fun experience. The problem is that it’s a movie full of their flagship heroes and you leave feeling like it was ‘just adequate.’ WONDER WOMAN is their only universally adored film. I cried throughout most of that movie. It was WONDERful. Even that movie was almost done in by DC clumsiness. Did it really need a massive CGI battle sequence at the end? WONDER WOMAN is the benchmark for DC films and I challenge you to tell me what happens in the last 30 minutes of it. BATMAN V SUPERMAN is way better than people give it credit for and it’s still an over-inflated train wreck. Ha! I just remembered that SUICIDE SQUAD exists.

When it comes down to it, I did enjoy this film. Some crab dude shows up in the last 30 minutes and ends up being my favorite part. “YOU’LL NEVER TAKE ME ALIVE, OCEAN MASTER!” You sort of lose track of everyone’s agenda, but, it’s fine. The de-aging effects in this movie are bad. Like… really bad. It’s like Marvel trademarked the best tech and now everyone else is trying to catch up. I didn’t think the CGI hair looked all that bad though. The Black Manta costume is out of this world! Speaking of Black Manta. I appreciate that they were able to squeeze him into this movie, but, every one of his scenes feels forced. I will say… Having watched Arthur step up in JUSTICE LEAGUE, helped me, I don’t know, wanna see where his story went? Jason Momoa is clearly having fun, which is more than I can say about Amber Heard. Did I mention that Dolph Lundgren is in this? Well. He is. Willem Dafoe is peak Willem Dafoe. When it comes down to it… It’s easy to shit on AQUAMAN and very difficult to defend it. But you end up wanting to do both.