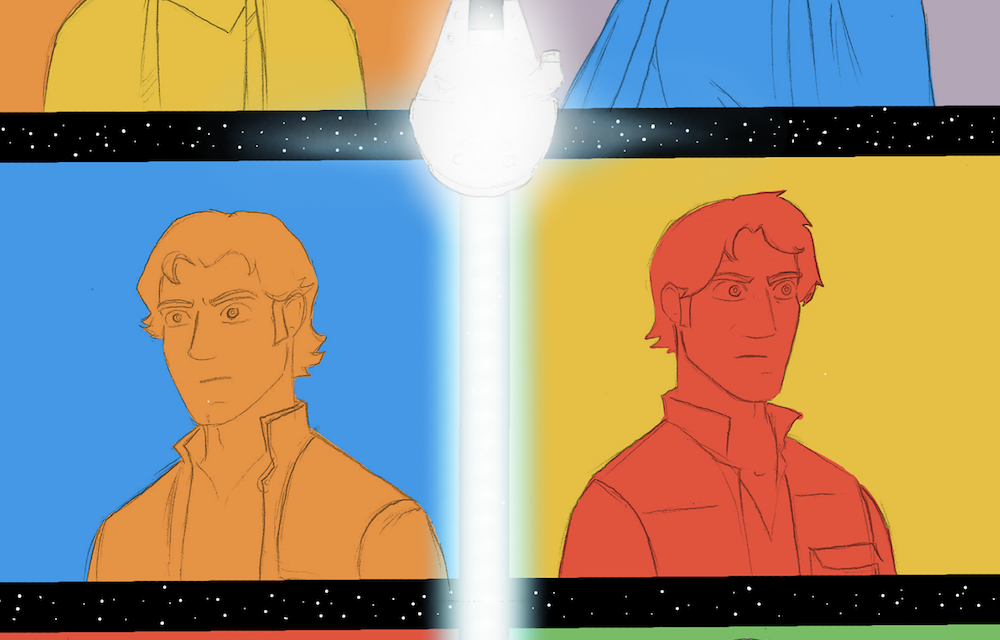 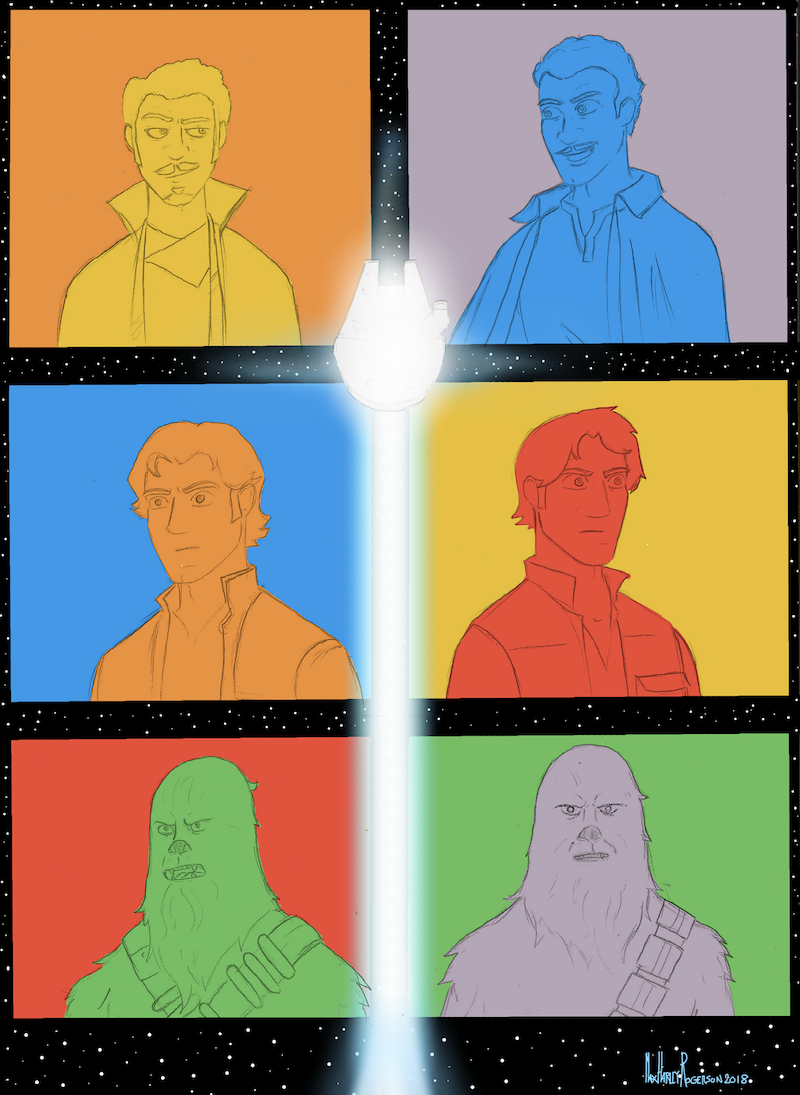 Fair warning ya scoundrels! Spoilers within!

What the hell is a Chewbacca?

Han Solo. What a buffoon. Can you believe this guy? Running around, dropping cargo loads all over the universe. Who does he think he is? I guess he was kind of smooth in EMPIRE. Flying his ship into the belly of a moon worm. Shooting laser beams into Darth Vader’s hand. Rescuing Luke from the frozen tundras. Carving up tauntauns like it was Thanksgiving day. There’s something to be said about a rogue. “I play by my own rules! Cash first! All I care about is me and my dog man.” A swashbuckling space pirate who only looks out for ‘numero uno.’ Watch him rogue his way right into your heart. The Millenium Falcon. How does Lando Calrissian know what a falcon is? The Millenium Mynock is more like it!

It’s SOLO, baby! Disney delivers on their promise to drop a new STAR WARS movie, on your chest, every year. This time we got ourselves an origin story to everyone’s favorite Harrison Ford. Han SOLO. Do you think this is their way of apologizing for killing him off in FORCE AWAKENS? Oh. Spoilers! “We killed off Space Indy but… here’s his origin story! You see, he’s still alive in your hearts.” We love him cause he’s got a ship in his heart and a twinkle in his ship. All he wants is to be the best space pilot in the whole dang galaxy. Wait. Isn’t that what Luke wanted? They’re both two sides of the same space coin! Two lower class white space brats with dreams of making it big in the space city. Han grew up as a criminal though. Take that, farm boy! Han’s even got himself a love interest in this one. A classic tale of “boy and girl screw off the wrong people so they can escape their life of space slavery and end up getting separated at the last minute.” I WILL FIND YOU! Out of desperation, Han joins the empire and is immediately kicked out of flight school. Then he’s on the front lines of a colonizing raid on some alien planet. Bummer. Luckily, he runs into a couple of thieves who decide to take a chance on this young vagabond. Not before he gets thrown into a mud cell and meets… You guessed it… CHEWBACCA.  He’s a proper badass in this one. He runs. He throws people around. Rips off arms. Gets mad at space chess. ‘Classic Chewie’. It’s like that scene when Han is all blinded from carbonite poisoning and Chewie is growling in the shadows.  Oh no.  What are you? A monster? “No! It’s me! Man dog! Woof.”

Now Han and Chewbacca are thieves.  They’re part of a crew and everything.  You got Woody from CHEERS, Maeve from WESTWORLD and a 4 armed monkey. They got themselves their first “one last score”. For some reason, the empire transports their MacGuffin space fuel on a train. Maybe it has something to do with its explosive tendencies? Who cares! #spacetrainheist. Choo!Choo! Everything is going according to plan, right up until the space pirates show up!  No. Another group of space pirates. Let’s run down the checklist: We got stormtroopers. We got bad guys. We got bad guys on flying motorcycles. We’re having fun!  Then. Maeve and the 4 armed alien get rubbed out. Oh. So. These stakes real? Then the cargo explodes into a mountainside. All that for nothing. Gulp. The only thing left to do is to plead with the head boss and pray he’ll give them a second chance. He does.  He likes their moxie. What’s this?  Love interest from the beginning is still alive and working for the head mobster? Whattt? I laughed at this part. All Han wanted was one big score so that he could go back to his homeworld and rescue young Sarah Connor from slavery. Nope. She’s right here. Cool. I guess we’re square? Nah. Lets steal some more space fuel! I know what you’re thinking, isn’t space fuel too well protected? Yes. How about in it’s raw form? Good thinking, Han! We’re going to need a fast ship tho. Hmmm. Lando!  You card cheating scum!  Give us your ship. Okie Dokie. Look at all these capes! That robot sure is sassy. The Kessel run in 12 parsecs, because of shortcuts (Retcon!) Woody runs a double cross. Han runs a triple cross. Lando runs away. Young Sarah Connor runs a sideways cross. Darth Maul is the real main bad guy?! Woof.

To me, SOLO feels like Disney’s attempt at expanding their universe (ala Marvel) but feels more like SUICIDE SQUAD and less like the ending of IRON MAN. The reveal of Darth Maul is meant to get us pumped for an Obi-Wan film but … like, did it though? The purpose of THE LAST JEDI dismantling the long-running theme that a STAR WARS story had to consist of a recognizable Master/Apprentice/Jedi/Sith/Skywalker character had more of an impact on me than this film did. The revelation that Rey was a nobody showed that STAR WARS can exist without all the names and faces we’ve come to expect. A mysterious boy with a broom can carry a franchise. The next generation of Jedi can be all about Bob and Sally. While ROGUE ONE successfully demonstrated that stories on the fringe of the STAR WARS timeline can still be great, it still depended heavily on Darth Vaders, Death Stars, and Princess Leias. SOLO is a SW story that barely references the main universe but is still a friggin Han Solo film. You can’t take a GUARDIANS OF THE GALAXY risk with your universe and then fill the lead roles with Peter Parkers.

Disney seems stuck between creating original characters in familiar situations and putting familiar characters in original situations. There are Storm Troopers in this movie but they are not the main adversary. There is an empire but Han is not up against them. Here’s some context: I loved the casino scene in THE LAST JEDI. I love what it showed. Their universe is vast and full of stories.  A small child born into slavery on some random casino planet has no idea what a hell a Jedi is. Or he does, thanks to Luke sacrificing himself on such a grand scale. I just liked seeing that all the shit we thought was important, is peanuts to the entire universe. There’s a whole universe full of nobodies ready to rise up who know nothing about Hoth. A status quo that doesn’t care if there’s an empire or a republic in control. Thousands of planets and not every story is going to end with a massive space battle. Sometimes, a villain is going to be vanquished in his office and their death will have no impact on anything outside those walls.

Is this a good movie? Sure. Who doesn’t love a good space heist? Did it need to be a Han Solo film? Nah. ROGUE ONE did it right. Nobodies doing something awesome. SOLO was an alright story built around awesome characters. I’m all backwards. Lets show you how Han and Chewie and Lando and the Millenium Falcon meet. We got the Kessel Run. We got Han learning that you always shoot first. “Chewbacca?  That’s too long.  I’ll need to think of a nickname for you.” Wonder what it will be! Let’s have our robot be a social justice robot? Was that meant to call out Disney’s lack of diversity or make fun of those who point it out? It did explain why the Millenium Falcon’s computer was so sassy? SOLO didn’t really show us anything we didn’t already know. Han’s a good guy who doesn’t care about the big fight, but, always ends up helping the good guys win the big fight. He has no arc. He doesn’t start off one way and then become something else. Donald Glover pulls off an excellent Billy Dee Williams. Which was both fun and disappointing. It’s like watching Tom Holland doing a Toby Macguire impression. That’s the rub with SOLO. Had all these actors been thrown together in a space heist film that was set in the STAR WARS universe, it would have been something epic. Pigeonholing them into these characters felt forced and took away from what this movie could have been. SOLO is the DIE HARD 3 of STAR WARS movies. Maybe, that’s the point? Give the people what they think they want and when they’re disappointed, give them what you want to give them. You want a young Han Solo film? Here you go!  Didn’t like it?  Well, maybe you’ll like this TV show that also takes place in the SWU.  Who even knows. Woof, indeed.