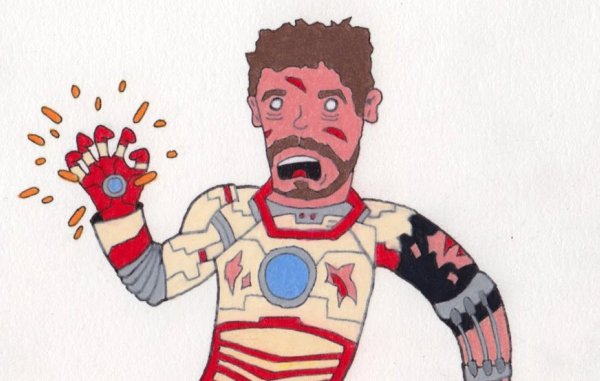 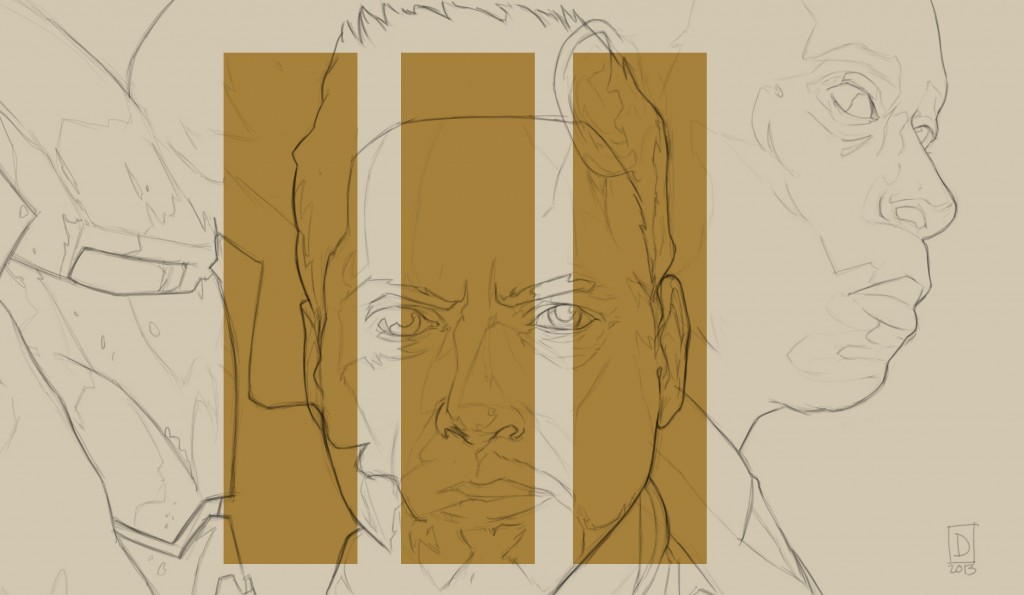 In IRON MAN 3 we get to see a different, yet well known, side to Tony Stark, namely the crazed, emotionally unstable side. Now typically, as far as the comics go, this side is usually brought out through his extreme alcoholism, however, this time it comes in the form of post traumatic stress disorder caused by the events in THE AVENGERS. While this may not be what fans of the movie franchise were expecting, it is the proper progression for the character and I think that long time fans of the comic franchise will be thrilled with it. Now please don’t think that what we now have is a bothersome emo version of Tony Stark, far from it. What we have is a narcissistic problem solving genius with a problem he can’t solve, so he throws himself into his work for lack of a better solution; that is, until he is forced to revenge himself on a baddie who hurts someone close to him. Now the villains come two fold with The Mandarin and Aldrich Killian stepping up to the plate to wreck havoc with Tony’s life. Now I won’t spoil the fun by telling you exactly who they are and what they want, but, like the previous IRON MAN movies, it does stem from personal grievances with Tony.

The story in IRON MAN 3 is impressive, but not in quite the way people would think. I know that people may be disappointed in seeing another plot line centered around someone being pissed at Tony, but what other motivation could there be? It is an IRON MAN movie after all. What is so impressive is that almost all of the trailer, particularly the parts of the trailer that pertain to plot development, are handled within the first 50 minutes of the film, that leaves nearly an hour and a half to go where you don’t know what is coming, which I always find far more fun. Even more delightful is the great slight of hand trick the movie pulls; at the start it appears to be just another plot line of a psycho pissed off at perceived abuses by America’s foreign policy, which at this point I am tired of seeing. Thankfully, this is used as a smoke screen for the real motives at play, but, again, you’ll have to go see the movie to find out what those are because I’m not going to spoil it for you. 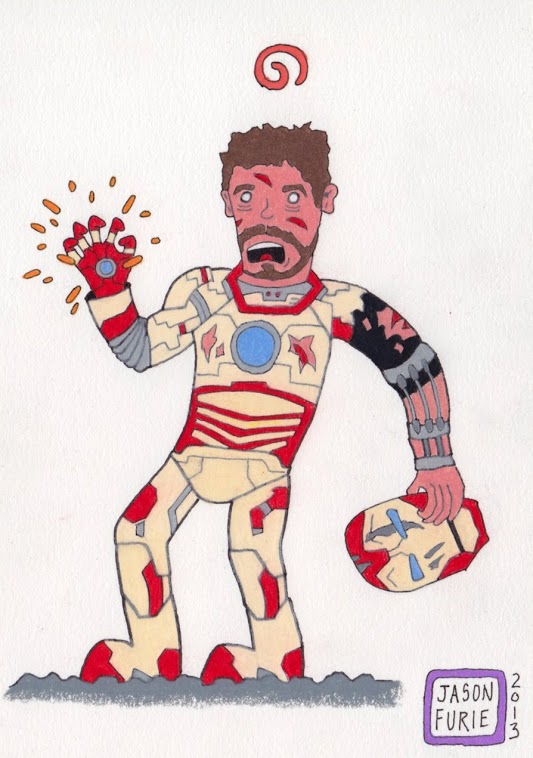 Directorial duties for IRON MAN 3 fell to Shane Black (KISS KISS BANG BANG) who also co-wrote the screenplay along with Drew Pearce (PACIFIC RIM). Now those familiar with Shane Black will know him as one of the premier writers for action films, but he has been on hiatus from the film industry for nearly 7 years, thankfully, he has returned and its with a bang, because he knocks it out of the park with IRON MAN 3. The movie has a fantastic look to it, staying crisp and clean even though there is clearly a great deal of CGI and special effects. Additionally, we get the kind masterful cinematography that is essential to comic book movies, because without the wide angle aerial shots and tightly done action sequences the movie just wouldn’t feel right. Anyone who has seen KISS KISS BANG BANG knows the kind of performance Black can get out of Robert Downey Jr. (SHERLOCK HOLMES: A GAME OF SHADOWS), and that ability shines through in IRON MAN 3 as Black extracts a far more diverse and deep version of Tony Stark out of Downey. Marvel made a great decision when picking Black to helm this movie, because he elevates it to the high level of quality we have come to expect from Marvel Studios.

IRON MAN 3 boasts an impressive cast with Robert Downey Jr. stepping back into the role of Tony Stark, and even though the character is far more complex this time around, Downey handles it like a master thespian and delivers a great performance. Gwyneth Paltrow (THANKS FOR SHARING) returns as Pepper Potts, and while she isn’t in the movie quite as much as I would like, she has a commanding presence every time she is on screen. Don Cheadle (FLIGHT) reprises his role as Colonel James Rhodes, and while he gives a decent performance, it just doesn’t quite live up to the high expectations I have for him after seeing his performances in CRASH and REIGN OVER ME. Jon Favreau (IDENTITY THIEF) once again plays Happy Hogan, and while his part is rather small this time around, he delivers a charmingly humorous performance. Guy Pearce (PROMETHEUS) steps into the role of Aldrich Killian, and he nails it. Pearce is excellent as the nerd turned reserved madman and delivers one of the most intense performances of the entire Iron Man franchise. Rebecca Hall (THE TOWN) plays Maya Hansen, a genetic biologist who starts to think her research is being used for nefarious purposes. She handles the role well and really embodies the character, unfortunately they don’t delve very deep with her and you are left wanting to know more about her and her past. James Badge Dale (THE GREY) plays Savin, a soldier turned lackey who handles most of the field work for the villains. Despite a decent chunk of screen time Dale doesn’t have a great deal of dialogue, but he plays a cold hearted bastard well enough that I would like to see him in more prominent roles in the future, which may happen sooner than I think depending on how big his role in WORLD WAR Z is. Lastly, but certainly not least, Ben Kingsley (HUGO) fills the role of The Mandarin. Initially, I was very skeptical about a prominent British actor being cast as a villain that is clearly supposed to come from Asia, but after seeing what Marvel did with the character I was absolutely delighted by their casting choice, and even more so since Kingsley gives us what is possibly the most memorable character in the movie. 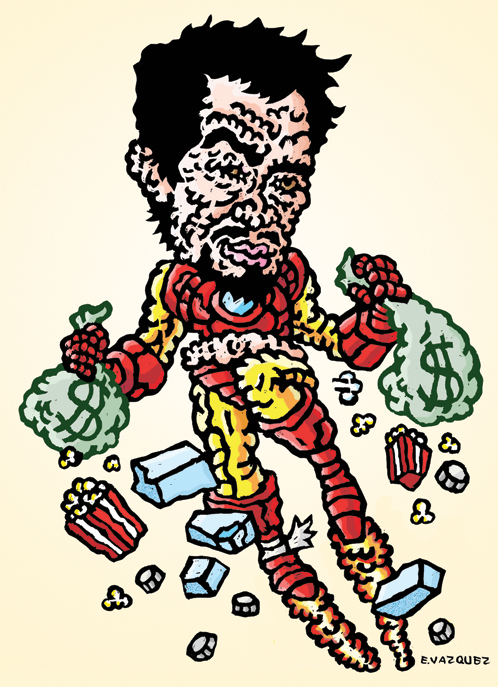 IRON MAN 3 is a great opener for the summer movie season. It has an intriguing story, intense action, impressive new characters, and great performances by some of Hollywood’s most well known actors. It also boasts the triumphant return of Shane Black to the action movie genre. If you have even the slightest interest in seeing this movie, please go check it out while it is in theatres, because it is well worth the price of admission.