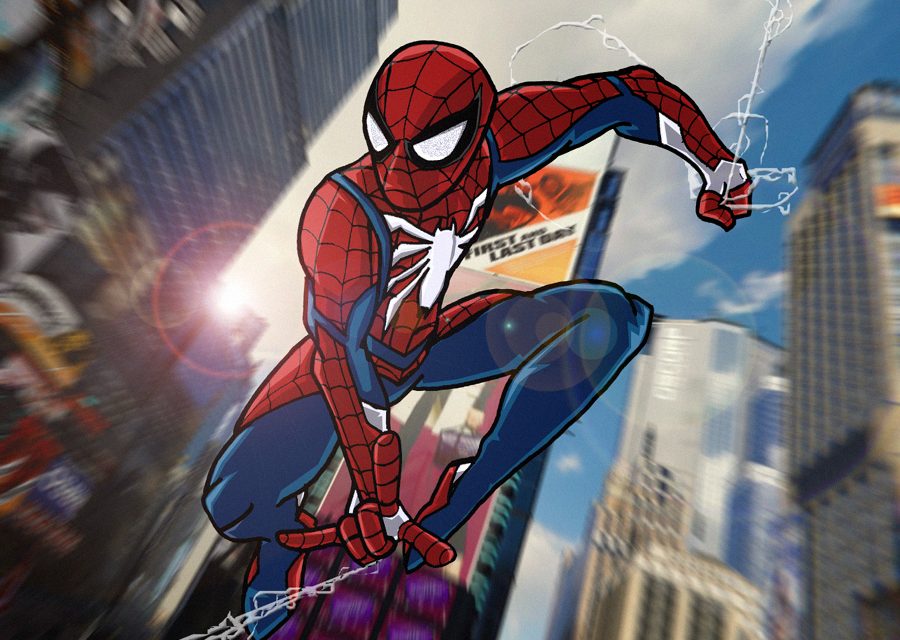 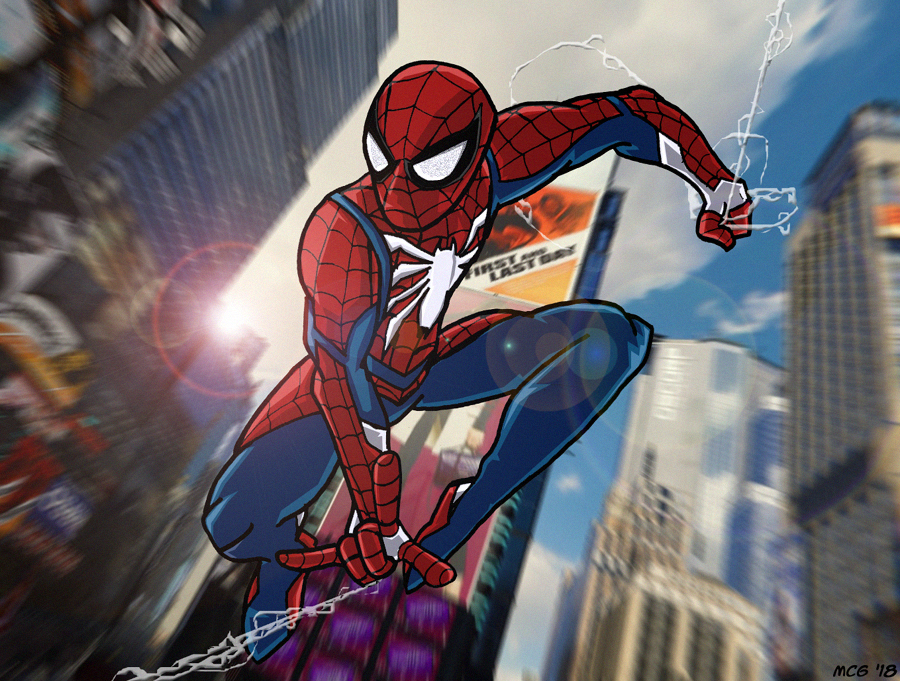 Here it is, folks: the game that finally convinced me to plunge head first into the world of PlayStation. I haven’t come up for air in about a week-and-a-half. I had so many plans pre-SPIDER-MAN, y’all have no idea! I was going to take up a new hobby (carpentry), maybe meet someone that shared that interest, fall in love, raise a mess of kids, and watch the sunset with them hand-in-hand from a porch of varnished mahogany that I had crafted decades earlier due to afore-mentioned hobby. Well, so much for that pipe dream ’cause now I gotta capture every one of those annoying-ass pigeons even if it kills me and get “Ultra” level scores on all of my Taskmaster missions ’cause I need more challenge tokens to unlock that awesome-looking Ghost Spider suit and why does it need six f#%king tokens to unlock anyways, you guys?!! 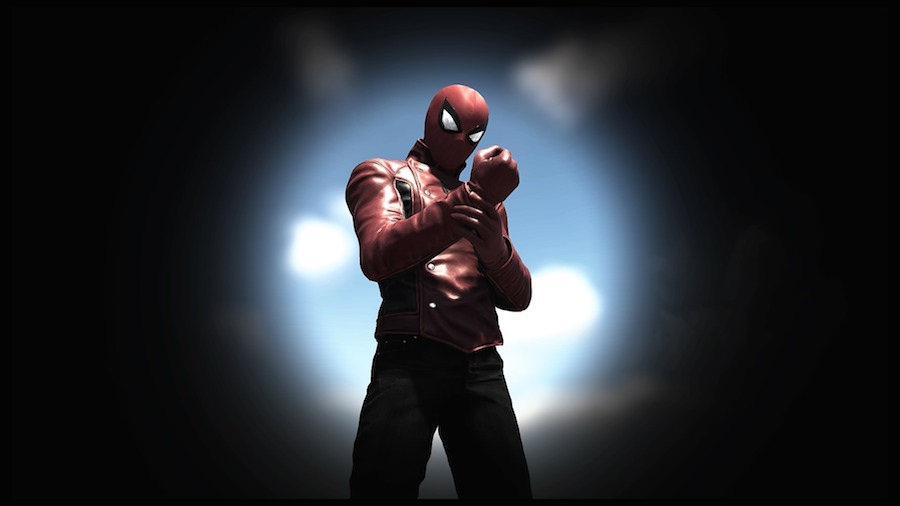 …sigh…let me back things up a bit.

Early on, I was very skeptical about Insomniac Games announcing a truly definitive and immersive Spider-Man experience. Previous companies had boasted similar claims with very mixed results. About the closest we’d ever gotten to actually being Spider-Man in a video game at that point in time was 2004’s movie tie-in SPIDER-MAN 2 from Activision and Treyarch (sort of a spiritual ancestor to this game). Open-world exploration. Varied traversal mechanics and combat skills. Side missions and content just as engaging/addictive as the main storyline. These were features that a good amount of other franchises took influence from (the ARKHAM and WITCHER series come to mind). And, ironically, they were features that game developers would lose sight of when it came to Spider-Man himself. Until now. 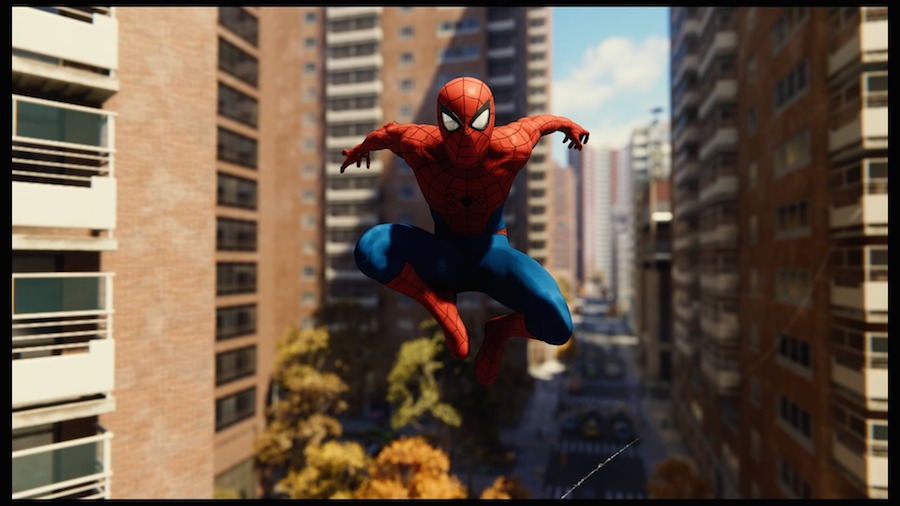 “He soars through the air with the greatest of ease…that daring young man in his webbed jameez!”- Spider-Man

For the time being, SPIDER-MAN on the PS4 is that definitive and immersive experience that was promised. Insomniac backed up their bluster with one of the most visually-stunning and enjoyable superhero video game experiences I have ever had. Much like the ARKHAM series, this game introduces you to a Spider-Man at the peak of his abilities. In this version, Peter Parker’s been doing the superhero thing for about eight years and the story opens with him finally taking down long-time rival Wilson Fisk a.k.a. the Kingpin. Fisk states that taking him off the board will actually make things worse and, sure enough, a new gang called the Demons emerges to fill the power vacuum and launch an all-out assault on the city and its mayor (and Oscorp CEO) Norman Osborn. As Spidey, you now must contend with the growing gang warfare along with a potential bioweapon being released on the population and familiar Spider-villains becoming more bold and making their own power plays for the city. But the greatest threat may be emerging a lot closer to home at Peter’s job as a research assistant for-ahhh, I’ve said too much! 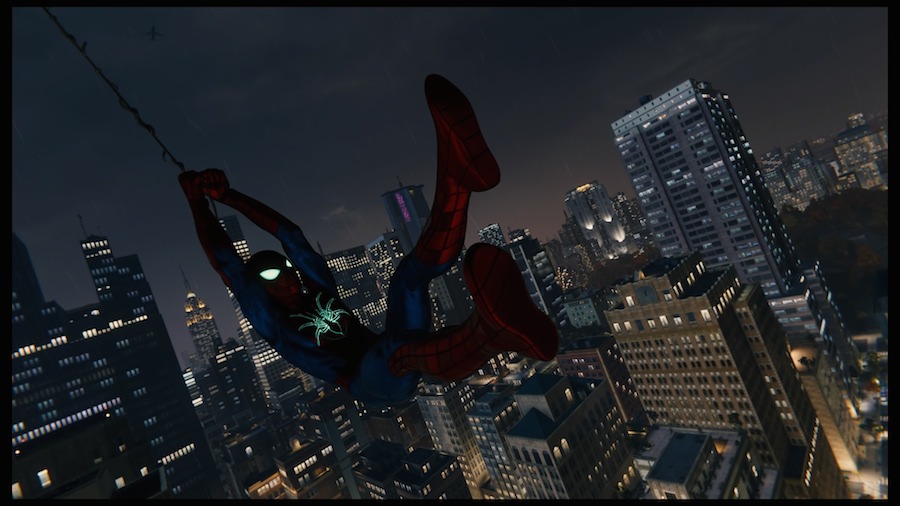 From a storytelling perspective, this is the most well-rounded version of Spidey we’ve had in a video game if not in non-comic Spider-Man media overall. This interpretation of Peter Parker endeared himself to me very quickly and it was refreshing to have a more mature character and storyline. This Peter has some mileage on him. He has a tenuous truce with the NYPD à la Batman and Commissioner Gordon’s dynamic. His Aunt May is no longer doting on him all the time and has become a prominent figurehead for an outreach center called F.E.A.S.T. headed by the seemingly-altruistic (yet enigmatic) Martin Li. He’s also slowly reconnecting with his ex, Daily Bugle photojournalist Mary Jane Watson, and takes on more of a mentor role to a certain troubled teenager named Miles Morales. Both of these characters are playable at certain points in the narrative with some engaging moments of stealth and coordinating with Spider-Man to help take down bad guys (though I hope the developers expand on the variety of these segments should they continue to use them in the inevitable sequel). All in all, characterization and story is strong in SPIDER-MAN. You really develop sympathy and understanding for all of these characters (heroes and villains) which compels you to further complete game objectives. I dare say this video game is the best Spider-Man movie since SPIDER-MAN 2. 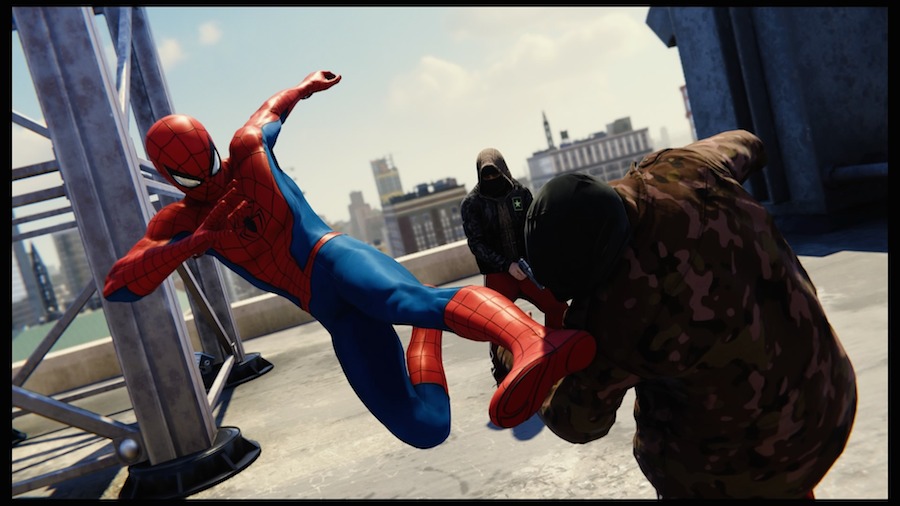 “Step right up! Don’t be shy, guys! My fists & feet are dying to meet you!”- Spider-Man

Obviously, the web-slinging traversal system and combat mechanics are what will make or break this experience for some. I can safely say that I’ve never had this much fun swinging from building to building or punching muggers in the face. The moves flow very well one into the other. You’ll upper cut a thug into the air to finish him off with a combo before your Spider-Sense tingles and you immediately dodge and web-zipline over to his buddy with the AK-47 and web him to the wall. Spider-Man in stealth mode is equally just as fun as certain situations will call upon you to plan attacks, take out threats from high above while avoiding detection, interact with objects in the environment to either distract or impede, and use gadgets such as web trip-mines or electrified webbing to sabotage large groups of enemies. There are occasional puzzle-solving segments that may feel somewhat excessive at times, but are still challenging enough to be enjoyable rather than frustrating. And, as I stated earlier, an overabundance of side missions and extras will keep you hooked well outside the main campaign. Collecting and customizing 27 different Spider-Suits (most of them with their own unique powers/abilities) will be a challenge you’re more than willing to meet as you complete races, combat/stealth trials, secret photography locations, and yes…pigeon-collecting. 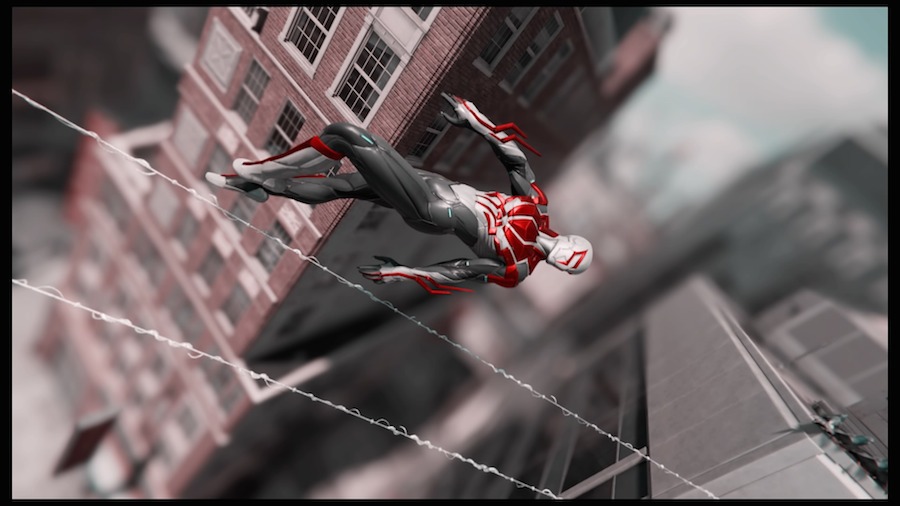 It also doesn’t hurt that this game looks gorgeous. Character models and expressions are rendered so well and so realistically that they almost make it out of the Uncanny Valley. Gameplay, Quicktime events, and cutscenes all have a consistent high-quality gloss to them, further reinforcing the cinematic aspect of the story. This game’s New York City is so alive and rich with detail that I wound up tabling the main story for a day to just swing through and explore the vast canyons of skyscrapers. I revisited the familiar archway in Washington Square Park that, in the real world, I spent a few years walking under while on my way to play gigs in Greenwich Village. I hung out in Times Square with all of its neon decadence and advertising. I took selfies with Harlem residents while on my way to the cemetery to pay my respects to Uncle Ben. Hell, I even visited the friggin’ Ghostbusters firehouse: 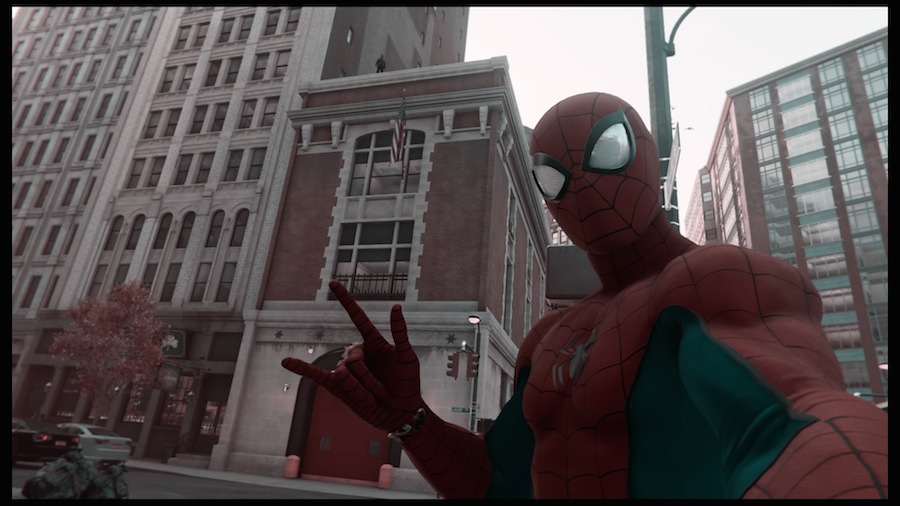 “‘Human sacrifice, dogs & cats living together…mass hyster-‘ wait! Is that dude about to jump off the roof? WTF, man?!”- Spider-Man

You may have noticed quite a few screenshots throughout this write-up. These aren’t cutscenes. They’re the fruits of my labors after completing 100% game objectives. Ladies and gentlemen, welcome to the inescapable rabbit hole that is SPIDER-MAN’s photo mode: 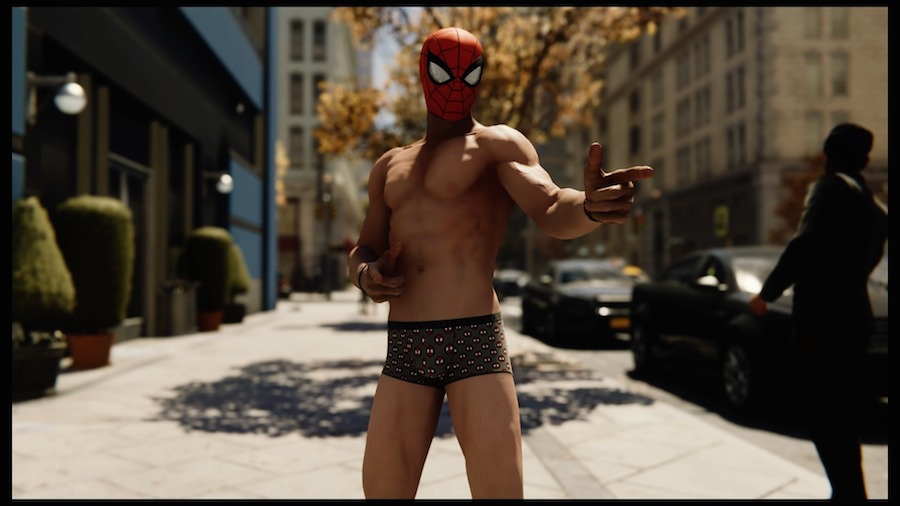 “Feast your eyes, folks! This’ll make you forget all about Toad being compared to Trump’s c@#%!”- Spider-Man

You can set up shots. You can use a variety of shade, color, and focus filters. You can create your own epic comic book covers. You can take selfies. God Almighty, I enjoy this feature so much that I’ve just now accepted that I will never get that carpentry interest off the ground. Sorry, custom bar stool with an oak finish. You’re never getting created! I’ve got pics to sell to the Bugle! 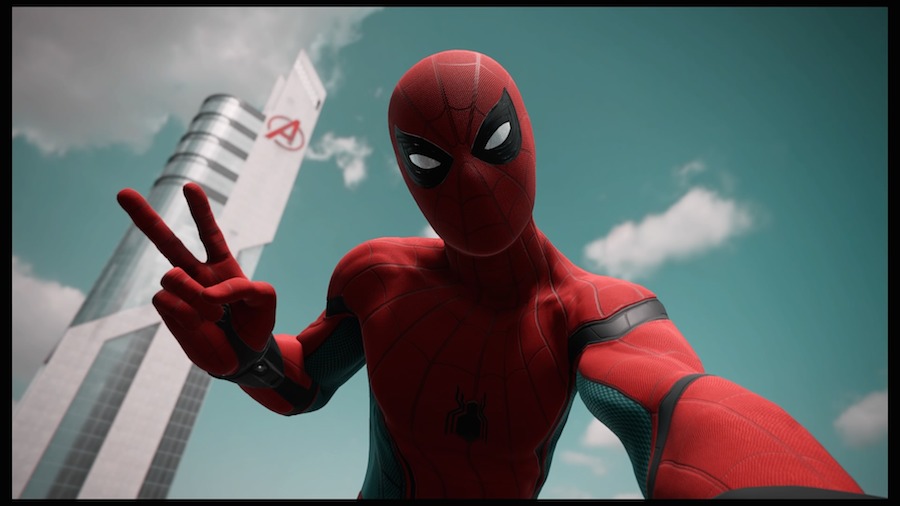 “Check out my impression of a self-involved millennial. LOL! Be sure to follow my IG and subscribe to my YT, Spider-Maners! WHAT ARE THOSE?!!!”- Spider-Man

SPIDER-MAN more than defied my expectations. It’s right up there with ARKHAM CITY, INJUSTICE 2, and ULTIMATE ALLIANCE as a superhero video game great. It was enough to open this Xbox One-hardened heart to a little PlayStation love. And it did it with panache. 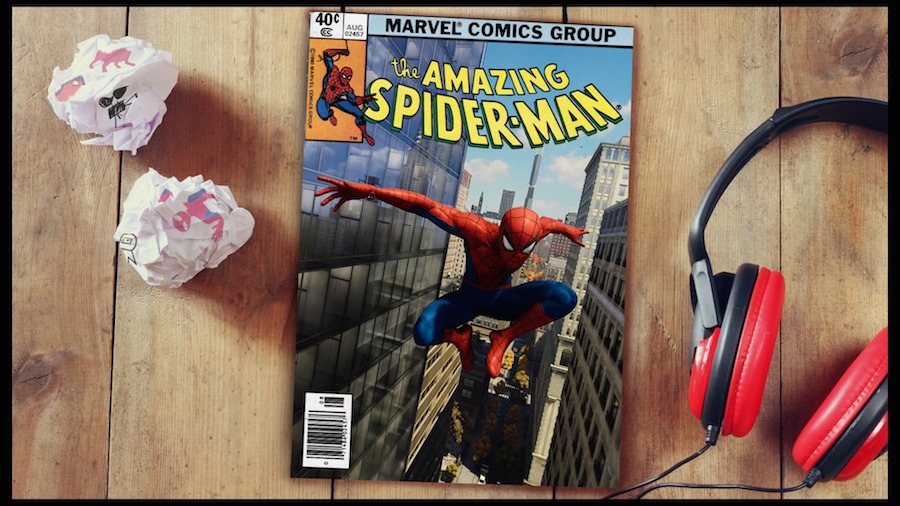 PS- I may do an update article on the DLC content once that’s released. Also, I highly encourage you to keep J. Jonah Jameson’s anti-Spidey podcast “Just the Facts” on while you play. It’s kinda the best thing ever…

…oh, and if you want to see some of my actual gameplay, check out my video review at McGTV: