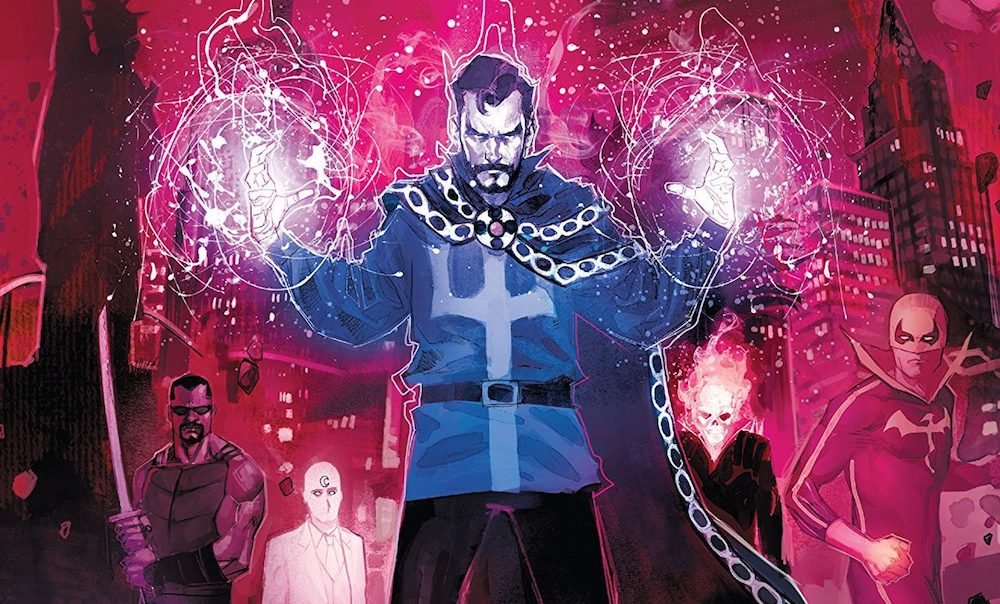 Like many of you, I was blown away by how rad Doctor Strange was in AVENGERS: INFINITY WAR. Dude stole the show. Ever since I saw him duke it out with Thanos on the big screen, I’ve been looking for more ways to spend quality time with the Sorcerer Supreme.

Enter comic books. Sure I played around with MARVEL VS. CAPCOM: INFINITE a little as good old D-Strange, but comics is where the gold lies my friends! If could only recommend one comic, it would be Jason Aaron’s ongoing run of DOCTOR STRANGE #1-20. But if you’re looking for something a little bit newer, and more consumable, I’d highly recommend the 4-part DAMNATION mini-series.

Fresh off the heels of Marvel’s SECRET EMPIRE event, the world is still reeling from the complete destruction of Las Vegas. In short, Strange thinks he has a solution, he raises hell itself by mistake, more devastation ensues. Sounds fun right!?

Besides the stellar artwork throughout from artist Rod Reis, what makes this arc fun is the cast of heroes including Strange himself, Wong, some cool ghost dog, Blade, Ghost Rider, Doctor Voodoo, Bloodstone, Man-Thing, Scarlet Spider, Mister Knight, Iron Fist, and many more! The pages are just packed to the brim with these heroes. Sure it’s a little watered down at times, but it’s a fun spectacle nonetheless.

The stakes are high in DAMNATION, the action is intense, and the events within will surely affect the Marvel Universe for years to come. There are a few big revelations I just can’t spoil!

Now that DAMNATION has concluded, I’ll have to figure out which comic will scratch my Doctor Strange itch in the coming months. That sounded better in my head.