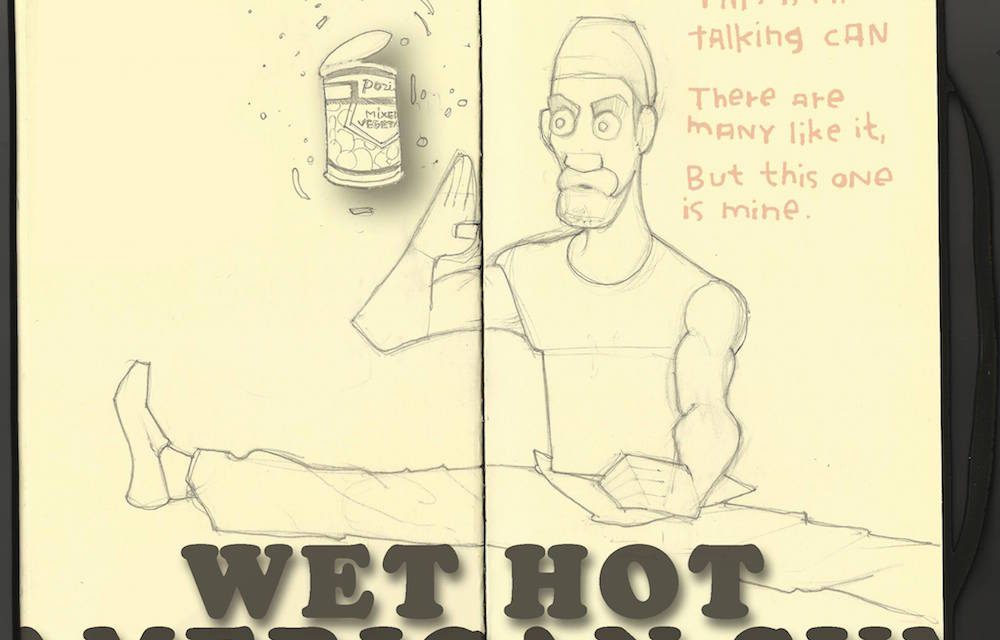 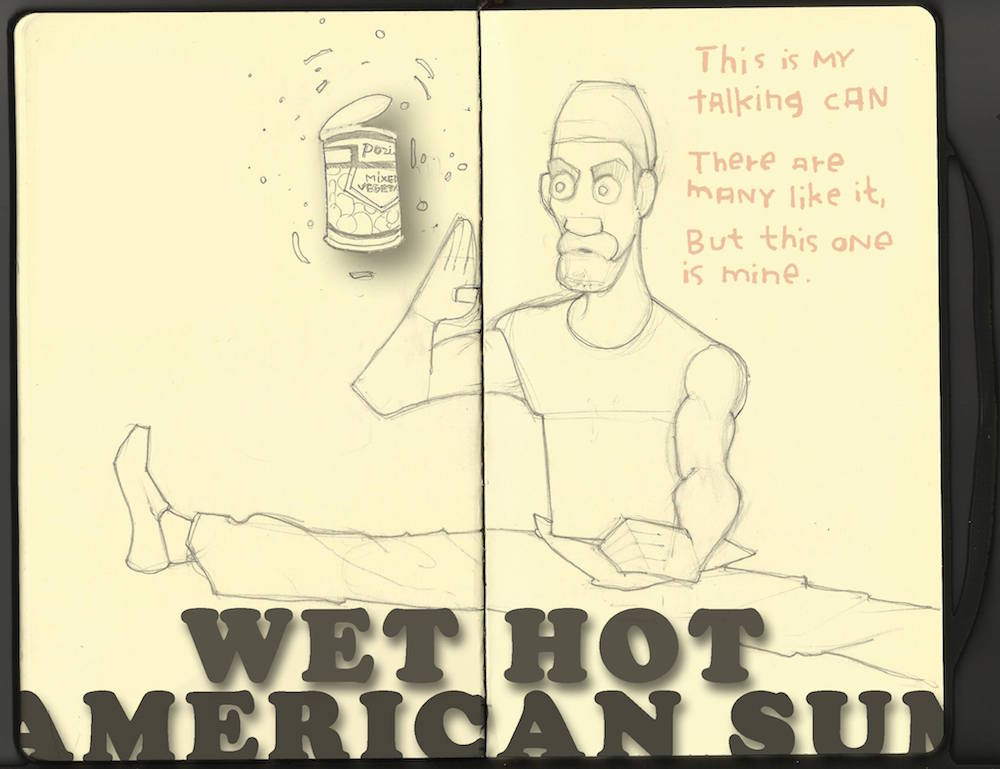 When it was first announced that they would be making a Netflix exclusive prequel series to the original WET HOT AMERICAN SUMMER, I think I was eating Japanese fried chicken at my work desk.  Let’s start from the beginning.  I was a huge fan of KIDS IN THE HALL.  I still don’t know how my 10 year old self, living in New Jersey, stumbled across the groundbreaking madness of that Canadian sketch comedy show.  Perhaps ‘space’ and ‘time’ are constructs we inflict upon ourselves to help us comprehend the overwhelming complexity of the universe? Maybe I had Comedy Central on in the background while I was playing with my G.I. Joes? I grew up aware of MONTY PYTHON, but, KIDS IN THE HALL shaped my comedy consciousness. It’s what prepared my teenage mind for THE STATE (I was not able to drink alcohol at this point). ‘Porcupine Race Track,’ ‘Louie and The Last Supper,”Doug’ and ‘The Barry Lutz Talk Show.’ It was complete lunacy and there was no recognizable method to the madness. It altered me. When I stumbled across the WET HOT AMERICAN SUMMER VHS and recognized many of the same faces from THE STATE, naturally I dropped a ‘fiver’ on the counter top and retreated back to my bedroom. I was able to drink at this point. I giggled late into the night.  I was giggling all over my house.  I giggled by myself and sometimes I giggled with friends.  WET HOT made me giggle uncontrollably and it raised a bar that has yet to come back down.  So, yes, my expectations were unrealistically high for the Netflix original prequel series. Is that okay with you, prick?

The original WET HOT movie is considered a classic because it masterfully mixed every summer camp cliche’ your brain could muster and then twisted it into an original beautiful balloon giraffe of nonsensical brilliance. Every joke was familiar; every punchline was completely unexpected.  Such as… Two friends discover that their friend is a homosexual and plot against him. Uh oh. They burst into the cafeteria and call their friend out in front of the whole camp. They end up celebrating his relationship with a wedding present from Crate and Barrel. So unexpected! The lives of the campers were expendable. There were little to no consequences. The hero of the movie gets the girl, after a perfectly executed movie montage, to only lose her again because she’s 17 and just wants to fuck the idiotic hot guy (Naturally). A trip into town results in the camp counselors spiraling out of control in a violent and drug infused frenzy, that ends up having no impact on the plot and occurs over the span of a single hour. Cans of vegetables can talk. 20 sided can alter the course of plummeting satellites. Their reality served at the pleasure of the joke.

Alright, I should probably start talking about the TV show and stop kissing my own ass for appreciating finely constructed comedy. The original WET HOT movie takes place on the last day of camp at Camp Firewood. The movie takes place on June 24th, 1981, but, was filmed in 2001.  The TV show takes place on August 18th, 1981, but was filmed in 2015?  You still with me? It’s the same summer, people!  David Wain and Michael Showalter were tasked with the writing responsibility of creating a series of scenarios that would bleed fluidly into their original movie.  That talking can of vegetables that guides Gene on his spiritual journey, well, he was actually the original camp director who fell into a pool of toxic waste!  Wait.  I don’t have time to spell out all the connections between the original movie and TV show in a natural way…

Aren’t you curious about how Henry (David Hyde Pierce) ended up staying at the cabin next to the camp?
Don’t you want to know how Katie (Margueriete Moreau) and Andy (Paul Rudd) ended up together?
Was Gene (Christopher Meloni) always Gene?
How did Ben (Bradley Cooper) and McKinley (Michael Ian Black) both discover they were ‘creative’ for each other?
Does Coop (Michael Showalter) have a history of falling hard and fast for the ladies?  ALSO, see what a summer of eating scraps did to his figure.
Watch Victor (Ken Marino) start his quest to finally lay some pipe.
I’ve wasted my life.
Jim Stansel! Alan Shemper!
How did Susie (Amy Poehler) become such a confident director?
Watch the love story that would eventually bring Gail (Molly Shannon) to Aaron.
Lake Bell! A.D. Miles! Jason Schwartzman! Chris Pine! Kristen Wiig! Jon Hamm!  That Guy! John Slattery! Jordan Peele! Names!

Okay.  My eyes are starting to burn.  Let me wrap this friggin thing up. Wain and Showalter had a lot of gall thinking they could get some of the biggest names in Hollywood to come back and reprise the characters they did in a small cult classic that premiered over 15 years ago.  I mean,  Amy Poehler, Paul Rudd, Bradley Cooper, Elizabeth Banks, and Christopher Meloni? Do I need to tell you how big those names are?  I mean, shit… Paul Rudd is ANT-MAN (Please read our ANT-MAN review here.  We need the traffic!) Well.  Looks like I’m the asshole because, everyone came back.  EVERYONE. David Wain, I want to dip my balls in your balls. The Netflix TV show is definitely worth your time.  The comedy stays true to the tone established in the original film.  It’s smart and it’s a hoot seeing everyone squeeze back into their summer shorts. Yes, the plot needed to be stretched out over a few episodes, which does slow down the comedy a bit.  It does succeed in making you want to re-watch the original film and call out sick from your monotonous existence.  I know you don’t need me trying to tell you how to live your life, but, you definitely need to watch them in this order… The original movie, the TV show, the documentary HURRICANE OF FUN:  THE MAKING OF WET HOT and then the original film again.  You’re guaranteed to find a hot mess of comedy in your pants!   Yes. Finally finished. Sweet release.

Final Score for Everything put together: 9 out of 10

Wait… There’s a documentary about the making of the original film available on Netflix?  Aren’t you going to even talk about it?

A Review of HURRICANE OF FUN:  THE MAKING OF WET HOT

In 2001, writers and founding members of the THE STATE, David Wain and Michael Showalter, went out and made a comedy that would be later referred to as a ‘cult classic.’  They assembled a motley crew of comedians and actors and stuck them all together on a camp for one month.  It rained almost every day of filming.  Everyone drank a lot.  They played a game called ‘Snaps.’ Despite the weather, morale was incredibly high on the set.  They drank.  It rained. A lot of the people in that movie would go on to have brilliant careers. They said they had over 20 hours of footage and the documentary is little over an hour long.  Bullshit. It’s a good thing to watch. Watch it.

Everything I talked about can be found on Netflix at the moment.