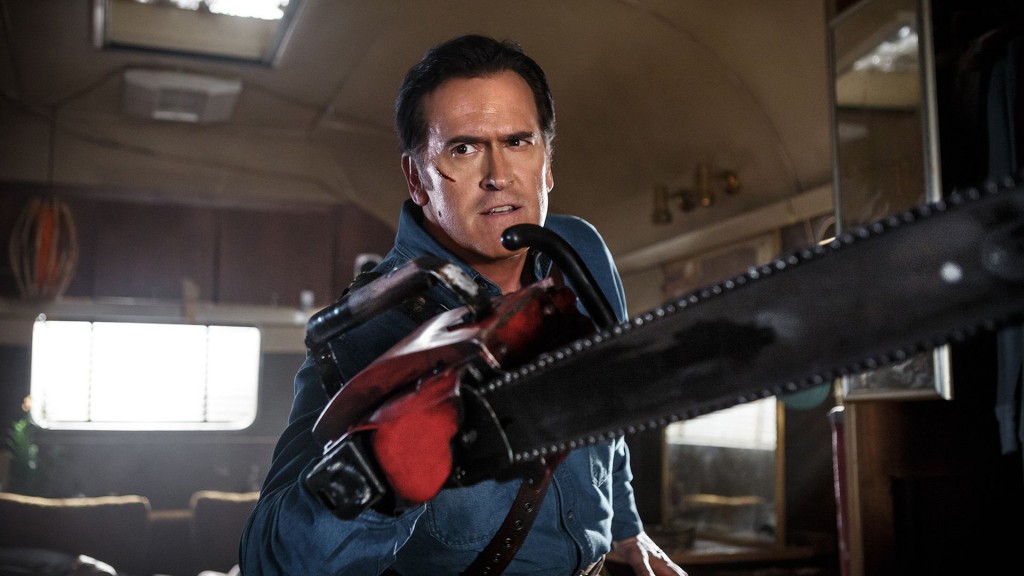 When an EVIL DEAD Remake was announced a few years back, fans lamented the fact that Bruce Campbell (TV’s BURN NOTICE) would not be reprising his role as Ash, thankfully, more than 20 years after the his last outing as the iconic zombie slayer, he returns to the role that made him famous with ASH VS EVIL DEAD.  The show is the latest in a slew of high end programing to debut on Starz in recent years, and it is sure to make long time fans smile as Ivan Raimi (DRAG ME TO HELL) and Sam Raimi (OZ THE GREAT AND POWERFUL) are both involved in the writing of the show.  The show opens with Ash getting ready to hit the bar in an effort to pick up a drunken floozy, and while he is successful, he has a vision in the middle of it of a deadite claiming they are coming for him.  After finishing his bathroom romp, Ash rushes home to figure out what is going on and soon flashes back that he read parts of the Necronomicon Ex-mortis in order to seduce a woman while they were both stoned.  In typical Ash fashion, he makes preparations to run but he unfortunately gets hung up at work by an uncompromising boss who won’t pay him until the end of the day.  Before the shift even ends a possessed doll attacks him, and while he was a bit unprepared he gets an assist from Pablo, a co-worker who idolizes him.  Meanwhile, the girl who was with Ash when he read the book turns up dead and possessed, which results in some very traumatic happenings for Amanda Fisher, a police officer who was investigating the disturbance with her partner.  With the deadites on the loose and multiple people in play, events spiral out of control and Ash will be forced to resume the mantel of warrior in order to survive the coming onslaught of his long time enemy, the evil dead.

The writing in the inaugural episode is just about perfect, and I am sure this has much to do with Ivan and Sam Raimi being the principal writers alongside Tom Spezialy.  One of the biggest highlights of the episode is characterization.  It has been a long time since we’ve seen Ash and we quickly get a feeling for what kind of person he is and how he has spent his years since we’ve last seen him.  Also, by the end of the episode there are three other prominent characters in play, Pablo, Kelly, and Amanda, and the if you paid attention you should have a strong impression of their personalities and motivations.  Beyond the characterization, the dialogue is wonderful as it’s full of the smart mouthed jabs that helped make the movies so much fun, but interlaced with enough sincerity and brutal honesty as to still tell a compelling story that, while humorous, isn’t just straight comedic.  Lastly, there was plenty of homage and references paid to the films which increased the fun and helped take you right back into Ash’s world.

Sam Raimi took on directorial duties for the episode, and he really delivers some top notch production values.  The camera work is all very reminiscent of the original Evil Dead films, however, Raimi clearly brings his more mature eye to this project and creates something that feels like the old films while still having much more impressive camera work.  I particularly loved the way they still used the first person perspective for the stalking force of evil and how they tinted that perspective to highlight supernatural quality of what was going on.  Raimi has always been a big believer in practical effects and that is very evident here.  Twisting heads, gaping wounds, and vivid stabbings are just some of the effects that are kept well clear of cgi, and while it makes the show a little less immersive, I wouldn’t have it any other way because the scale balances far more to the creepy than distracting side thanks to them keeping everything as tangible as possible.

The cast is headed up by Bruce Campbell as Ash, the only returning character from the films, and while it has been decades since he last played him, you wouldn’t know it.  Campbell easily brings Ash’s crass and cocky ass back to life, nailing one liners and reminding us just how fun a dirty scoundrel can be.   Jill Marie Jones (HEAR NO EVIL) takes on the role of Amanda Fisher, the steely law officer who is questioning reality after an encounter with a deadite that left her partner dead.  Jones is very solid in the role, infusing Amanda with a hard edge and determination that is sure to collide with Ash in the coming episodes.  Taking on the role of Pablo Simon Bolivar, the young coworker who looks up to Ash, is Ray Santiago (SEX ED).  Pablo seems somewhat impressionable and unassertive at first glance, but Ray does a nice job of tempering that with glimpses of courage and strength that have not yet been tapped into.  I have a feeling Ray may be the dark horse of the series, and I can’t wait to see what happens with him.  Dana DeLorenzo (THE MAD ONES) plays Kelly Maxwell, Pablo’s friend and new employee who will sooner throw a punch at someone than put up with their shit.  DeLorenzo is very fun as Kelly, giving her the right mix of attitude and heart to make her a scene stealer.  The show hints at a possible romantic angle in the future and while that may come to nothing, I’m sure whatever happens will be a wild ride.  Lastly, Lucy Lawless (TV’s AGENTS OF SHIELD) makes an appearance as Ruby, and while it was just a cameo in this episode, she is slated to be in the whole season, and I can’t wait to see what becomes of her.

ASH VS EVIL DEAD captures the spirit of the original films while upping its look to shine on modern premium television.  The story is great, the production is solid with plenty of homage to the originals, and the acting is everything you want from a comedic horror series.  If you have any love for the old Evil Dead films or merely want a fun show with plenty of laughs, then check out Starz’ new series, I think you’ll find it groovy.