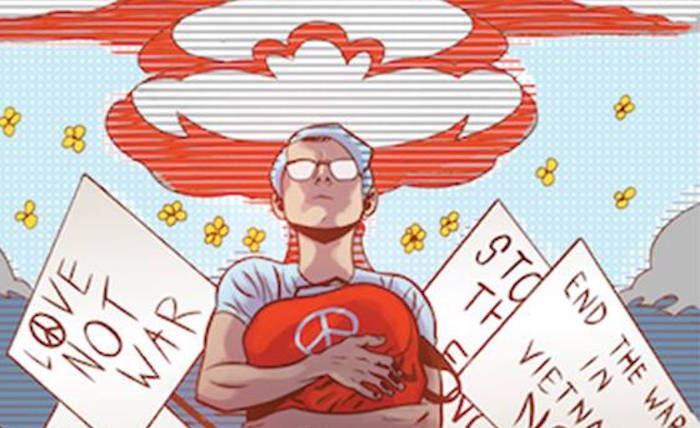 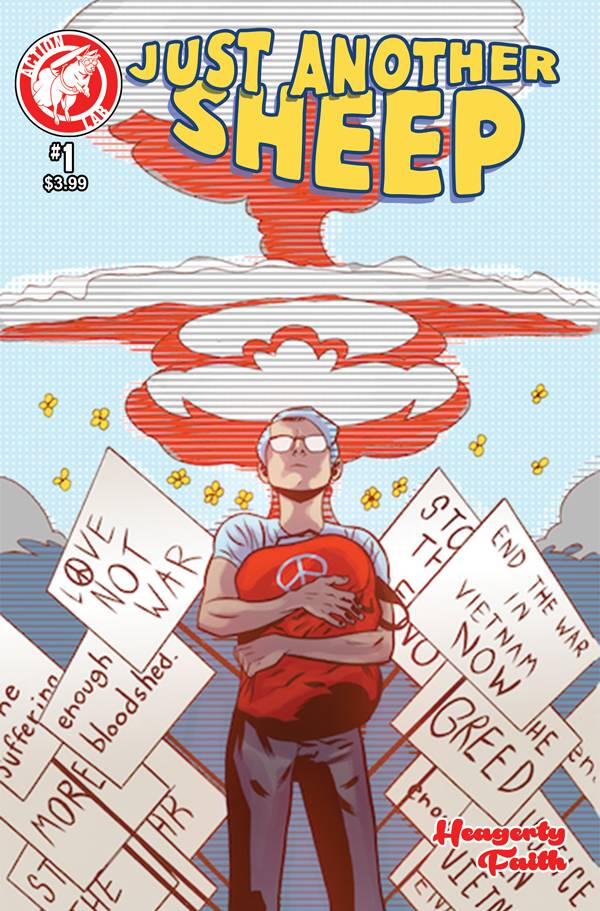 Whenever a group of nerds get together, the conversation has a tendency of gravitating towards the subject of ‘super powers’, which of course, results in everyone listing off their ideal super power. For instance, I would love to be able to teleport. I could vacation in Fiji every weekend (My winter tan would be wicked sick!). I mean… I would also use my powers for good… Totally. With ‘great power’ and all that jazz. I could teleport food and medicine all over the world. Rescue cats from trees (How great am I?). For the most part, these conversations tend to list off all the ‘greatest hits’ of super hero powers. ‘Flying’. ‘Being able to run at super sonic speeds’. ‘Being able to make hot dogs taste like caviar.’ ‘The ability to stop time’ (I would sleep in every day). Rarely do they mention how alienating having powers would make someone feel. How they would probably end up feeling more like a curse and less like a gift.  JUST ANOTHER SHEEP is one of those rare books that explores the isolation and anguish one must feel when they possess terrible and amazing powers. Powers that have the potential to change the world.

Washington, DC. July 3rd, 1967.
(That’s not when I wrote this article. That’s when the book takes place. I’m not a Nostradamus)

Chapter One:  Eve of Destruction.

Issue #1 of JUST ANOTHER SHEEP starts us off in familiar territory. We are introduced to Banning, a sort of ‘sheepish’ fella on his way to Boston to meet up with a doctor who claims to have proof that ‘superhuman’s exist.’ After a confrontation with a couple of goons, Banning displays the ability to make people experience any specific sensation he’s ever felt.  For instance, the worst food poisoning he’s ever had and a broken arm. With one look from Banning, his attacker’s bodies violently contort and begin to eject colorful fluids from every direction.  From there, Banning gets mixed up with a small group of ‘fun loving hippie revolutionaries.’ After a night of boozing, Banning and his new ‘fight the power’ buddies find themselves on the front lawn of the White House.  A small group of protesters have decided to jump the fence and are met with hostile resistance from the secret service. There, Banning is forced to use the powers he fears to save those who have given him a purpose. 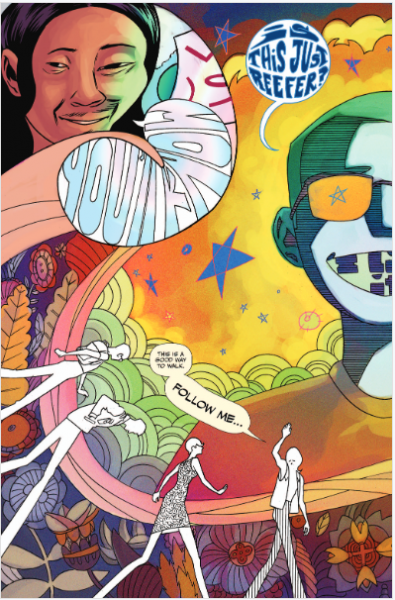 At first glance, one would mistakenly assume that JUST ANOTHER SHEEP is yet another story of a lone super powered individual in search of answers regarding his powers.  The very powers that have left him isolated and afraid of how he will be forced to use them.  It’s writer Mat Heagerty’s handling of the main character in comparison to it’s time period that pushes JUST ANOTHER SHEEP out from the pack. Set against the backdrop of the Vietnam War, the turmoil represented within Banning is directly paralleled to the world of 1967. In a time period where marginalized communities were desperate to share their perspective (from ‘gay rights’ to the’civil rights movement’), we are introduced to a character that can actually share his pain with those around him. The allegorical implications are endless. Banning is an individual so isolated and desperate for acceptance, that he would naturally align himself with the first movement that welcomed him into their ranks. He is a sheep in search of shepherding. 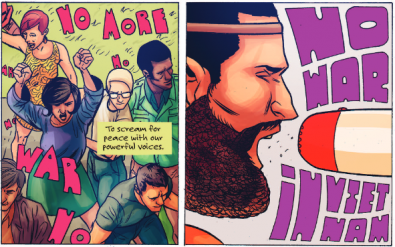 While the inaugural issue of JUST ANOTHER SHEEP establishes a premise that is ripe with potential and a world I am eager to explore, it’s the artistic powerhouses of JD Faith (Line Art) and Jon Cairns (Colorist/Design) that solidifies JUST ANOTHER SHEEP as NOT JUST ANOTHER COMIC BOOK. (See what I did there?)  Faith and Cairns’ page layouts result in your eyes hungrily devouring every inch of every page. (I love the beer bottles representing every beer Banning has plowed through) The layouts are original and unlike what you normally see in comics. Each page is exploding with an exquisite amount of detail.  (I discovered something new upon each new reading of the book) The colors so truly reflect the period, that you have to continually make sure that you’re not actually tripping in some field in the 60’s on your way to Woodstock. I have to also acknowledge the outstanding work of Ed Brisson on letters and Renee Keyes on Flatting. I’ve met Mat Heagerty. I know for a fact that he’s not in his 60s. Which is surprising because, where most writers would have created characters that were hyper exaggerations of 60’s stereotypes, Heagerty has created characters that are more relatable and realistic. The ‘peace loving vet’ is quick to violence and jealousy, but capable of acknowledging his own emotional shortcomings. Banning is determined to make his way to Boston, but is unable to resist the charms of a beautiful lady and the possibility to be part of a movement that could have lasting effects on the world around him.  He’s just a silly sheep, after all. The movement that wishes to challenge those mystery political figures who would control their lives is also having their lives controlled by their own mysterious figure. It’s deep.  All of it.

Overall, JUST ANOTHER SHEEP is one of those books that crosses your path and you immediately know is going to be taught in some classroom someday.  The art is beautiful.  The story is compelling. The characters will resonate with you.  Having had the opportunity to read ahead a little bit in the series, I can assure you that it goes in directions you could not predict. JUST ANOTHER SHEEP should definitely be on your weekly pull list. 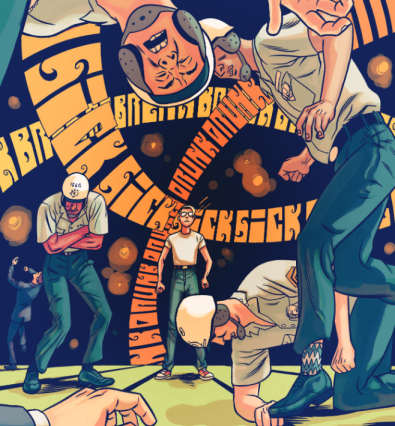 JUST ANOTHER SHEEP #1 is available in now!