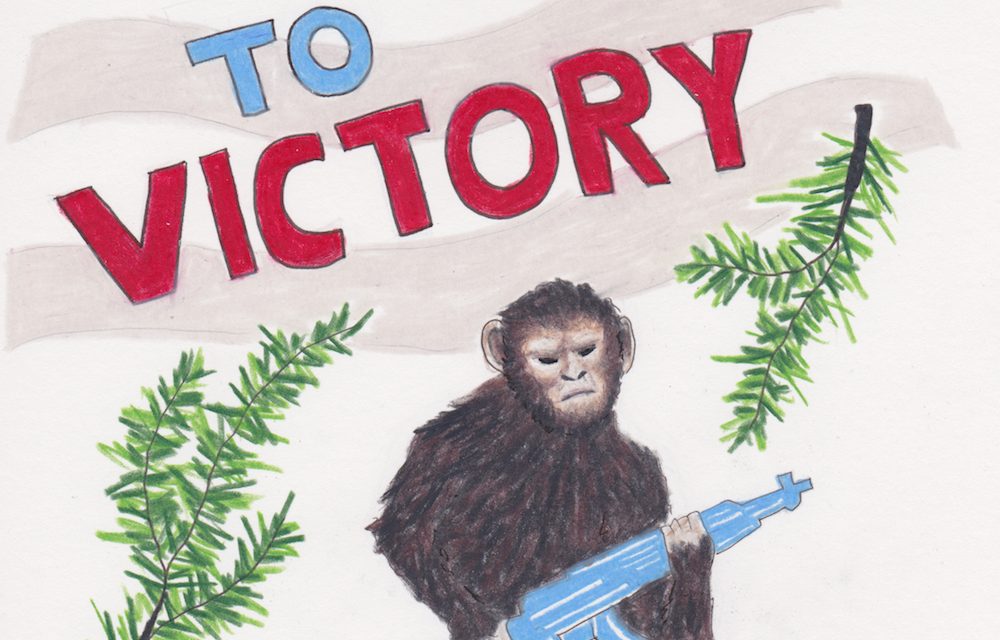 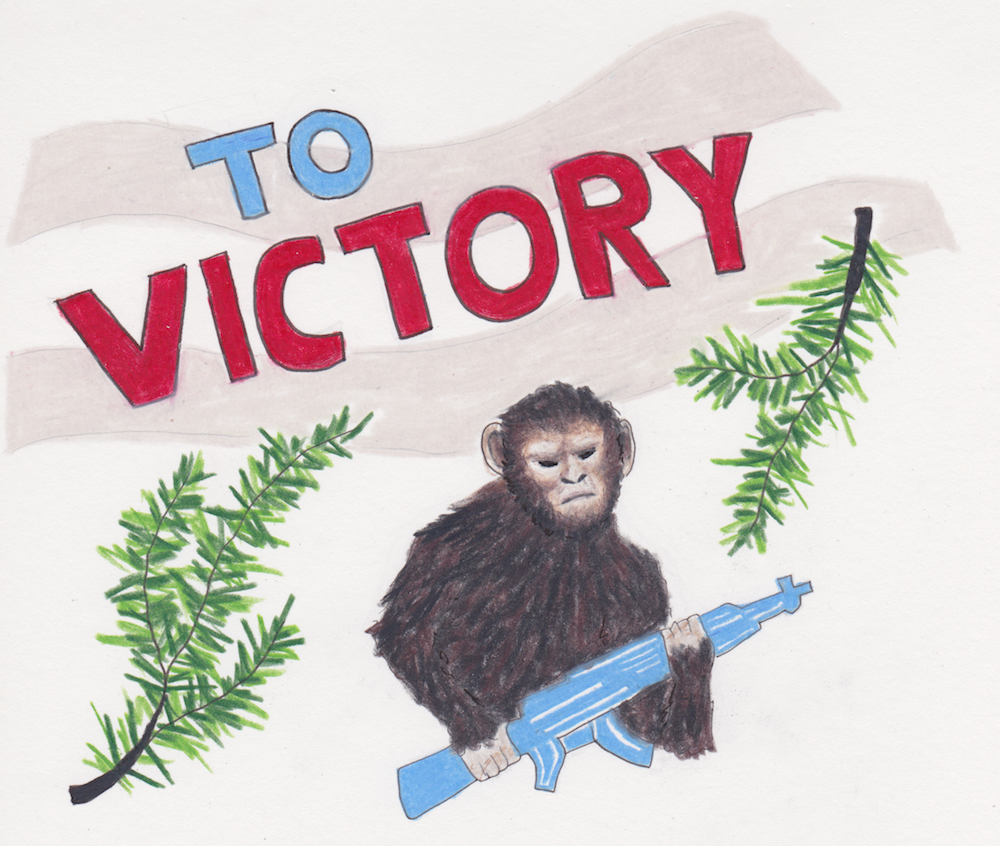 A lot of people say we don’t really have a generation-defining big budget movie trilogy at the moment. What about STAR WARS and THE AVENGERS movies you say? Well, they feel less special because we get at least one of each every year. They’re out of control! I’m talking about solid trilogies like the STAR WARS prequels, THE MATRIX trilogy, THE LORD OF THE RINGS trilogy, Nolan’s BATMAN, Raimi’s SPIDER-MAN and the like. I guess Abrams STAR TREK? Kinda, but there will be more. THE HOBBIT? Been there, done that. Hmmm. TRANSFORM…eeeer…nope way too many. X-MEN? No, way too disjointed like the current DC films. Ok, now I’m getting off topic. Wait! The new PLANET OF THE APES prequels! Yes! These films are amazing and I think it’s safe to say the story of Caesar (played by Andy Serkis) is among the best trilogies we have seen in a very long time. Problem is, not a ton of people seem to be talking about these gems. Well I’m talking about these gems, and I’m here to say WAR FOR THE PLANET OF THE APES is a beautiful film that brings to an end one hell of a trilogy.

Make no mistake, these new APES films define how realistic computer-generated characters can be. Never before have I been this emotionally connected to a CG character, not counting Jar Jar of course. Kidding aside, Caesar is an amazing and complex character who has had one hell of a life. We’ve been with this ape since his birth, have watched him grow and evolve, and have witnessed his epic and often tragic life story unfold before our eyes. Seeing him here in WAR as an older, war-worn ape with grey hair and all was a bit tough to handle proving just how much I care about him. It’s a testament to WETA Digital and their ability to seamlessly blend real life footage with digital. It’s simply unmatched.

RISE OF THE PLANET OF THE APES (2011) Movie Review

Can you guess what the central theme for a movie called WAR FOR THE PLANET OF THE APES is? You guessed it…war. The war between man and ape rages on from the second this film opens. Man and ape are relentlessly going at it completely decimating one another. Our hero Caesar leads the remaining apes while a newcomer simply referred to as The Colonel (Woody Harrelson) leads mankind in their struggle for survival. Between the apes fighting back and a deadly rapidly-spreading virus, mankind is nearing their end. This pushes the humans to do some desperate things and sink to new lows. They are a pretty frightening enemy doing some pretty gnarly things to the poor apes. Despicable as always humans…just despicable.

Make no mistake, this is a heavy film. “Bittersweet” is the nicest thing I can say about it. Thankfully there is a really great new ape named Bad Ape (voiced by Steve Zahn) who adds some humor and much needed levity in all the darkness. Bad Ape absolutely steals the show here and is one of my favorite apes in any of these films. Caesar’s buds Maurice (Karin Konoval), Rocket (Terry Notary), and Luca (Michael Adamthwaite) also return from previous films and all have important moments in WAR each getting a moment to shine.

DAWN OF THE PLANET OF THE APES (2014) Movie Review

From the opening scene all the way to the credits, WAR is captivating and moves at a quick pace never loosening its grip. The action is top-notch delivering some truly heart-pumping moments. And all the action is completely heightened due to the emotional investment I have with each and every character. While I can definitely enjoy and appreciate mindless action, the emotional weight here really created some truly nerve-wracking and stressful moments. Again, a testament to how much I cared. Always a good thing. To put it simply, WAR is a stunningly drab yet beautiful film.

RISE OF THE PLANET OF THE APES, DAWN OF THE PLANET OF THE APES, and WAR FOR THE PLANET OF THE APES is hands down the best big-budget trilogy from the past 10 years. The story of Caesar and his simian friends has been nothing but engrossing, mesmerizing, emotional, and action-packed. WAR is definitely a bittersweet film that beautifully brings to an end this trilogy. I suppose more films could come, and I hope they do, but as it stands, I think one could begin watching the originals at this point and it would be pretty seamless…well the story would be at least…definitely not the effects. WAR is not a feel good film, but rather a poetic and beautiful commentary on life and what it takes to survive when the odds are against you. This is the big-budget generation-defining trilogy you are looking for.