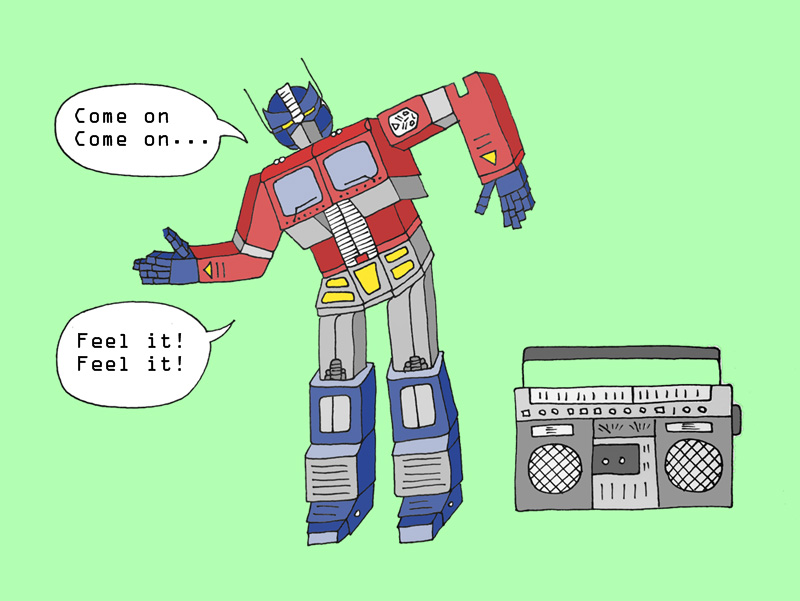 Ok ok I get it already. You don’t like Michael Bay TRANSFORMERS movies! Well guess what!? I think they’re pretty damn cool! They are bat shit crazy and there really isn’t anything else like them in theaters. Are they my favorite movies!? No, not by a long shot, but I can allow myself to give into the insanity and have some fun with them. It’s a multimillion dollar created robot alien wielding a sword riding the back of an ancient robot dinosaur who breaths fire whilst charging the puny-human infested streets of Chicago! If you can’t sit back, cram an ass mouth full of popcorn down your throat and enjoy THAT, then we just don’t have much in common my friend! “CITZEN KANE this is not” so would say my little green friend on Dagobah.

So like it or not, director Michael Bay is at is again with this fourth installment in the franchise called TRANSFORMERS: AGE OF EXTINCTION. Also worth noting is that while it’s a sequel to 2011’s TRANSFORMERS: DARK OF THE MOON, it’s a series reboot of sorts featuring and entirely new cast of human characters to fill the time in between robot action. That means all you Shia LaBeef haters out there can breath a collective sigh of relief. It has been 5 years since the devastating battle in Chicago, and all the Autobots have been told by their leader Optimus Prime to go into hiding and avoid humans at all costs. It is dark times for our robo-friends, and leads us in an interesting new direction for the franchise.

The most notable difference here is the new lead in the form of Mark Wahlberg (PAIN & GAIN) as a robo-mechanic/inventor named Cade Yeager who is accompanied by his daughter Tessa (Nicola Peltz; BATES MOTEL), her boyfriend Shane (Jack Reynor; DELIVERY MAN), and the family friend Lucas (T.J. Miller; SILICON VALLEY). Overall I’d say this new lead crew is quite bearable and leaps and bounds more acceptable than the casts of previous films. To say they were more grounded would be misleading, but they are entertaining and take a back seat to the robots as they should. The film’s human villains mainly consist of the corrupt government official Harold Attinger played by Kelsey Grammer (TV’s FRAISER) and the hired gunman James Savoy played by Titus Welliver (LOST) who both put on their “I’m the bad guy” shoes pretty well. And the show-stealer (if there is one), would be Stanely Tucci as the potentially corrupt multimillionaire inventor Joshua Joyce. It took about 2 hours, but one of Tucci’s lines actually made me laugh out loud when he desperately yelped “Just run them over” when the gang was driving through a crowed street full of pedestrians. I was embarrassed to laugh, but I did. All in all, everyone was likable enough and provided some decent entertainment.

The real stars of this show are the robots and we got a pretty interesting and different mix this time around. Of course we have Optimus Prime leading the Autobots again although he is in a much darker place this time around and really is fed up with all the selfish and ungrateful humans. Optimus is not afraid to beat the tar out of humans this time around, and is actually quite vulnerable and hesitant to lead. It was a nice fresh take on the character that gave him some welcomed rough edges. Other Autobots joining the battle include the fan-favorite Bumblebee, a hulking beast of a robot named Hound expertly voiced by John Goodman (THE BIG LEBOWSKI), a paratrooper bot named Crosshairs, an ancient samurai looking robot called Drift (a former Decepticon!), the medical officer Ratchet, the armored Leadfoot, and the little annoying dude from DARK OF THE MOON called Brains. While it wasn’t the most classic team we have seen, it was different and added some much needed variety to the franchise.

And since the bulk of the Decepticons are no longer alive, we had a pretty interesting lineup of evildoers. The intergalactic mercenary Lockdown takes center stage and is almost as menacing as Megatron. Galvatron is almost just as bad ass here as well. He was one of many human-created robots used from what was left from Megatron’s destroyed body. Other human-made baddies came in the form of Stinger, Jumkheap, and Traxes all of whom have these weird morphing powers that allow them to change shape on the fly instead of just changing from vehicle to humanoid robot. And yes, the dinobots do show up and we get to see the T-Rex Grimlock, the two-headed and two-tailed flying beast Stafe, Scorn the Spinosaurus, and Slug the Triceratops. While they are not in the film as much as I would have liked, their presence really sets this film apart from the others. Dinobots!!

Which leads me to why I bought a damn ticket in the first place; The action of course! The action in TRANSFORMERS: AGE OF EXTINCTION definitely does not disappoint and there is plenty of it. Optimus, Bumblebee, and the gang all have their moments to shine and there were definitely a handful of “wow” moments to be had. And that says a lot considering this is the fourth film in the series by the same director. Guns are blazing spewing out hundreds of thousands of bullets, rockets soar and explode with satisfaction, the melee weapons are devastating, and the aircrafts do all sorts of deathly destruction! A small complaint I have however is that there was a small chunk of time where the Transformers are all fighting in Chicago once again that felt a lot like DARK OF THE MOON. I had a strong “been here, done that” sense a couple of times. That is, until the Dinobots came roaring into the movie. While their time here is brief, it is absolutely moth-ball nuts (I don’t even know what that means) and definitely something to see on the big screen. Seeing Optimus wield that sword atop a robot T-Rex was just amazing fun. So cool. The Chicago battle was so crazy since there was a robo-war going on, the humans were joining in the action, and there was an aircraft sucking up all the metal (cars, boats, buildings, etc.) and spewing it back out all over the battlefield. It was insane. So yeah, I really can’t complain much about the spectacle of it all because it delivered in all its glorious insanity.

Of course the 12-year old boy inside me had a blast with TRANSFORMERS: AGE OF EXTINCTION. It was not a masterpiece by any stretch of the imagination, but it was damn good mindless fun. It’s not for everyone. My main complaints were that parts definitely felt way too familiar in the Chicago battle, and that run time of almost 3 hours is just way to long for a movie like this. Man, if these movies were an hour and a half each or even just a solid 2 hours, I would have so much more fun with them. And it’s totally doable since I caught myself asking “why is this important!?” a couple of times throughout this film. But alas, I had a lot of fun with this movie. The human characters are a lot more tolerable, the Transformers look great and are really cool, and the action is like nothing you have seen besides in a previous TRANSFORMERS movie. I imagine most people will not like this movie or have already decided they don’t like it before watching it and that’s a shame because there is a lot of fun to be had. Keep your expectations in check, grab some crappy food, and roll on out to the theater to catch this spectacle on the big screen. It’s gloriously insane!