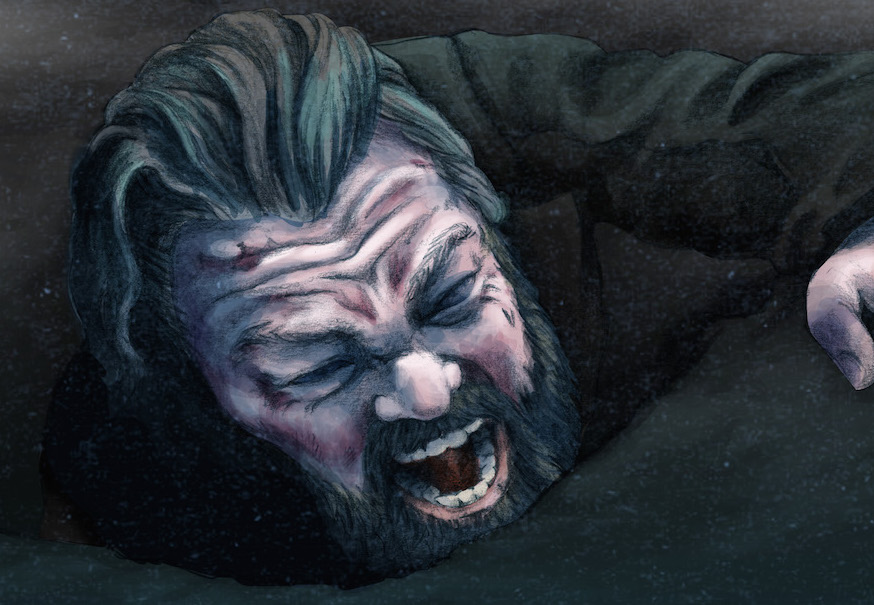 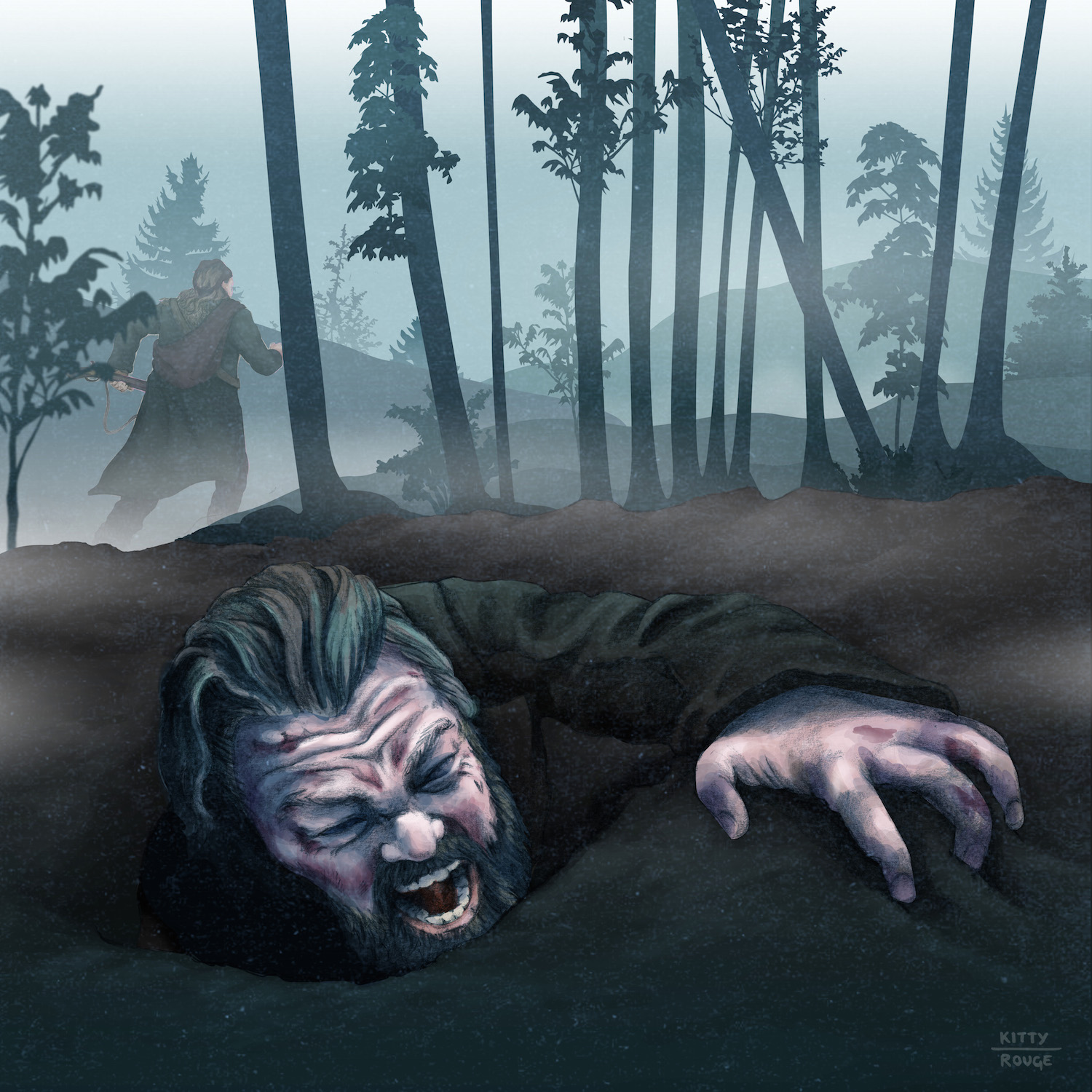 WARNING: Major spoilers are within. Enter at your own risk!

Following up the phenomenal success of BIRDMAN, Alejandro Iñárritu delivers a vastly different, but powerful film with THE REVENANT.  The movie centers on Hugh Glass, a frontiersman who is the head scout and navigator for a group of fur traders.  After their camp is destroyed by raiding natives, the survivors are forced to flee for their lives and Glass sets a course to cross over a mountain to avoid the pursuing raiders and gain some time over them.  While scouting one morning, Glass is terrifyingly attacked by an enraged grizzly bear who is protecting her cubs.  Horribly wounded, the party carries him as far as they can before the task becomes impossible, at which point the captain leaves three men to stay with him until he passes, including his son who is half white, half native.  Unfortunately, one of the men who volunteers to stay, John Fitzgerald, is a brutish and selfish man who tries to put Glass out of his misery.  When Glass’ son, Hawk, stumbles on the scene and tries to stop him, Fitzgerald kills him and stashes the body then lies to the other man with them and they leave Glass for dead and take off.  Glass, injured, heartbroken, and enraged, drags his mangled body from the shoddy half grave they left him and lays down beside his son to die.  However, he awakes and finds that he isn’t dying, so he decides to brave the winter, natives, and his own mangled body as he begins his journey to track down Fitzgerald and get vengeance for his murdered boy.

The directing in THE REVENANT is simply phenomenal.  Iñárritu’s talents are flaunted almost from the start, as the camera work during the Native’s raid in the beginning does an excellent job of portraying the terror and chaos of the moment by constantly switching angles, alternating between fast and slow camera movements, and using close ups to draw you into the tension of the moment.  As the film progresses the use of close ups becomes much more prevalent and necessary as they are used to chronicle Glass’ various emotions and mental states during his mostly solitary journey, allowing the audience to truly see the pain and hardships he is going through and empathize with it.  However, this is by no means a film shot mostly in close ups, as there are many panoramic shots that emphasize the vast landscape and the untamed nature of the wilderness the characters are traversing, giving us some of the most stunning and breathtaking visuals of the film.  When looked at as a whole, the camerawork, setting, and Iñárritu’s decision to use only natural lighting all combine to create an amazingly realistic looking tale of the frontier; giving us an amazing visual experience.

The best cinematography in the world won’t save a movie if it doesn’t have a compelling story; thankfully The Revenant takes a simple story of revenge and uses it to explore not only morality, but the prejudices of the time, delivering a story that is just as gripping as the film’s visuals.  The morality of revenge is a subject that has been explored by the arts since time immemorial, but the addition of the survival aspect in this movie gives the audience something else major to focus on so that the subject matter never becomes too heavy until the inevitable conflict between the adversaries.  Further enhancing the core story of the film is the continual examination of morality of prejudice that plays out.  As America is a country that was created by settlers displacing, killing, and exploiting the Native peoples, it is no surprise that there is animosity on both sides and enough fear and hatred to make even good people do despicable things.  The Revenant quietly explores these prejudices and the backlash that comes as the various sides lash out at each other, creating a compelling look at the damages humans unleash on each other and forcing the audience to contemplate the sins committed by all sides.  When you boil it down, the movie is primarily a fusion of a survival story and a revenge story, but it broadens the picture enough to capture the harsh realities of its historical setting, delivering a story that transcends either of those story traditions.

By far one of the most engrossing aspects of THE REVENANT are the fantastic performances.  Stepping into the role of Hugh Glass is Leonardo DiCaprio (THE WOLF OF WALL STREET) and he delivers one of the most powerful performances of his career.  Glass goes through some truly terrifying physical and emotional experiences throughout the film, and DiCaprio flawlessly captures every bit of it not only with his facial expressions, but with his delivery and body language as well.  I often found myself transfixed on his expressions, as they were so emotionally evocative that dialogue was unneeded, it was obvious what he was feeling, which was exceedingly impressive.  By the end of the film I found myself a bit emotionally exhausted as the mere empathy I was feeling for Glass was taking its toll, and it is awe inspiring that DiCaprio delivers a performance that draws out such a visceral reaction.  Delivering an impressive performance as John Fitzgerald, the film’s antagonist, is Tom Hardy (MAD MAX: FURY ROAD).  Fitzgerald is a man who is solely out for himself, focusing on his prospects and survival, and Hardy makes him the perfect embodiment of selfishness, infusing him with a cold, calculated ruthlessness that makes Fitzgerald as despicable as he is intriguing.  What continually draws me to Hardy’s performances are how well he loses himself in his characters, while I know this is the same actor who was in Mad Max and The Drop, he is so fundamentally different that I can’t even begin to equate this character, or any of his other ones, with him as a person, which speaks volumes of his acting talents.  Taking on the role of Captain Andrew Henry, the leader of the fur expedition, is Domhnall Gleeson (EX MACHINA) and I quite like him in the role.  Every time I see Gleeson in a new role I am impressed by how well he embodies his characters, and this is no exception.  He does an excellent job of portraying a man in charge, delivering his lines with authority and a certain level of emotional distance that one commonly finds in people of authority.  If he keeps giving performances of this caliber I don’t think it will be long until he is a leading man with a strong box office draw.

THE REVENANT is yet another masterful work by Alejandro Iñárritu.  By fusing together two traditional western stories he gives the audience a gripping tale with a unique feel, and he uses excellent shot selection and impressive natural lighting to create a film that feels very real and visceral.  Additionally, the acting talents in the film deliver top notch performances that will stick in your mind for days to come.  If you like westerns, are a fan of good acting, or merely want to watch an intense drama, then it is in your interest to see The Revenant in theaters, because it is  sure to be a satisfying experience.