The New PACIFIC RIM Trailer Will Explode Your Face! 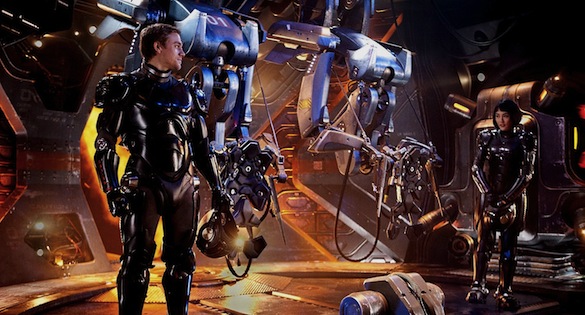 This new PACIFIC RIM trailer gives us so many ‘ARE YOU FREAKING KIDDING ME!?” moments, that I lost count the second Ron Perlman (HELLBOY) shows up looking as bad ass as ever. And we also get Charlie Day (IT’S ALWAYS SUNNY IN PHILADELPHIA) as some sort of kaiju expert? .. But.. these aren’t the moments that make you jump out of your seat.

OH. Quick catch up. PACIFIC RIM tells the story of a dimensional portal that opens at the bottom of the Pacific Ocean. From it spring giant monsters who want to eat the world. In response to this, the governments of the world create giant mechanized robots to fight the beast, MIGHTY MORPHIN POWER RANGER style. Piloted by two humans who control either side of the robot’s body, these big ole can of bolts wrassle these rascally kaiju with a lot of SMASH!, BOOM! & KAPOW!

Does this trailer give away too much?  I can’t say for sure.  The fight scenes have to be a lot longer then what we see here.  I have faith that these are only slight teasers of the monumental cup of outstanding that Del Toro is going to be serving us up.

Seriously, the final scene with the giant mech walking through a broken down city, might be the coolest thing I’ve seen in a long while.  This movie can not show up fast enough.