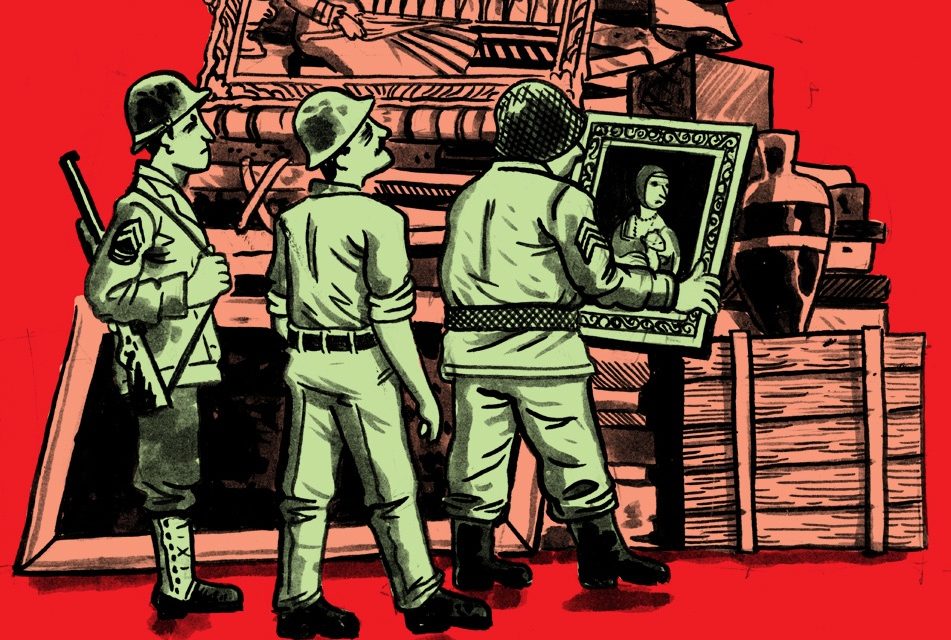 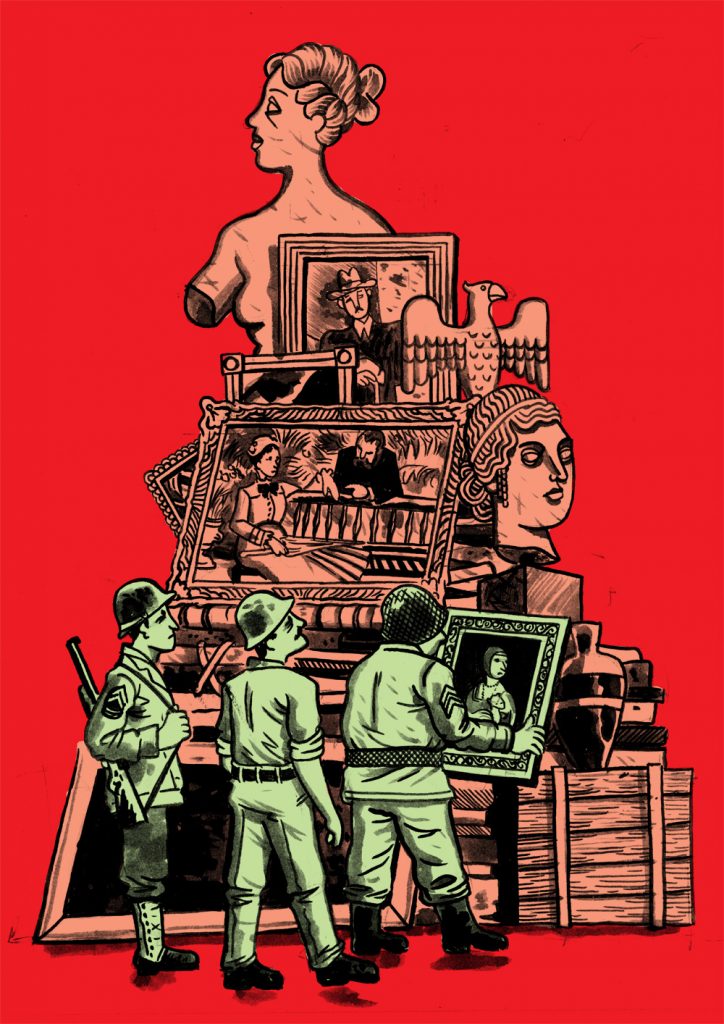 George Clooney (GRAVITY) pulls triple duty as writer, director, and actor in his new film THE MONUMENTS MEN. The movie is based on the true story of a World War II platoon of mostly middle aged to elderly men from the art world who have joined up for the mission of finding, recovering, and returning pieces of art that the Nazi’s have stolen. In the film, the men are gathered and led by Frank Stokes, an art professor who pitched the mission idea to the top brass, and all go to England for basic training. Once they reach mainland Europe, they split up to follow different leads, three groups head to different towns along the front while James Granger, a curator for the MET, heads to Paris to try and get leads on where the stolen art was taken.

There’s not much to say about the production of THE MONUMENTS MEN. Clooney has spent enough time behind the camera to do quality work, but nothing really stands out. The camera work is appropriate, and its blessedly free of the jittery, shaking camera that has become the fashion with war movies, but I didn’t see any shots that particularly wowed me. Everything looks right, at least when compared to other modern movies set in World War II, lots of rubble, bombed out buildings, accurate uniforms and so on, but there is nothing that makes it come off as more impressive than any other period film.

THE MONUMENTS MEN has a exceedingly interesting premise, however, the execution of the story is lackluster at best. The film gives very little background on any of the characters, making it difficult to really care about what they are doing; subsequently, I only found myself truly engrossed when actors I am fond of were on the screen, and it was them, rather than their characters, that I was interested in. Another problem was that the film didn’t seem to be any one thing, almost as if it was suffering from multiple personalities. There’s an intriguing story between James Granger and Claire Simone, the French woman who knows where the Nazi’s took most of the art, a fun buddy story between Richard Campbell and Preston Savitz, a smattering of a detective type investigation as Stokes tries to figure out where the art is hidden, a redemption story featuring Donald Jeffries, and some truly touching scenes of loss and dedication. Unfortunately, these different stories don’t add up well to a single whole, and while there were many great moments to love in the film, in the end the parts are greater than the sum.

The cast is easily the best part of THE MONUMENTS MEN because, even if you don’t care about the characters, its still fun to watch talented stars work their magic on screen. George Clooney plays Frank Stokes, and while he does try to add weight and importance to Frank’s mission, he mostly just comes off as his typically affable self. James Gardner is played by Matt Damon (ELYSIUM) and he does a decent job with the role. His boyish charm and sincerity work well for his character, who is trying to convince Claire to trust him, and he has nice chemistry with Clooney and Blanchett. I’ve long been a fan of Bill Murray (MOONRISE KINGDOM) and it was fun to see him take on the role of Richard Campbell. Murray easily stole every one of his scenes, bringing a heart and levity to the weighty struggle of the platoon, on top of that, his chemistry with Balaban was fantastic and provided most of the comedic relief of the film. Cate Blanchett (THE HOBBIT: THE DESOLATION OF SMAUG) fills the role of Claire Simone, and gives one of the best performances of the film. She is spot on as this surly and defiant French art aficionado and her exchanges with fellow cast members spark and sizzle, making every scene she’s in a treat. While I typically enjoy John Goodman (MONSTER UNIVERSITY), he was a bit hit or miss as Walter Garfield, but I feel this is mostly due to not having a lot to work with. At times he is wonderful, delivering witty repartee and lighting up the screen, but on a couple occasions his emotions seem forced and I found myself bewildered by these faux pas. Stepping into the role of Jean Claude Clairmont is Jean Dujardin (THE WOLF OF WALL STREET). Dujardin gives us some memorable scenes, but his character, like all the others, is so underdeveloped that its hard to make a connection with him. Hugh Bonneville (TV’s DOWNTON ABBEY) plays Donald Jeffries, a disgraced member of the art community who is hoping to regain his honor by being part of the platoon. Bonneville is perfect at playing British men of quality, and that is no exception here, as he brings depth and emotion to Jeffries, despite the clouded back story. Lastly, Bob Balaban (MOONRISE KINGDOM) fills the role of Preston Savitz, and he is great at bringing Savitz’ neuroses and frustrations to life. Balaban has great chemistry with Murray, and I would love to see the two of them pair again sometime.

I was really hoping that THE MONUMENTS MEN would be great, but it’s never much more than entertaining. The premise is wonderful, but in the execution we never get more than some very moving moments, and it fails to coalesce into a working whole, which leaves you with a somewhat bland taste in your mouth when all is said and done. The film’s saving grace is the cast, and if you are a fan of any of the many stars in this movie, then you will probably find some level of enjoyment in it, but otherwise you may want to pass on this one.