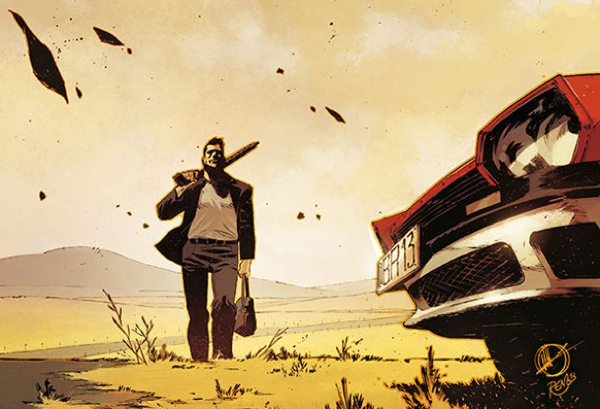 I’ve been waiting for Image Comics’ DEAD BODY ROAD for some time now. The promise of a gritty down to earth revenge story is just too enticing for a guy like me to pass up. Not much beats a good old fashion revenge epic. The cherry on top is that Image has been nailing it lately with stellar titles such as THE WALKING DEAD, INVINCIBLE, and SAGA just to name a few. Enter DEAD BODY ROAD written by the guy that gave us the stellar LUTHER STRODE series with equally stellar art by the talented Matteo Scalera (BLACK SCIENCE). Nothing here is overly complicated, it’s just a bad ass revenge tale starring a bad ass cop named Gage who wants answers and to carry out his own style of justice…piling up all the dead bodies of those responsible for his woman’s death. Understandable.

Jordan wastes no time here and gets straight to the action without a heavy or over-complicated story. Just the way I like it. A group of evil doers with greedy motives perform a bank heist that goes sour and a police woman (among others) gets killed in the line of duty. The thing is, the woman that got killed leaves a very disgruntled and pissed off man (Gage) in her wake who is now dead set on revenge. He’s pissed and he’s out for answers and blood. He even has a cop buddy on the case willing to look the other way. How convenient! Approaching this book as the equivalent of a fun summer blockbuster would be wise. Any higher expectation may set you up for some disappointment, and we wouldn’t want that now would we? The story “hooked” my simple little revenge loving mind just fine and it seems we have a classic case of style over substance. And that’s not always a bad thing.

Scalera’a art here is just perfect. He proved he can do great wacked-out science fiction with BLACK SCIENCE, and here he proves he has range offering up a classic American landscape filled with grit and good old fashion American action! It’s really fun stuff. His panels really give this book a great pace and the action sequences are structured just right. You can hear the glass breaking, feel the bullets wiz by, and smell the sweat beaming off all the misguided bad guys! DEAD BODY ROAD is a fun and messy modern day western revenge epic and I’m hungry for more!

The only real job any #1 comic has is to “hook” the reader into buying #2. Well, they got me! DEAD BODY ROAD is just my kind of book. The promise of a tough as nuts revenge story starring a somewhat mysterious bad ass complimented by some stellar art is not something you want to miss. This #1 issue hit all the right notes wit me. We have a simple (yet intriguing) story, a cool as ice lead in the form of Gage who has tunnel vision set to revenge, and some truly wonderful fast and fluid art to really amp things up and set a gritty tone perfect for a story of this ilk. Yes, DEAD BODY road is worth your time and revenge loving money.