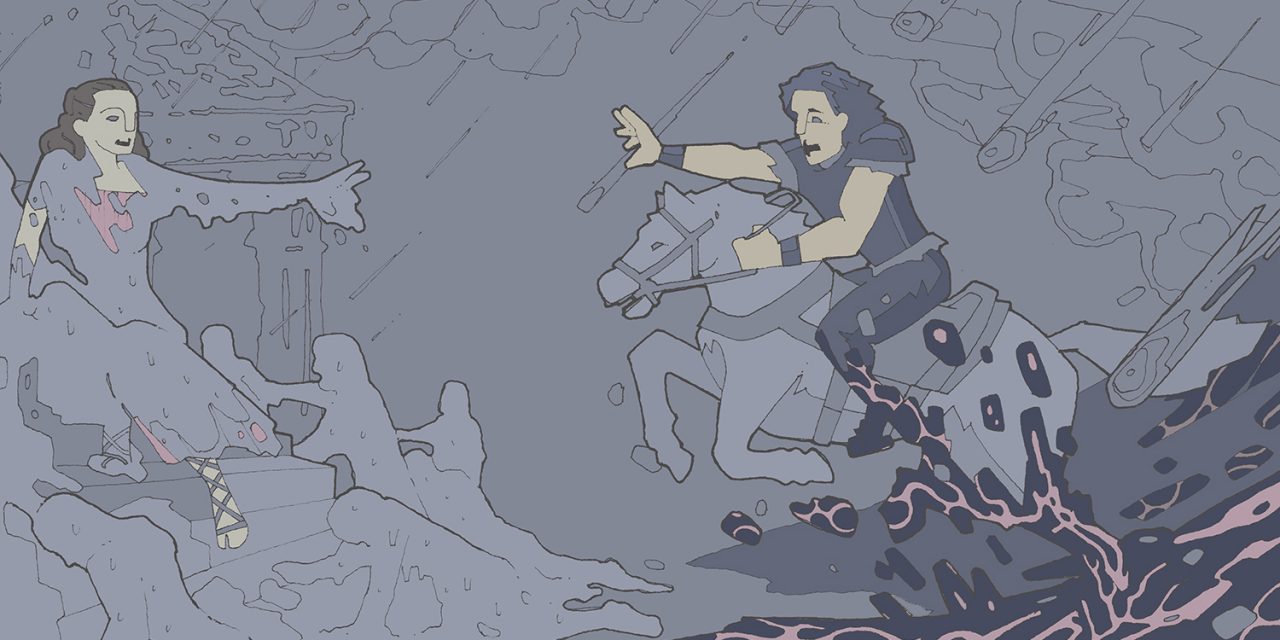 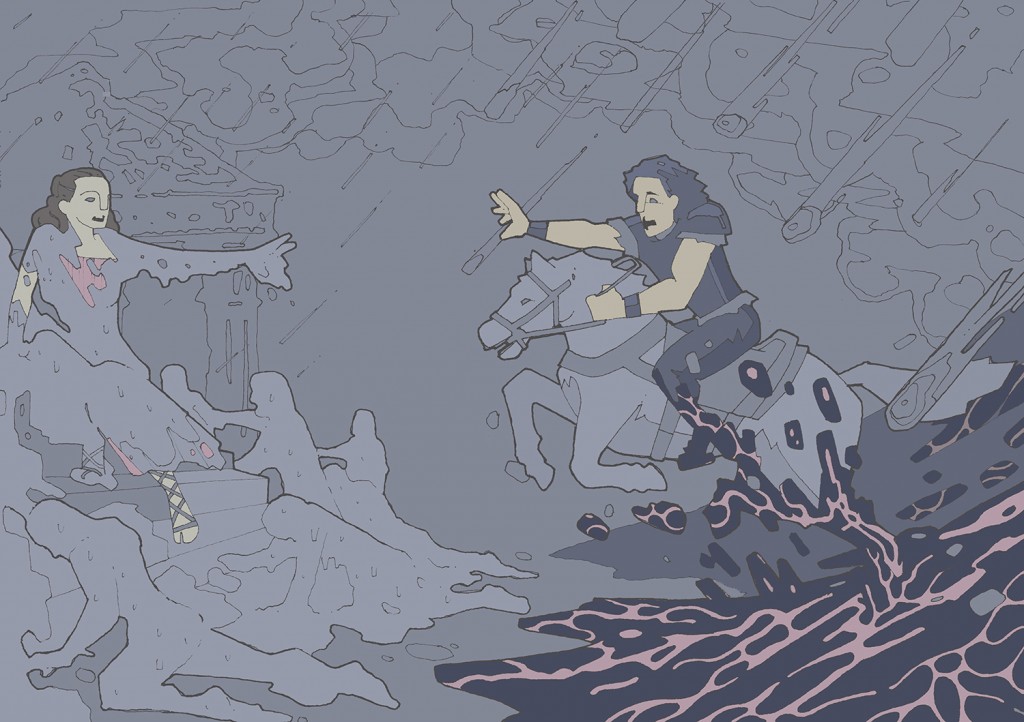 I just put some chicken fingers in the oven.  Their hot chickeny goodness is impending.  Soon, they will be upon me. But, not just yet.  Not just yet..

I should probably start of by saying that I don’t watch GAMES OF THRONES, so, I’m not too aware of who this Jon Snow character is. I will say though.. that this guy is so in shape that it made me questions a lot of fundamental things about myself. Especially while I was dipping my popcorn in the mustard I had left over from my hot dog.  ‘Jon Snow, you don’t know about mustard things.’ Okay.. maybe I know a little bit about GAME OF THRONES.

It was around the time that the ground first began rumbling in Pompeii, that I realized that this movie was a super amazing awesome fun time surprise.  I knew nothing about this movie before buying my ticket.  I hadn’t even watched a trailer for it.  It’s been a long time since I experienced that.  I remember when a friend asked me if I wanted to go see REIGN OF FIRE.  I had never heard of it.  Which is weird because I have always prided myself on being hip to all the latest movie news and gossip.  So, when he told me about a movie that took place in future London where dragons had wiped out most of mankind.. I was like  ‘Say Whhhaaaa…?!” I’m not saying that POMPEII blew my mind like REIGN OF FIRE did, but I was definitely very pleasantly surprised with how much I was enjoying myself during it.  Shit, I should probably actually start talking about it.

I guess I’m procrastinating on getting down to the nitty-gritty of it all, because there isn’t really a lot to say about the plot of this film. Only that its main story lines will be fairly recognizable to you.  A young Celt witnesses the murder of his entire village, ala CONAN, and grows up to become a bad ass gladiator with abs that could cut the heterosexuality right out of your body. His vengeance is focused towards the Roman guard who completely annihilated his horse tribe. OH. Shit.  Guess who the bad guy is in this movie? Keifer Sutherland!  (24, LOST BOYS) I told you that I knew very little about this movie, but, I thought I would have heard that Keifer ‘Vampire Mullet’ Sutherland was the bad guy in a gladiatorial disaster porn film directed by Paul ‘Wyld Stallyn’ Anderson (RESIDENT EVIL)! I mean, that’s sort of big news?  Right?

Anyway, the young Celt, Milo (played by Kit Harington of GAME OF THRONES), grows up to become one of the most kick butt gladiator fighters in all of the outlining districts. Once he earns the attention of the living embodiment of Hedonism Bot, he is packed up and shipped off to the beautiful vacation spot of Pompeii. Along the way, he perform the generous act of painlessly killing a crippled horse and gaining the favor of the returning princess of Pompeii, Cassia. Wait, did the Roman’s even have princesses? Lady of high majesty.  Cassia is played Emily Browning and whenever I see her, I can’t help but think of her role of Baby Doll in SUCKER PUNCH.  Man, I have not see that movie in a while, perhaps I need to make a second swing at it? Naturally, Milo and Cassia fall for each other and slowly embrace their traditional roles of ‘pretty girl royalty falls for her rough and tough boyfriend from the wrong side of the streets who is on a mission to avenge his family but first has fight for his life in a series of bloody arena battles.’  Once we figure this out, it’s just a question of figuring out how they will get together and how tragic their love story is going to be.  Don’t you just adore love stories set in the shadow of impending doom?

Don’t forget, the volcano is coming for you.  Just like my chicken fingers.

When Cassia and Milo arrive in Pompeii, Cassia is greeted by her ‘way too good to be true’ parents, played by Jared Harris (SHERLOCK HOLMES:  A GAME OF SHADOWS) and Carrie-Anne Moss (THE MATRIX Series) and Milo meets his ‘heart of gold,  the most bad ass king of the ring  gladiator and old black mentor played by, Mr. Eko himself,  Adewale Akinnuoye-Agbaje (LOST).  As fate would have it, Keifer Sutherland also shows up and we discover that he’s, not only the guy who butcher Milo’s family, but he is also the reason Cassia fled from Rome. The rest of the movie consist of Milo trying to stay alive in the arena, Cassia trying to keep Keifer’s meat hooks off of her and some scary volcano foreshadowing doom shenanigans. It’s an interesting enough cinematic ride that ends with a very generous CGI payoff.

Like I said earlier, I was really surprised by how much I liked this movie.  It knows what it is and does a really good job at keeping its bar in the right spot. I feel like the mix of gladiator film and disaster film made for a pretty great combination. I can only imagine that a lot of people are mentioning TITANIC in their reviews of this movie, which makes sense considering the plot.  POMPEII is basically if Jack was a slave and cut off the faces of the Irish immigrants in an under the deck cage fight.  Even knowing that it is only a matter of time before the volcano in the background sets everyone on fire, you find yourself anxiously waiting to see how our heroes will work their way out of their non-volcano related dooms. It’s all very interesting and enjoyable but once the volcano starts doing it’s thing, all you can wonder about is who is going to get out with their skin still attached?

POMPEII could have easily been some throw away movie that you find yourself watching on some rainy Tuesday and never thinking about again. Paul Anderson did a really good job at making this movie compelling enough that you don’t notice how cliche’ most of the plot is. The acting is solid and the story line is enjoyably enough.  While most of these positives dominate the first act of the movie, the second act definitely belongs to the volcano. Yes, in the actual history of the eruption, many Pompeiians knew that the volcano posed an immediate threat and quickly abandoned the city, but a lot of people did stay behind and this movie does a really amazing job at displaying how inescapable the destruction was. On paper, this movie has everything you would need to be properly entertained for two hours and it executes all of it pretty swimmingly. I don’t usually do 3D and I’m happy I did with this film.  There was actually a scene that made me jump a little in my seat.  I feared for my teeth. My beautiful teeth. It’s been a long time since Paul Anderson got to flex his artistic muscle and the movie is better for it.  Definitely don’t let this movie fall of your radar.  And if it’s not even on your radar, well.. then.. put it on there.

PS. The chicken fingers burned off the entire roof of my mouth.