THE MAN WITH THE IRON FISTS Red-Band Trailer: They Put The F-U In Kung Fu 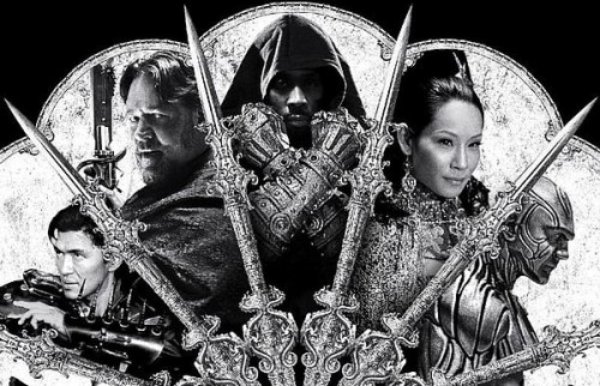 For those out of the loop, it might be a surprise to learn that the musician RZA (Wu Tang Clan, KILL BILL score) has directed a martial arts movie coming out later this year. Anyone who has followed his career can see this as the culmination of childhood dreams come true. Rza’s music and film sensibilities are very much influenced by martial arts and the martial arts film genre. RZA co-wrote the film (with “Bear Jew” Eli Roth, writer/director of HOSTEL I and II) and is its male lead. It’s a good thing that someone with so much affection for the genre has been given creative control.

In THE MAN WITH THE IRON FISTS, RZA’s character is a blacksmith in a rural village in China who makes unique  weapons (i.e. visually creative in the way they murder) for thugs, mercenaries and overall villains. At one point, his character gets pushed too far and he must battle the baddies for the lives of the villagers and to maintain his honor. The plot is boiler plate but an inventive plot is not what makes martial arts engrossing. It’s all about the visual creativity and memorable characters. Let’s see if it might deliver the goods.

If this trailer in any way piques your interest I implore you to read this short interview RZA did a while back that speaks to his love for the genre. It will serve to solidify your anticipation for this film. The Man with the Iron Fists is a passion project made with care and thoughtfulness to stay true to the spirit of the illustrious genre. Aside from RZA’s enthusiasm towards the subject matter, this film seems to have a lot going for it. One, it is “presented” by Quentin Tarantino which means he has seen it and likes it enough to put his brand name in front of the film. This comes as no surprise since he and RZA are friends and have worked together before (KILL BILL score). They both are super nerdy about the martial arts film genre especially the movies coming out in the 1970’s. The tone and plot of the film/trailer remind me of Sam Raimi’s 1995 THE QUICK AND THE DEAD. The film revolved around a rundown western village inhabited by thugs and mercenaries who were all there to kill each other for some grand prize. The film was shot in a very manic and zany fashion. Sound familiar? If THE MAN WITH THE IRON FISTS is half as good then we’ve got ourselves a winner. Another common thread between the two films: Russell Crowe (GLADIATOR). He’s a great actor when he wants to be but usually works in self-serious movies. Seeing him in a grindhouse type of film will give him the opportunity to show us a different side of himself. Lastly, the weapons. They look great and like they’ll cause some serious damage in a creative and groan-inducing manner. Sure the CGI blood could have been better but that would’ve meant a bigger budget which would’ve meant more nervousness and possible intervention by investors. As long as the characters and action delivers nobody will mind.

THE MAN WITH THE IRON FISTS dropkicks its way into US theaters September 24, 2012 (as the date approaches check local listings to be sure)