THE MAN FROM U.N.C.L.E. Film Review 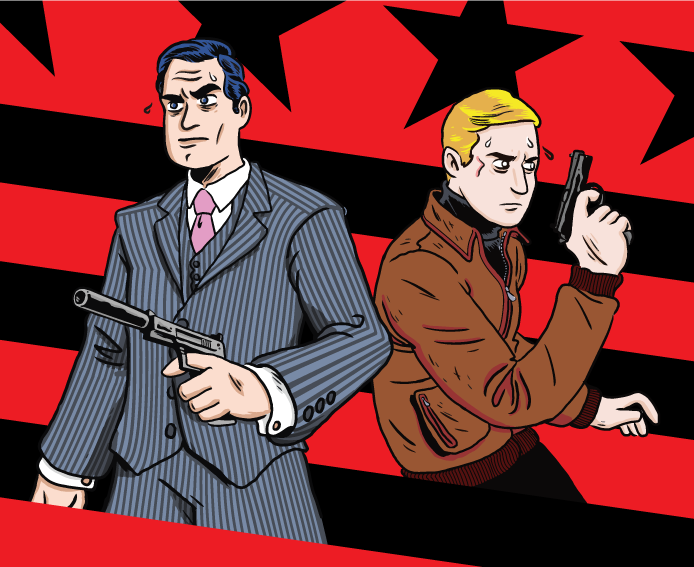 When did international super spying become so gosh darn depressing?

INT.  NICARAGUAN CEMETERY  – SUNSET
Jappers Porne places flowers down upon a grave.  He stares longingly towards an impending rainstorm.  His emotions are as dangerous as the Walther PKK pressing against his damp thigh.  He broods.  Everyone broods.  His bullets are tears his body is no longer able to shed.

I remember watching James Bond slide out of bed with Shirley Eaton and insisting that ‘there are some things that just aren’t done, such as drinking Dom Perignon ’53 above the temperatures of 38 degrees Fahrenheit.’  How cool is that?  He’s in bed with one of the most beautiful women in the world and jumps out to make sure their sex juice is properly chilled. They bone and then he saves the world. In a global environment where audiences didn’t know if an atom bomb was actually going to bust up their Sunday picnic, international espionage in movies had found a way to come across as lighthearted and charming. It’s something that’s been severely missing from the genre for quite a long while. It wasn’t until I stepped out from seeing KINGSMAN:THE SECRET SERVICE (Check out that NERD review HERE!)  that I started to suspect that this may be the year where we see the return of the fun super spy movies. And no, AUSTIN POWERS: INTERNATIONAL MAN OF MISERY does not count.

At some point, spy films became more about psychologically flawed kick boxers struggling with their government injected complexes and less about sitting by a pool drunk and watching a laser beam carve someone’s initials into the side of moon. (Wait, am I thinking about THE TICK?) It’s clear that Guy Ritchie missed seeing international spy craft that was more about having a cheeky fun time rather than focusing on the darkness of our own world. THE MAN FROM U.N.C.L.E. is sexy and charming, full of some of the most beautiful people you will ever see trying to break the camera with the amount of fun they are having in exotic locales, surrounded by high fashion and delivering some of the coolest commentary I’ve experienced in a long time. You find yourself smiling throughout the entire film and swept up by every line delivered. It’s everything the new Bond movies could have been.

The plot of these movies are usually inconsequential and serve only to jet set our heroes around the world and into the arms of the worlds nastiest and wealthiest.  Regardless of all that, dear boy, I will still sum it up for you.  A former art thief named Napoleon Solo, played by Henry Cavill (MAN OF STEEL), is recruited by the CIA and forced to look beautiful and save the world.  He teams up with tough as nails auto mechanic, played by Alicia Vikander  (EX MACHINA) and her outstanding bangs, who despite not being a highly trained agent, is the only character who doesn’t struggle with her emotions and stays on task. Napoleon is forced to team up with his grumpy Soviet counterpart and nemesis Illya, Played by Armie Hammer (THE LONE RANGER). Illya’s badassery is equaled only by the bubbling volcano of rage he battles throughout the entire film. These three heroes all tag team it up and attempt to stop some ‘rogue nation’ from detonating an atom bomb and holding the world hostage. That ole chestnut.

At times, this movie felt like it was made in some parallel reality where women dominate the action genre and men are usually just the overly emotional eye candy that serve no real importance to the film’s plot. Guy Ritchie, having grown tired of not seeing strong male characters in action films, attempted to make a spy movie with two male leads.  Unfortunately, he fails at making them more than just traditional male stereotypes.  The male heroes in this movie are consistently betrayed by their own emotions and are constantly fighting battles with themselves and each other. All the while, the female characters are strong and continually overcome their own emotions in service to their mission. Even when Vikander is ‘rescued’ by our male heroes, she is the one saving them by keeping them on task and in control of their overwhelming emotional shortcomings.  The women seduce the men. The men nitpick about fashion and appearance. They are easily offended and insecure. Not a bad first attempt at a male featured action film, but, it fails to propel the genre forward. Okay ‘Alternate Reality Movie Review’ time is over.

Yes, the world is on the verge of destruction, but, that’s not the main focus of this film.  The main plot sets up the story board pieces and then casually fades into the background so that we can focus more time on the things that matter:  Watching Napoleon and Illya continually one up one another and slowly gain each other’s trust (JUST KISS ALREADY). Guy Ritchie’s storytelling also allows for ample time for us to watch Napoleon and Illya being told to betray each other and then refusing to do so and then betraying each other and then deciding not to. THE MAN FROM U.N.C.L.E. is crazy stylish and full of so much cinematic eye candy. Guy Ritchie navigates the genre perfectly and even finds ways to throw some unexpected curve balls.  You can tell Ritchie had fun with this movie.  There’s an entire boat chase scene that you only see in the reflection of a car window while Napoleon eats a sandwich. The female characters are all badass.  This movie is full of spy gadgets and highly enjoyable movie montages. I left the theater hungry for more.