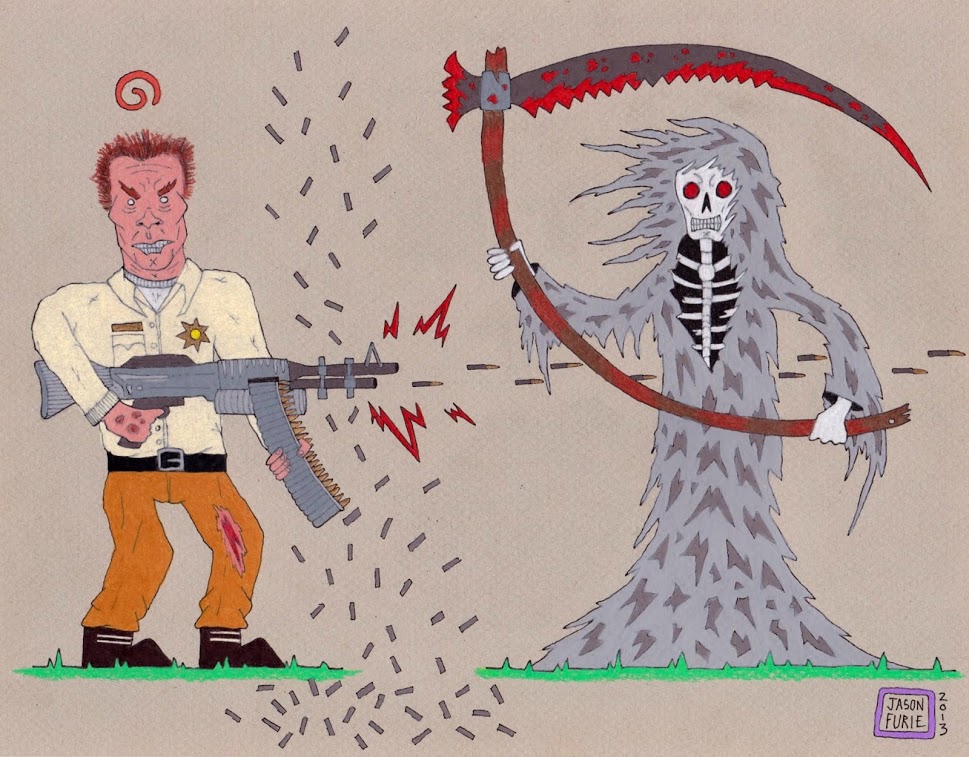 I need to get something straight before I dive into this review. I wanted to like this movie. I really did. Audiences have not seen Arnold Schwarzenegger as the lead in a feature film since 2003’s TERMINATOR 3: RISE OF THE MACHINES. That’s 10 years! Sure we briefly saw him in THE EXPENDABLES and got to see him a little more in THE EXPENDABLES 2 (so awesome!), but never as the lead until now. I have to admit, I missed the big guy. Knowing that Schwarzenegger was going to be returning as the lead in a brand new action movie had me all giddy inside. And on top of all that, this film serves as the excellent Korean director Jee-woon Kim’s (THE GOOD, THE BAD, AND THE WEIRD, I SAW THE DEVIL) American directorial debut. My inner nerd could not have been more excited. Did I over-hype Schwarzenegger’s return to film? Probably. However, I don’t think my expectations were that unreasonable. I mainly just wanted to see Schwarzenegger blow some shit up, have a couple of cool one-liners, and witness a handful of awe-inspiring action sequences. Sure I got some of this, but what surrounded those small moments of enjoyment was a paper-thin story, absolutely horrendously acted characters, and some pretty uninspired action sequences leading into a boring and unimpressive finale. While I loved seeing Schwarzenegger back at it, I was too often bored, uninvolved, and annoyed to enjoy myself. When the credits rolled and the dust settled, THE LAST STAND tuned out to be a huge missed opportunity for both Schwarzenegger and Kim as a director.

As mentioned above, the story here was paper thin. I had no illusions that the story was going to be deep or complicated, but I did expect to be somewhat engaged. I just wasn’t and was often bored and really didn’t give a flying bat crap about anything that was going on. In short, the leader of a big drug cartel escapes captivity and speeds his way towards the Mexican border where the only thing in his way is a small town that consists of an aging sheriff (Schwarzenegger) and his inexperienced staff. No real twists or turns worth mentioning and it was all just formulaic garble that did not impress. I think the concept of an aging Sheriff protecting his town from evil and corruption could be cool (and has been in many other movies), but it just wasn’t this time around. I feel like Sylvester Stallone did something very similar in 1997’s COP LAND and that was a much more interesting and character driven attempt that actually worked for me. 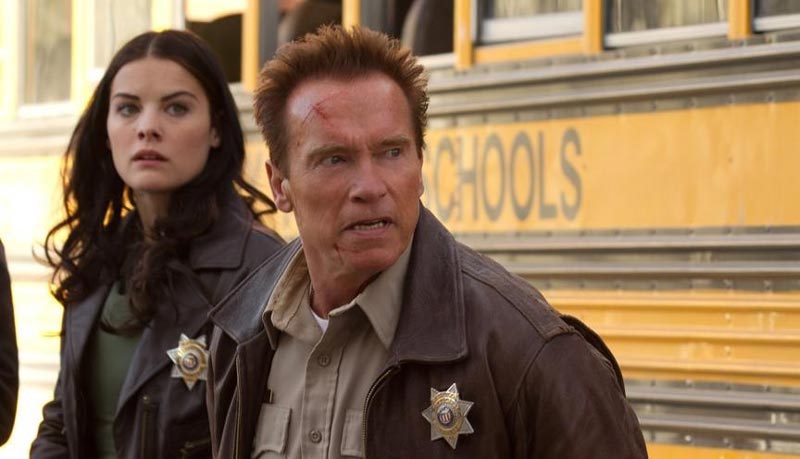 The biggest issue I have with THE LAST STAND is with the characters and the actors portraying them. I love Schwarzenegger as an action hero and he really was the only decent thing going here. I can totally accept him as a grizzled bad ass and think he pulled it off well. Welcome back! Other than him, everyone else just seemed shoehorned in and fake. There were SO MANY peripheral characters in this film that it was hard to keep track of them all. I suppose some noteworthy names include Johnny Knoxville (JACK-ASS) as the “comic relief” that was just not funny at all, Luis Guzman (BOOGIE NIGHTS) doing his best “Luis Guzman” impression, Jaimie Alexander (THOR) as a boring and uninteresting young cop who also serves as a weak love interest, Eduardo Noriega (OPEN YOUR EYES) as a completely forgettable villain, and (believe it or not) Forest Whitaker (GHOST DOG) in his most “phoned in” performance to date forcing me to believe that he owed someone a huge favor or something to be in this film. It was THAT bad. Shame on you Mr. Whitaker. I suppose that one saving grace out of the mess of characters would be Peter Stormare (FARGO) who plays up his typical sleazy villain role as good as ever. He’s so good at it! Sure there were a lot of other characters but none worth mentioning. I can’t stress enough how unnecessary 85% of the characters in this film were. I just don’t think it would have been that hard to focus way more on Schwarzenegger, maybe a few supporting characters, and one ultimate villain. This could have been a really cool character piece that ended up being an exercise in patience as I had to watch countless characters robotically spit out lines that had no meaning or impact.

Arnold Schwarzenegger is easily one of the biggest names in action sitting comfortably next to Sylvester Stallone and Bruce Willis. So when I bought a ticket to see THE LAST STAND I expected some great action sequences at the very least. I can forgive a bad story in an action movie, and I can forgive (barely) the horrible characters as long as the action delivers and hopefully overshadows the films downsides. This is just not the case with THE LAST STAND. Sure it’s totally kick ass to see Schwarzenegger back in action, but a few hours after the credits rolled, I forgot most of what happened. I can really only think of one standout scene involving Schwarzenegger that had me somewhat impressed. That’s just not enough to feed me what I wanted. As if a few uninspired action sequences peppered throughout one and a half hours wasn’t enough, it all leads up to a really awkward and slowly paced finale that looked like the set of a LOONEY TOONS episode featuring the Road Runner. The set pieces here were so bad and full of so much shoddy CGI that I could actually hear the Road Runner honking “Beep Beep” in the back of my head. It was obviously all done in front of a green screen and there was an evident overuse of body doubles. While I surely enjoyed seeing Schwarzenegger punch assholes in the face again, something about the whole final battle was just “meh”. When it was all over, I was left with a growling belly that wanted much better action sequences than what we actually got. It’s kind of like going out and eating Sushi. Tastes good, but the second you get home you want to eat a sandwich or something. 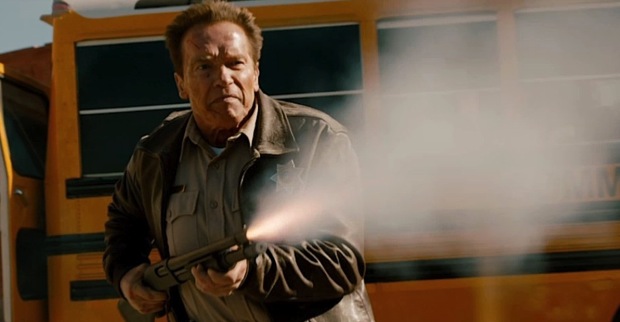 While it may seem like I am being overly critical here, I feel it’s justified because THE LAST STAND was one hell of a missed opportunity. We had the return of an action icon coupled with a wonderful director. This should have been a home run. I honestly got WAY more pleasure out of the few minutes we had with Schwarzenegger in THE EXPENDABLES 2 than I did with anything in THE LAST STAND and that makes me sad. I did not expect an award winning script, deep characterization or any all-star performances. However, I did expect a handful of memorable action sequences with a healthy amount of one-liners in between. Instead I was left with a messy and formulaic story full of unbearable characters, boring robotic dialogue, and uninspired action sequences. I can only hope that this is not the new standard for Schwarzenegger. This is seriously my least favorite Schwarzenegger action film in memory besides COLLATERAL DAMAGE. Yes, I would say that I liked END OF DAYS, THE SIXTH DAY, and even ERASER more than this. I fully admit I may have over-hyped this one a bit too much, but I find it extremely hard to imagine getting much more enjoyment out of this one if viewed again. Even still, I am very happy to have Schwarzenegger back where he belongs and will eagerly await his next outing in THE TOMB later this year alongside Sly Stallone. I learned my lesson and will go into his next film with much lower expectations.