THE HOBBIT: THE BATTLE OF THE FIVE ARMIES Movie Review 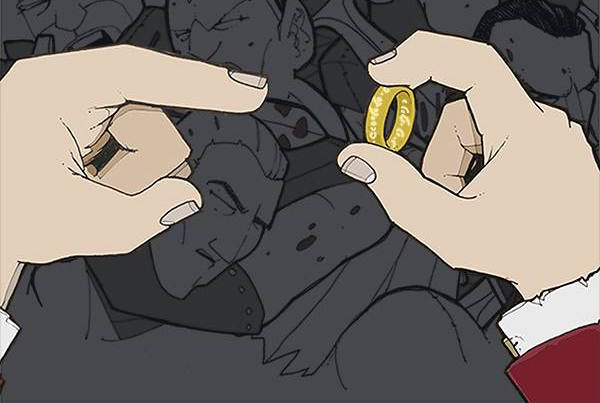 Peter Jackson (THE LORD OF THE RINGS TRILOGY) has wrapped up his time in Middle Earth with THE HOBBIT: THE BATTLE OF FIVE ARMIES, the action packed final chapter of his Hobbit Trilogy. The film picks up where the last one left off, with Smaug bringing hellfire down on Laketown for helping the dwarves on their quest to reclaim the Lonely Mountain from him. In the aftermath of the attack, the survivors of Laketown head to the mountain to seek aid and refuge, only to find it sealed up tight and guarded by the dwarves, who have become quite miserly with the absence of Smaug. In short order the elves of Mirkwood arrive also looking to claim recompense for the dragon’s destruction over the years, and are rebuffed by the dwarves. Meanwhile, Gandalf and The White Council succeed in ousting Sauron from Dol Guldur, and Gandalf moves with all haste to the mountain to warn all in the vicinity of the impending arrival of a massive army of orcs. The stage is now set for the monumental battle that will determine the fate of the Lonely Mountain and Smaug’s hoard of treasure.

This latest film in The Hobbit franchise continues to be a disastrous adaptation of the novel, but I’ve already written one rant on the subject and will not spend much time focusing on that. The biggest improvement in the production over the last film was the pacing. This movie flowed very well and didn’t feel overly rushed or slowed down, it moved very naturally. This time around I had the opportunity to see the film on a screen that boasted an upgraded projector, so I was able to see the film the same way it was shot, at 48 frames per second. I was instantly struck by the clarity on screen, and it took a little getting used to, as it didn’t resemble what I have come to expect movies to look like. While the clarity was a amazing, it had one down side, it was very easy to tell when things were computer generated and certain materials that were supposed to be wood or metal came off looking like the plastic they probably were. In fairness, all these drawbacks do is raise the bar on what needs to be done in the FX and costuming departments if you want to film a movie in a high frame rate, and the breathtaking clarity is certainly a giant leap forward in the visual medium.

The film had solid directing with plenty of interesting shots, particularly the gorgeous wide shots of the battle fields and the various landscapes. I was surprised to learn that Andy Serkis (DAWN OF THE PLANET OF THE APES) helmed the second directing unit and, based on his work with the Laketown opening, would be interested in seeing him helm a full length feature. Along with the directing, the sets were amazing, whether computer generated, built, or a combination of the two, the various sets brought Middle Earth to life and really make you believe these places exist. A minor issue I had with the production was the lack of blood. While I understand that The Hobbit story is geared more towards all audiences, it is the predecessor to The Lord of the Rings and takes place in the same world, so I don’t understand why Jackson would make this movie PG-13 like The Lord of the Rings Trilogy, but would tone down the graphicness of the violence, the LOTR trilogy was not gory but it at least made it seem somewhat realistic, whereas this film has so little blood it is completely unbelievable.

The story, while not being overly representative of the book, was an appropriate conclusion to the film trilogy. While I was disappointed that far fewer of the dwarves that set out from the Shire die in the film than in the book, I thought they did a good job tying the various story threads together in a way that made sense for the films. I particularly liked how they wrapped up the drama between Legolas, Tauriel, Thranduil, and Kili, as it had a conclusion that felt genuine while doing a nice job of foreshadowing the future. Another fantastic conclusion was how they brought Thorin Oakenshield’s story to its epic climax. Thorin is forced to come to terms with his own greed and ambition and face down the demons that his forbearers succumbed to, in doing so he achieves redemption and truly lives up to the title of King under the Mountain. While the story could have been a bit more in-depth and impact, there is no denying it was great fun.

I was very pleased with the cast, but there were so many fun and wonderful performances that it is hard to touch on them all, so I‘m just going to focus on those I most enjoyed. Martin Freeman (TV’s SHERLOCK) reprises the role of Bilbo Baggins, and he does quite a nice job with it. Freeman really brings Bilbo’s kind heart and steely courage to life, giving us a character that is heartwarming and admirable. Returning once again to the role of Gandalf was Ian McKellen (X-MEN: DAYS OF FUTURE PAST) and he is just as great as when he first donned the grey hat. McKellen infuses Gandalf with the intensity and wisdom one comes to expect from a wizard, as well as an air of mystery that makes the character always seem one step ahead of everyone, giving us a delightful performance that will keep a smile glued to our faces. I liked the duality of Thorin, as he struggled with the temptation of greed and selfishness versus the honorable man he previously was, and this was portrayed wonderfully by Richard Armitage (CAPTAIN AMERICA: THE FIRST AVENGER). Armitage was able to give Thorin the authoritative air that was so necessary to make the character come to life, and he maintains this air through his internal struggles and bittersweet triumphs, it was a noteworthy performance and I hope more like it are in his future. Evangeline Lilly (REAL STEEL) did a nice job with the role of Tauriel, the elf warrior who fell in love with Kili, a dwarf. Lilly does a nice job of portraying Tauriel’s conflict between her culture and her heart, giving an understated yet memorable performance. We get to see Orlando Bloom (THE THREE MUSKETEERS) reprise the role of Legolas, and it’s a blast because he returns to the fun, face paced action sequences that made his character so fun in The Lord of the Rings. Luke Evans (DRACULA UNTOLD) continued in the role of Bard, and he did a great job with it. Evans is perfect as a man who has leadership thrust upon him and rises to the challenge, giving us a command performance that dominates the screen. Lastly, I want to give a quick mention to Billy Connolly (BRAVE) who played Dain, a dwarven king who comes to the aid of Thorin and company. Connolly is terrific fun and he easily steals every scene he’s in with his infectiously arrogant attitude.

THE HOBBIT: THE BATTLE OF FIVE ARMIES is an apt conclusion to The Hobbit Trilogy. It looks gorgeous, has some very fun performances, and is chock full of action and characters we have come to love. It suffers a bit in the story department, and some of the stylistic choices are a little off, but if you are looking for a good time at the theatre this holiday season, then this might just be the movie for you.