The Hobbit: An Expected Second Trailer 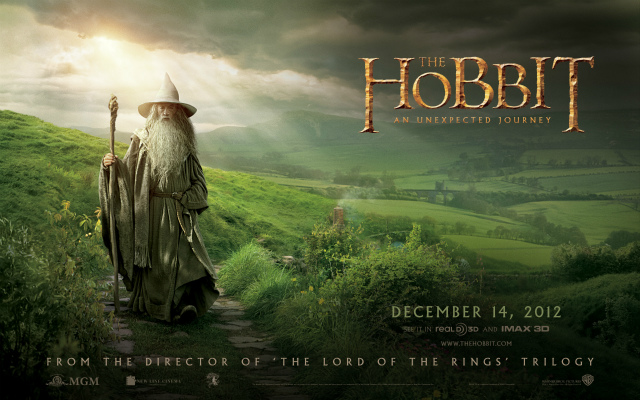 Unless you’re a goblin living deep under the Misty Mountains of Middle Earth you’ve probably heard that JRR Tolkien’s The Hobbit has been in the process of receiving a grand Hollywood adaptation. You’ve also heard that Peter Jackson (LORD OF THE RINGS Trilogy) and crew –and some cast– have also reembarked on the perilous journey to catch lightning in a bottle for the second time. Back in December Warner Bros. released a first Hobbit trailer that had Middle Earth geeks jonesing for more (there will be dwarf singing!) Side note: If you do want more of that Middle Earth good stuff Jackson has been a benevolent dealer in distributing eight fantastic video diaries of the various levels of production).

This week the much anticipated (nine months to be approximate) second trailer hit the internet community. Let’s see what it does to our anticipation.

Ah, the obligatory second trailer where the plot of the movie is exposed. For those of you who never read the book (I read it earlier this year for the first time in anticipation for the film and found it to be a pleasant and clever little book –I recommend) the plot is as follows: Bilbo is a simple man leading a simple life in a simple Hobbit village. Gandalf comes to The Shire with 14 dwarves who are on a mission to steal a whole bunch of gold from a nasty dragon that they believe is rightfully theirs since it once belonged to one of their ancestors. Bilbo is coaxed into joining the mission. Or something like that. Getting there, of course, is treacherous and even if they do arrive in one piece what will they do with the dragon? If you’ve seen or read The Lord of the Ring books/movies you know what sort of story to expect. For better or for worse.

I will say this about the second trailer: The movie looks beautiful. I’m hoping that the decision to shoot digital and in 48 fps adds to the cinematic experience and that the negative press of early sneak peeks are knee-jerk reactions to new technology. Jackson, like James Cameron (AVATAR, TITANIC), is known in the movie industry for pushing technological boundaries and when both of them claim 48 fps as the future of cinema one can’t thumb his nose. All that is to say, I hope we get a compelling narrative and memorable characters that have time to forge an identity (there are so many characters to keep track of in the book). Also I’m curious as to how the book will be stretched into three movies. LOTR was three movies but there were also three books. The Hobbit is around a 200 page children’s book. Jackson stated that they took from appendices and other short stories and even made some stuff up for the movie so as excited as I am, I’m also a bit weary.

Here’s hoping that Jackson and crew survive this epic journey. Part 1 of 3, The Hobbit: An Unexpected Journey opens wide in US theaters December 14th, 2012.