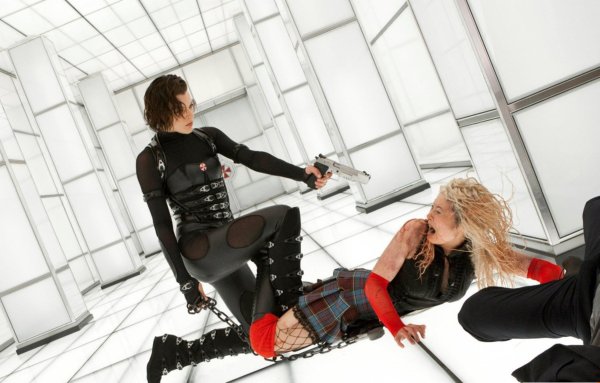 Milla Jovovich (THE FIFTH ELEMENT) steps into the role of Alice for a fifth time in RESIDENT EVIL: RETRIBUTION and once more her husband, Paul W.S. Anderson (RESIDENT EVIL Franchise) is writer/director/producer all rolled into one. In this latest installment Umbrella Corporation continues to be the antagonist, using viral warfare to advance their own world agenda and take out their enemies, while an outnumbered and seemingly outclassed group of anti-Umbrella agents struggles against them. Sound familiar? But lets be honest, with this being the fifth movie in the franchise from the same creative team, anyone who has seen even half of the Resident Evil movies should have a pretty good idea what to expect, and that, of course, is monsters and action; which this latest installment is packed with. 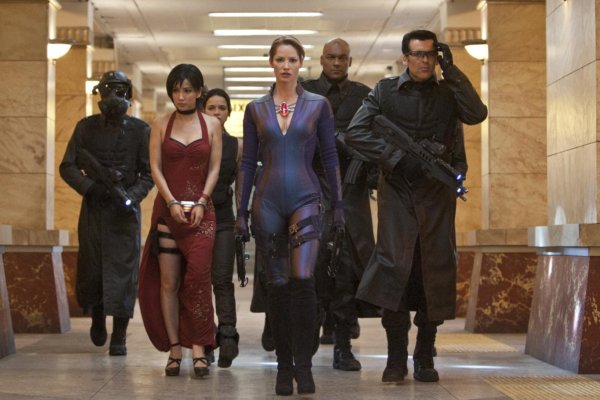 If you are heading to this movie hoping for a great plot or a story more closely related to one of the Resident Evil video games you are going to be disappointed, but that’s not to say it’s a bad movie, in fact there are quite a few positives in RESIDENT EVIL: RETRIBUTION.  MINOR SPOILERS ALERT  The center piece for this movie is really the creative setting. The majority of the movie takes place in an underground Umbrella testing facility, and while that seems like old hat, they actually put some fun creative twists into it. The facility features replicas of certain cities and suburban areas to simulate actual virus outbreak scenarios; this allows for many location changes in the story and ample homage to zombie movies of yesteryear (DAWN OF THE DEAD and DEAD SNOW are just two that spring to mind). Another positive (although some might take it for a negative) is the continued use and introduction of characters and monsters from the Resident Evil video games and movies. The newest additions to the cast this time around are Ada Wong (played by Bingbing Li (THE FORBIDEN KINGDOM)), Leon S. Kennedy (played by Johann Urb (THE BANK JOB)), and Barry Burton (Played by Kevin Durand (ROBIN HOOD)). We also get some old faces back from the first movie with Michelle Rodriguez (AVATAR) reprising her role as Rain, and Colin Salmon (TV’s SINGLE LADIES) returning as James “One” Shade. I know many of the diehard fans of the Resident Evil video game franchise don’t like the movies (but they clearly aren‘t going away so get over it already), but I am happy that they at least make an attempt to use characters and monsters from the games. Its fun to see characters I love on the big screen, even if its not quite the way I would have chosen to portray said character, and it is always entertaining to see an over the top monster smash things. 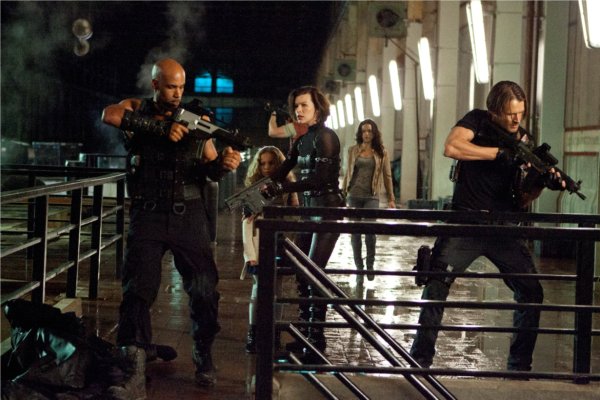 While we are on the topic of smashing things, the action in this movie is one of its saving graces. The opening action sequence is definitely one of the highlights of the movie, and it really does an excellent job of setting up the tone of the film. Like its predecessors, this Resident Evil movie is once again full of Alice and crew kicking ass, and while some people may be tired of it, I still find it fun to watch. There is a nice variety of monsters and scenarios thrown in to keep things interesting, as well as the occasional uncommon weapon choice to spice things up. Expect to see some very over the top, but fun action sequences, and don’t be surprised if there are a few moments that make you jump a bit. The movie also looks polished, which really kept me visually engaged. Since I found the plot a bit lacking, it was nice to have a very sharp, pretty looking movie to help keep my attention and focus.

RESIDENT EVIL: RETRIBUTION is an acceptable addition to the Resident Evil movies. While it doesn’t really bring anything new to the table or take things back towards the video games, it certainly keeps in line with the monsters and action tradition of the earlier films, brining in new monsters and some old and new faces from the video game and movie franchises. If you are a fan of the other Resident Evil movies, particularly the previous two, then head on out to the theatre and grab some popcorn, because this movie is right up your alley; however, if you haven’t seen any of the other movies or are a fan of the video games but not the films, you may want to think twice before venturing out for this one.