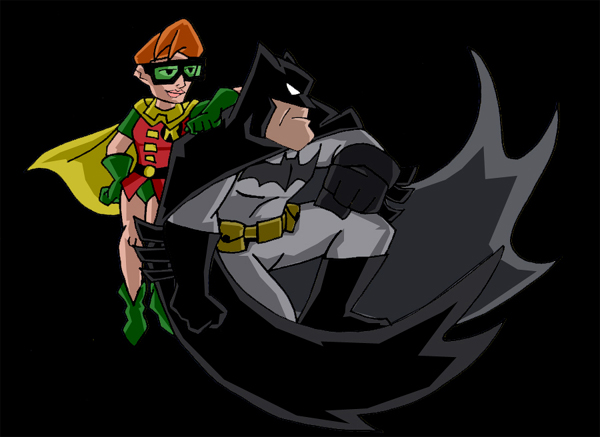 Much like Alan Moore’s WATCHMEN, Frank Miller’s BATMAN: THE DARK KNIGHT RETURNS is often considered to be one of the more influential and revolutionary graphic novels to come out of the 1980’s.  Also, like WATCHMEN, it was considered by its fanbase to be one of those comics: perfect as is and next to impossible to adapt into any other medium without sacrificing the integrity of the original product.  Thankfully, BATMAN: THE DARK KNIGHT RETURNS PART 1, a direct-to-DVD/Blu-Ray feature, appears to not only be a faithful adaptation of Miller’s work, but it’s a damn fun Batman movie.  Period.

For starters, being the first part of an animated feature has its advantages.  THE DARK KNIGHT RETURNS is a sweeping story that touches upon all aspects of the Batman’s history, personality and supporting cast.  To condense the entire journey into one film would not do it proper justice.  Splitting the narrative into two 75 minute movies gives the many subplots a chance to breathe and truly give us a sense of the world that these events take place in.  The graphic novel also had a style and delivery all its own that a live action interpretation could never properly represent.  In this feature, character designs are almost the spitting image of their comic book counterparts, the atmosphere of a media-saturated Gotham City is always present and some of the book’s inner monologues are incorporated at appropriate times throughout the film as part of the speaking script, providing just the right amount of colorful description needed to make the film’s point of view uniquely Batman’s.  Not only that, but director Jay Oliva (a storyboard artist for Zack Snyder’s upcoming MAN OF STEEL) seems to have taken a page out of Robert Rodriguez’s SIN CITY playbook and translated pages from the comic straight to the screen, right down to the iconic cover from the first issue (seen below). 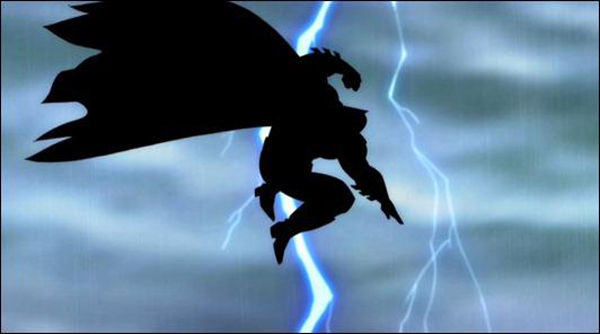 Secondly, the voice cast is superb in their respective roles.  Peter Weller (ROBOCOP) has the chops to portray a tough and intimidating elderly Bruce Wayne/Batman, but also just enough weathered tone in his voice to make the Caped Crusader sound weary and almost worn-out by his role as Gotham’s protector.  Ariel Winter (MODERN FAMILY) provides the necessary spunk and enthusiasm required for Carrie Kelly a.k.a. Robin.  David Selby (FALCON CREST) conveys an almost fatherly and knowing demeanor in his role as Batman’s confidant Commissioner Gordon.  And Michael McKean (THIS IS SPINAL TAP) oozes with just the right amount of false charm and bravado needed for Pop psychologist Dr. Bartholomew Wolper, who is in opposition to Batman’s resurfacing and his alleged negative psychosocial impact on Gotham’s mental well-being.

Third, don’t be fooled by the fact that this is an animated feature.  It is a brutal and gritty film.  The settings are dark and dirty.  The action is bloody and fast-paced.  And the overall tone seems to capture the cultural pulse Miller had his fingers on when he wrote the original story.  Pimps, punks, politics and bone-breaking punches abound.  It feels like a dark 80’s action-thriller complete with a musical score that emulates the style of John Carpenter’s infamous themes from movies such as HALLOWEEN or BIG TROUBLE IN LITTLE CHINA mixed with a touch of Vangelis’ BLADE RUNNER soundtrack and the epic musical cues that we know Batman movies to carry within them. 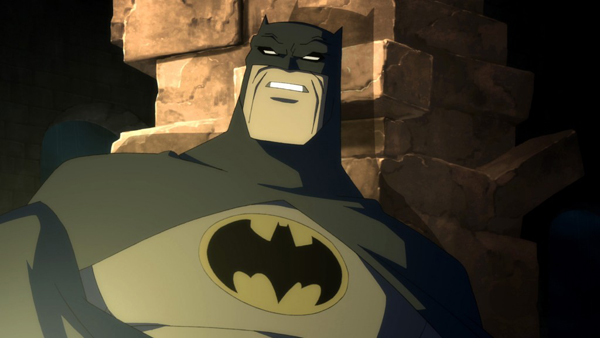 Through and through, THE DARK KNIGHT RETURNS PART 1 is an entertaining ride that pays loving tribute to its source material while still delivering plenty on the action and suspense.  And it ends on a cliffhanger that only helps to build up anticipation for the final installment in 2013.  As any diehard RETURNS fan knows the action, drama and conflicts only get bigger and better as the story continues.  Based off of the first part of this animated adaptation from DC Universe Animated Original Movies (JUSTICE LEAGUE: THE NEW FRONTIER, BATMAN: UNDER THE RED HOOD), we can expect nothing short of solid action, powerful vocal performances and Miller’s artwork brought to visceral life to give Batman’s biggest and final adventure the royal treatment.

BATMAN: THE DARK KNIGHT RETURNS PART 1 is currently available for download on iTunes with a DVD/BluRay release on September 25, 2012.