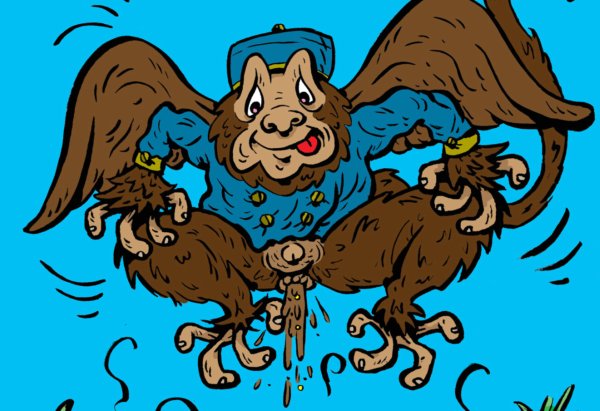 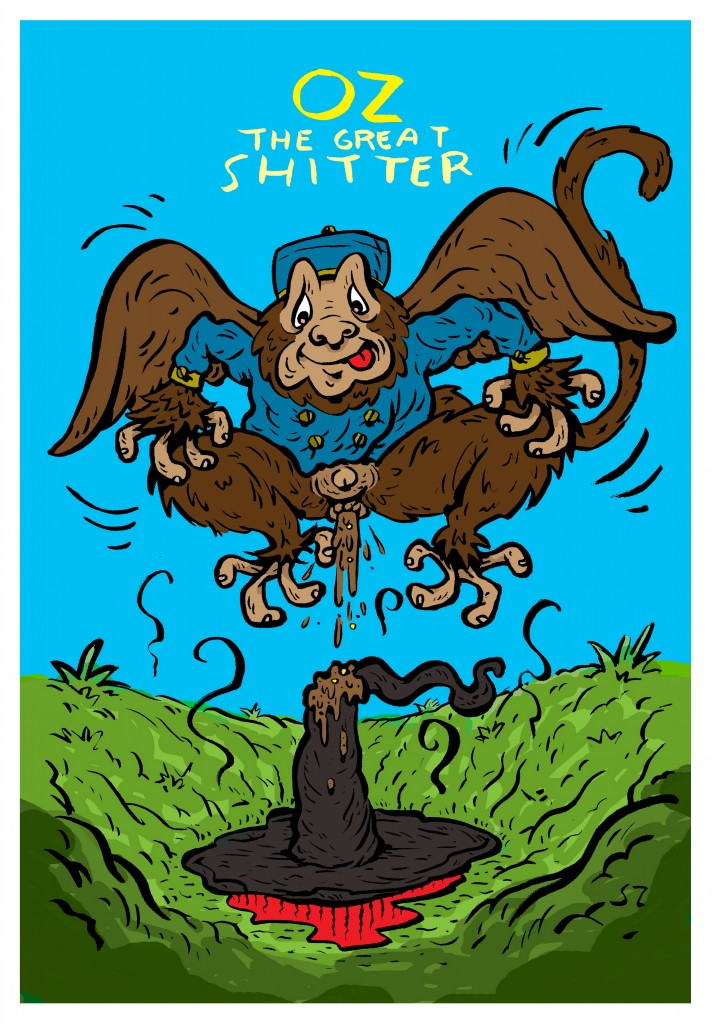 Dreams are tricky. One second you’re flying over a burning orgasm city while a giant space whale is chasing you down. The next minute, you’re back in high school and you’re one class away from graduating. When you sit down and really think about it, your dreams are trying to tell you something. ‘Maybe you need to rethink going on that second date with the person who smelled like formaldehyde.’ ‘You should really call your mother.’ ‘You might be unhappy at your job.’ ‘It’s probably just a bladder infection.’ There’s some real shit going on in the back of your head and that shit is fucking complex. Because, you know what, you’re the purple giraffe and the African Serengeti is your fear of commitment.

I really enjoyed the original WIZARD OF OZ. It was TOTAL RECALL, 60 years before there was a TOTAL RECALL. Dorothy is a teenager trying to figure her life out in a magical world that may or may not be real. But, the lessons she learns along the yellow brick road are real enough.  Life is tough. Life is complicated.  Life is Kansas. Life is brutal and sometimes we doubt ourselves. ‘Am I smart enough?’ ‘Am I brave enough?’  ‘Will I ever really know love?’

Not only was the original WIZARD OF OZ beautiful, but it eloquently represented the complexities of the human spirit. Dorothy goes on this buck wild adventure with characters who clearly represent aspects of her own personality. Characters who all suffer from the sames fears and doubts that we all suffer from. These magical beings also bare an uncanny resemblance to people in her own life. Was Dorothy’s adventure in Oz an actual situation or just the fevered dream of her unconscious mind trying to coop with the traumatic experience of watching a tornado rip apart of home?  And did the tornado represent the troubling transition from childhood to adult hood?  (No, I’m not talking about menstruation.)  Yes, you can easily say that the film is an allegory for the radically changing America of the 1930s. A world devastated by a stock market crash and the bankruptcy of the federal government. Sure, you could say .. but, then you would be an asshole. 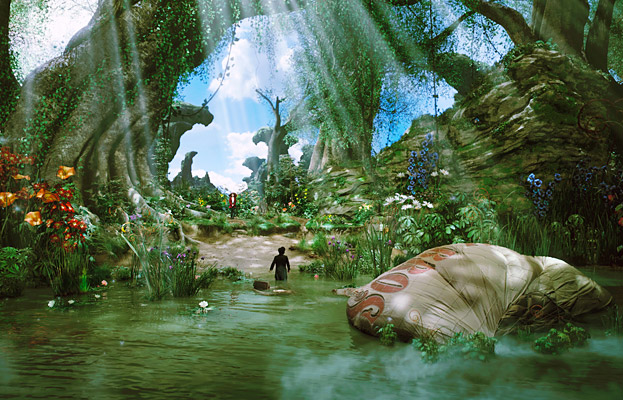 OZ THE GREAT AND POWERFUL tells the tale of a two-bit dust bowl magician in Kansas named Oz, played by James Franco (RISE OF THE PLANET OF THE APES) who wants to be more than a two-bit dust bowl magician in Kansas.  He longs for fame and great power, but seems to want none of the responsibility and hard work.  Women are nothing more than conquest and audiences simply pay the bills.  You’re suppose to believe that Oz has the potential for greatness but is drowning in his own poor self image. Through a portal that resembles a familiar looking tornado, Oz finds himself free of his black and white world (filmed in the old standard 1.33 Academy ratio) and now in the magical technicolor dream world of Oz. There, he meets three witches and successfully seduces two of them. We meet the sad and inexperienced witch Theodora, played by Mila Kunis  (TED), as well as her sister, the seemly wicked witch  from the East, Evanora, played Rachel Weisz (THE MUMMY).  They tell Oz that there is a prophecy that predicted he would come to Oz and rescue them from the ‘wicked witch’ who they fool him into believing is Glinda, who is actually the Good Witch, played by Michelle Williams (SHUTTER ISLAND).  Oz sets out on the quest to free the land of Oz from the real darkness that corrupts it and attempts to become the wizard they didn’t necessary expect, but the one they actually needed.

Like in the original WIZARD OF OZ, this new Oz is also an allegorical land that represents all the challenges that the main character must overcome in their own real lives. A place where their insecurities and doubts take physical form and presents opportunities for them to redeem themselves. There’s a scene where a China Town is destroyed by the evil witch and Oz discovers a small china doll girl with broken legs. It basically punches you in the face that this little girl represents the same little girl who attended his show in Kansas and begged the two bit magician to heal her really real broken legs. Unable to tell her that he’s ‘not that type of wizard,’ he gets the chance to in Oz.   But, this begs the question, is Oz the wizard’s dream world or Dorothy’s?  The beauty of the original film was the uncertainty of knowing if this world was real or a creation of Dorothy’s imagination. Having this new land of Oz once again lay out personalized obstacles and familiar characters that are clear manifestations of the actual people and failures in Oz’s life, seems to somewhat take away from the magic of the original film. 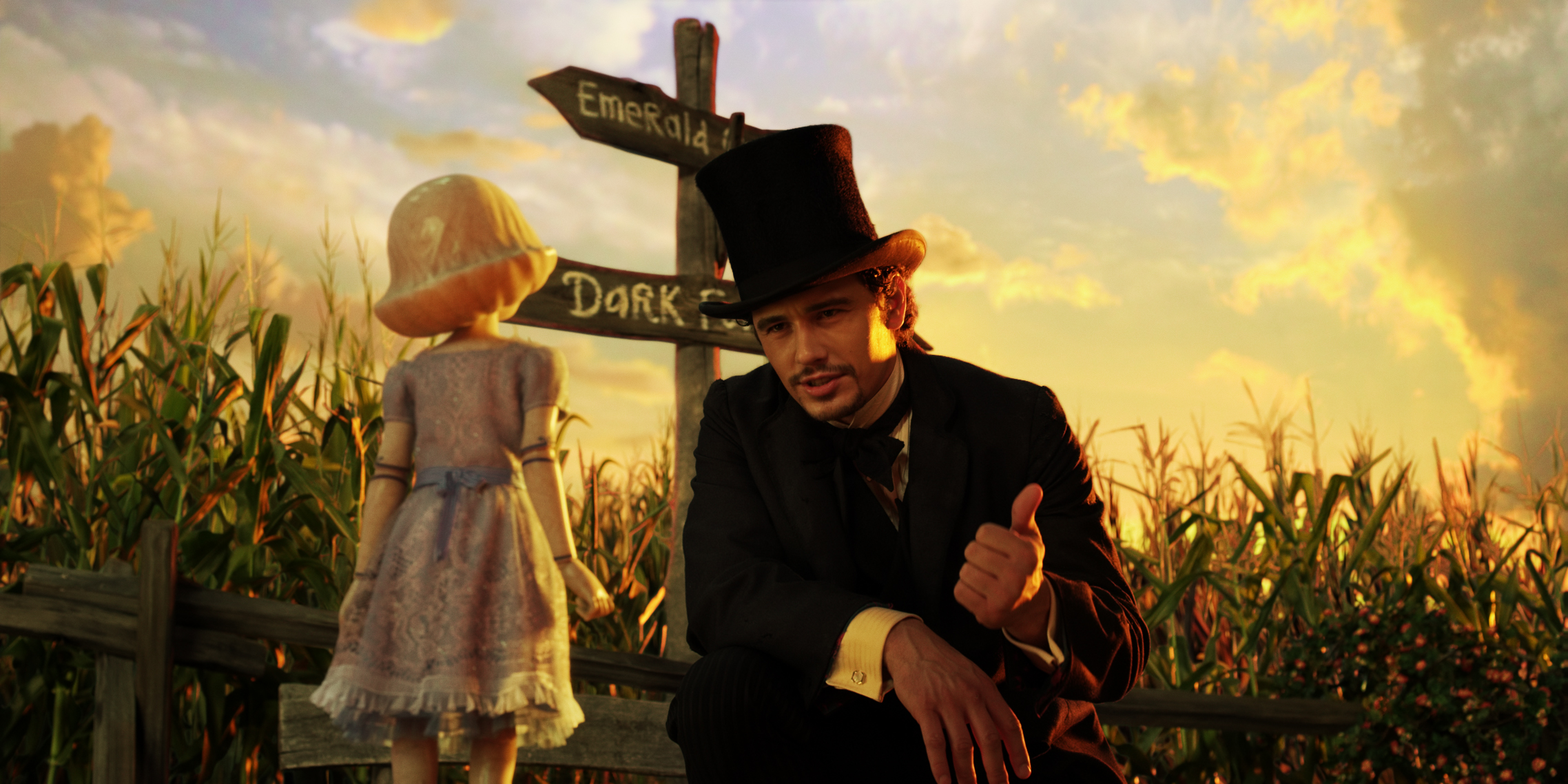 Despite all my petty grievances with this film, I actually really did enjoy it. You should see this film if you’re in a good mood and want to stay in a good mood. The journey is fun and its great and powerful watching Dorothy’s world of Oz get set up so seamlessly.  I guess my only problem with this film is that you never really connect with this wizard. I found myself so happy to be back in Oz, but so sad to find myself  following this poor excuse of a wizard.  I can understand that you are meant to see that he has the potential to be a great man (Odysseus) and that his own self doubt makes him come across as a troubled, unlikable man. But, he breaks Theodora’s heart in he first 15 minutes and basically deserves all the shit that he gets dealt. (Seriously, I think he takes her virginity and immediately abandons her.) I guess, seeing the truly negative effect he has on her is the rude awakening he truly needed to see. You can’t just seduce ladies and break their hearts and not expect a few fire balls shoved up your ass. While Dorothy was a likable character on a magical adventure, the wizard comes across as a piece of shit who gets more good than he deserves. Despite that though,  the film is beautiful and a must see for anyone who saw the original film. Glinda’s complete and total understanding of who Oz truly is, is a well deserved breath of fresh air in the film. The CGI is outstanding and seeing how the Wizard becomes the man behind the curtain is an extremely fun ride.   At times, you start to believe that everyone is Oz is a simpleton, but, you’re subtly convinced otherwise. The relationship with the witches is complex and Oz’s motley crew carry much of the weight of the film. Definitely worth the trip over the rainbow.

I really need to get this off my chest…Sam Raimi, I know that you directed ARMY OF DARKNESS and EVIL DEAD. It’s your thing. We get that. But, when you get tasked with creating the prequel to one of the most influential films of all time, you think you can maybe refrain from using extreme camera close ups and a witch attack that is directly from a scene from ARMY OF DARKNESS.  All director’s have their style, obviously, but when your style consist of the same camera shot and rape trees, maybe you’re not the best man for the job to direct a children’s film.  Also, Bruce Campbell is in the film for 20 seconds and somehow makes his way into the main credits. Really?
Final Score:  8 out of 10