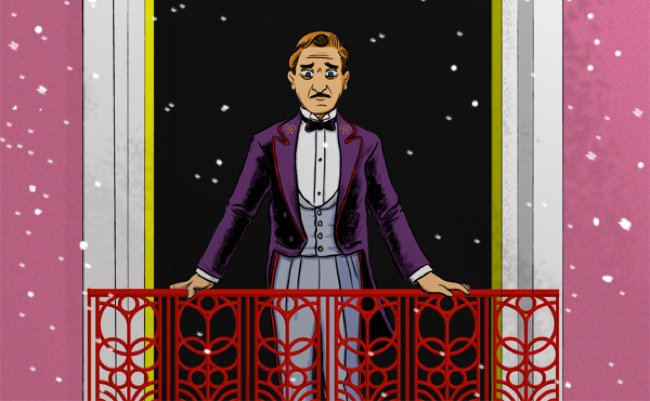 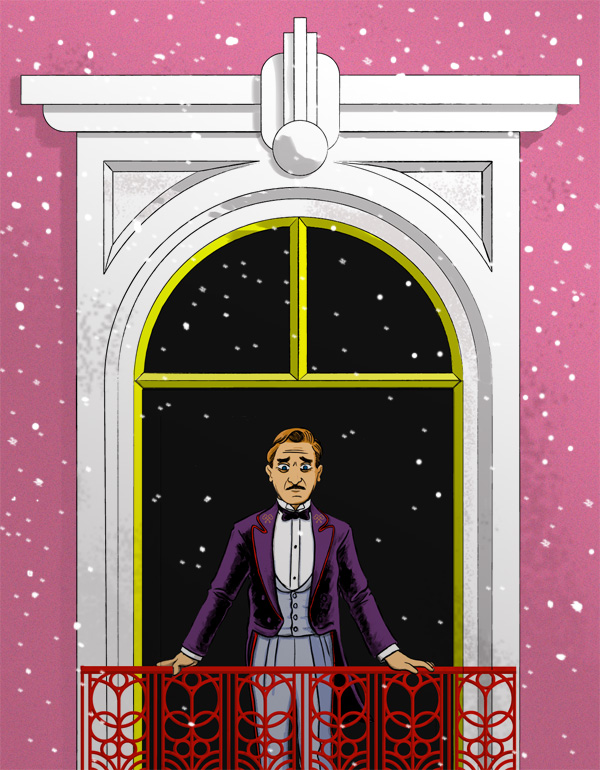 Writer/Director Wes Anderson (MOONRISE KINGDOM) may be one of the most divisive filmmakers working today. His films have a unique artistic visual aesthetic, and when you combine that with his wry comedic sense and typically outlandish storylines, you get a perfect combination for great cinema, as long as you understand it. THE GRAND BUDAPEST HOTEL is another wonderful work from this master auteur, and, like most of his other films, it will have critics and fans raving, and leave many outsiders scratching their heads in confusion. The movie focuses on M. Gustave, the concierge of the Grand Budapest Hotel, and Zero, his new lobby boy. Gustave runs the Grand Budapest with a keen eye for detail and a poet’s heart, and he retains a loyal clientele of wealthy elderly woman, all of whom he has wooed. Zero is the newest addition to the Grand Budapest staff and Gustave quickly takes him under his wing as in a fashion that is part friendship and part apprenticeship. When one of Gustave’s most loyal devotees, Madam D, dies suddenly under suspicious circumstances, and Gustave is seen as the primary suspect, he and Zero must contend with the police, convicts, the military, and the deceased’s vengeful son and his enforcers in order to clear Gustave’s name and claim a lucrative inheritance.

Like any true auteur, Wes Anderson uses some particular hallmarks in his films, and while they are blatantly present in THE GRAND BUDAPEST HOTEL, I don’t know if I’ve ever seen them used so effectively. Flashbacks and voice over narrations that are supposed to resemble novels are not uncommon features in Anderson films, and he combines them in a layered fashion this time around and, while it may sound confusing, it actually works rather well and allows the film to have a greater feeling of depth. Another key feature of Anderson’s films are the color schemes. He has a habit of using vivid colors, but using them in such a way as to still make everything seem somewhat drab and typical, even though his locales are usually far closer to the exotic. This wonderful use of color is clearly on display in Budapest, as there is an over abundance of pinks, blues, reds, and oranges, as well as other colors, but the use of a winter seasonal setting and the (supposedly) somber theme of murder and death combine to give the film its drab undertone. One of the things I love most about Wes Anderson films is his quirky camera style, and, as usual, it heightens the film and often makes it feel like you are in the film as opposed to merely watching it. Some of my favorite shots are his point of view shots, particularly from high vantage points, and his panning shots that he uses to capture the quick action of the characters, which makes it seem as if you were moving right along with them. Lastly, its become fairly common, particularly in his later films, for Anderson to use bits of stop motion animation in his pictures. There was a bit more of that than I expected in Grand Budapest, it was mostly used for exterior environmental shots, but it was used quite appropriately and added to the whimsical quality of the film. Its possible to trace Wes Anderson’s growth as a film maker merely by watching his films, and I believe that, from a production stand point, THE GRAND BUDAPEST HOTEL is his finest film to date.

What makes the stories in Wes Anderson films so great are the unique characters, so rather than delve deeper into the story, I’m going to focus on the principle characters and actors who made this movie so much fun. Ralph Fiennes (SKYFALL) filled the role of M. Gustave, and it was one of the best performances I’ve ever seen Fiennes deliver. Fiennes is probably most well known for playing dark characters, such as Lord Voldemort, the serial killer Francis Dolarhyde, and SS officer Amon Goeth, so it was quite a surprise to see him play a character who is the very epitome of politeness and charm. His timing and delivery are precise and heartfelt, with a slightly grandiose quality that makes him a commanding presence. Fiennes performance alone is worth the cost of admission, and I found myself enthralled and delighted every time Gustave was on screen, which was most of the film.

Zero, the subtle straight man to Gustave’s eccentricities, is played by Tony Revolori (THE PERFECT GAME) and he does quite a nice job with the role. Revolori easily captures Zero’s quite determination and also gradually instills the character with a higher level of confidence as the film progresses; he is every bit the outsider who knows that hard work is his ticket to success, and isn’t going to let an opportunity like being mentored go to waste. This was my first encounter with Revolori’s work, but I certainly hope to see more of him in the future, because he has an inner passion that deserves to shine. I was delighted to see Saoirse Ronan (THE HOST) in the role of Agatha, an employee at a local confectioner’s shop and love interest of Zero. As Agatha, Ronan plays a strong female character who’s presence is impossible to ignore, even though Agatha is rather on the quiet side, making it all the more impressive.

Adrien Brody (MIDNIGHT IN PARIS) takes on the role of Dmitri, the son of the Madam D, and its fun to see him play a more villainous role. While Brody doesn’t have a great deal of screen time, he oozes anger and entitlement when he does appear, making for a fun, but entertaining antagonist. Jopling, Dmitri’s ruthless enforcer, is played by Willem Dafoe (OUT OF THE FURNACE) and he’s deliciously evil. Dafoe brings out his dark side with Jopling, but he does so with little dialog, rather relying on an array of facial expression that, while almost always menacing, also skirt the border of comedic, giving the audience a truly enjoyable character.

Wes Anderson’s films always boast large casts, and while I would love to continue to gush over all the wonderful performances, I fear you would lose interest long before I finished, so I will simply do a quick run down of the wonderful actors you’ll get to see in the film: Jeff Goldblum (TV’s LAW AND ORDER: CRIMINAL INTENT), Edward Norton (THE BOURNE LEGACY), F Murray Abraham (TV’s HOMELAND), Mathieu Amalric (QUANTUM OF SOLACE), Harvey Keitel (MOONRISE KINGDOM), Jude Law (RISE OF THE GUARDIANS), Bill Murray (THE MONUMENTS MEN), Jason Schwartzman (SAVING MR. BANKS), Tilda Swinton (THE ZERO THEOREM), Tom Wilkinson (THE LONE RANGER), Owen Wilson (MIDNIGHT IN PARIS), and Waris Ahluwalia (I AM LOVE). THE GRAND BUDAPEST HOTEL features an absolutely fantastic cast and they all deliver notable performances, its truly a treat for any one who is a fan of acting.

Wes Anderson continues to create great films, and if anyone doubted that he could follow up MOONRISE KINGDOM with another movie that is just as wonderful but completely different, THE GRAND BUDAPEST HOTEL will certainly put them to rest. The film presents a fantastic smorgasbord of everything that makes Anderson’s films so great: top notch production with a unique visual style and camera work, a terrific story chock full of quirky characters, and amazing performances from some of the most brilliant, and often underrated, actors working today. If any of this sounds like your cup of tea, then head on out to your local theatre and give it a look, I think you’ll be glad you did.