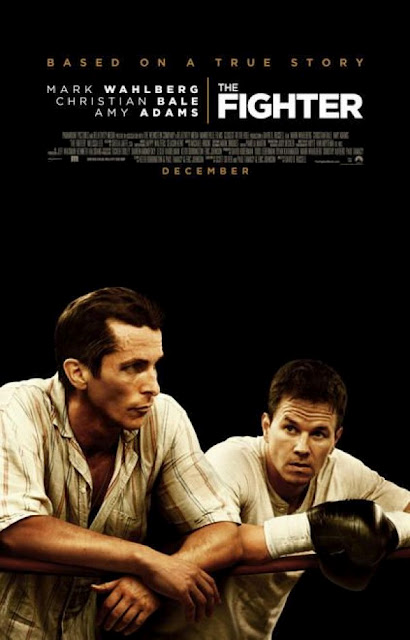 Wow! This is one powerful movie that simply caught me off guard. It’s based on the true story of boxer “Irish” Mickie Ward who has one last shot at a boxing title before it’s too late. THE FIGHTER comes to us by director David O. Russell (I HEART HUCKABEES, THREE KINGS) and stars Mark Wahlberg (BOOGIE NIGHTS, THE DEPARTED) as Mickie and co-stars Christian Bale (THE DARK KNIGHT, EQUILIBRIUM) as his half-brother Dickie who was a boxing hero who had a chance at a title shot but succumbed to a crack addiction and is stuck in the past frequently reliving his bout with Sugar Ray Leonard.

I have to say that Bale’s performance here is hands down the highlight of the film. When he is not reliving the past he is trying to train Mickie to become something he could not and his attitude and addictive personality often get him and his brother in trouble. This has to be Bale’s best role and is definitely a show stealer. I found this movie to be more about the relationship between Mickie and his family and the struggles and hurdles he has to overcome to achieve his dream of winning a title. The relationship he has with his half-brother is the focal point of this story for me and we watch as Mickie discovers how to balance the true love he has for his family and his passion for obtaining his dreams. This is really a great film to watch with your family especially if you have a brother. Powerful stuff.

The movie is shot much like a documentary even though we have some huge climatic scenes in the boxing ring and at home. The tone is so grounded in reality it almost feels like you are living in this film and I sensed that I actually knew these people. The sense of immersion and care I had for this story and these characters is unmatched in recent memory. I was so nervous for these characters and so moved by their actions that I found myself near tears often and even broke down a bit in the films final moments. The supporting cast besides Bale is just fantastic. Everyone from Mickie’s Mother played by Melissa Leo (FROZEN RIVER, TREME), his tough as nails girlfriend played by Amy Adams (ENCHANTED, JULIE & JULIA), his two father figures, and his armada of crazy sisters created some truly awesome drama that I genuinely cared about. This family redefines dysfunctional yet they have the ability to allow their love for one another to shine through it all. I don’t want to spoil anything about this movie. I just want you to do yourself a favor and check it out for yourself. This is a great story with inspiring characters in a very real setting that will have you cheering and crying by the end credits. Highly recommended.