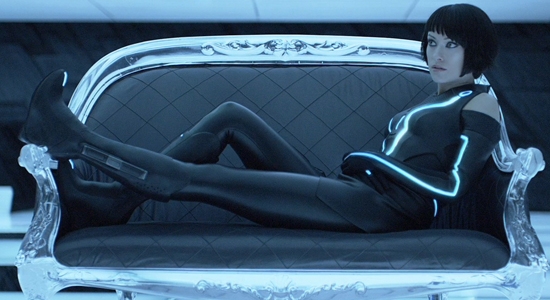 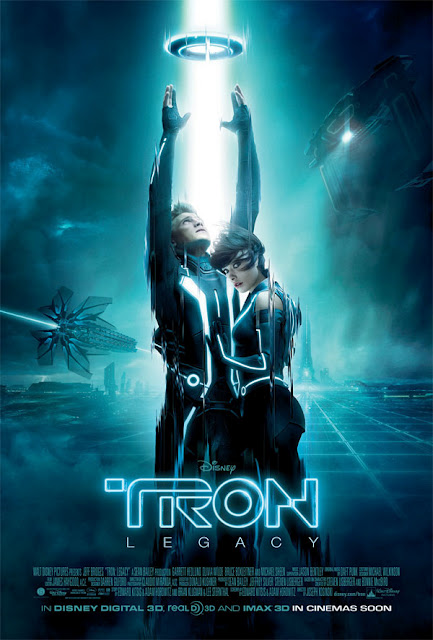 After nearly 30 years Disney has decided to make a sequel to the 1982 classic TRON rather than a complete “reboot” and I think that was a wise and bold move on their part. I am a huge fan of the original Sci-fi classic and seeing an actual sequel is a nerd dream come true. I highly recommend watching the first TRON if you missed it or if it is not fresh in your mind. TRON: LEGACY comes to us by newcomer Joseph Kosinski in his directorial debut and he is now on my list of directors to keep an eye on because what he has crafted here is one amazing film.

Jeff Bridges returns as ENCOM CEO Kevin Flynn who created the program that he is now stuck in. Interestingly enough Bridges also plays the villain named CLU who is an avatar created by Flynn to help maintain the program from within. CLU has become corrupt and thirsts for control, knowledge, and power while Flynn is is seclusion trying desperately to protect the secrets of his program. It is pretty fantastic having Bridges as our hero AND villain. CLU has never aged and still looks as young as Bridges did in 1982 and the special effects and motion capture techniques used to portray that is pretty great. Some will complain of the “plastic” look of it all, but I say it only aids the character seeing how he IS fake and IS just a program. While it’s great to see Kevin Flynn back in action, our main hero is his underachieving son Sam Flynn, played by Garrett Hedlund (TROY, FOUR BROTHERS), who gets thrust into the world of TRON while following clues his father left behind. The acting of both is well done and the supporting cast is pretty great as well including the talented up-and-comer Olivia Wilde (ALPHA DOG, THE BLACK DONNELLYS) and the charismatic Michael Sheen (UNDERWORLD SERIES, TWILIGHT SAGA) in a brief but amazing appearance as a club owner with important information who bares a striking resemblance to Ziggy Stardust.

The visuals in this film are simply a feast for the eyes and I could not get enough of the style and feel of this film. It is just so cool to see all the neon colors blast off the screen and the director really captured a desolate yet appealing world for us to live in for a few hours. This stuff is just so cool people! The visuals are complimented greatly by the fantastic soundtrack by Daft Punk. The mix is just astounding and so perfect. I constantly found myself thinking how appropriate the sound and music was in relation to the action on screen. From the opening scene to the credits there really is never a dull moment in this movie. While it will not win any awards for storytelling, it was just such a fun ride and I admit it had its fair share of heartwarming moments. I especially like the father and son dynamic and the relationship between Kevin Flynn and his self created nemesis CLU. And this just would not be a TRON movie without some bad ass action scenes and we definitely get that. We don’t just get a rehash of the “games” from the first movie seeing how all of that is revisited in the first half of the movie. Revisiting the “games” with the newer special effects technology of today was just a treat. Once we see some classic TRON “games” played in all of there bad ass glory we are left with plenty of room for new and interesting adventures in the TRON universe. This time around we really get to delve into the world and politics of TRON and it is quite captivating.

All in all this is a well directed film that is good fun, has some amazing visuals, kick ass action scenes, a great soundtrack, and a wonderful cast. I highly recommend this one and hope you have as much fun as I did.