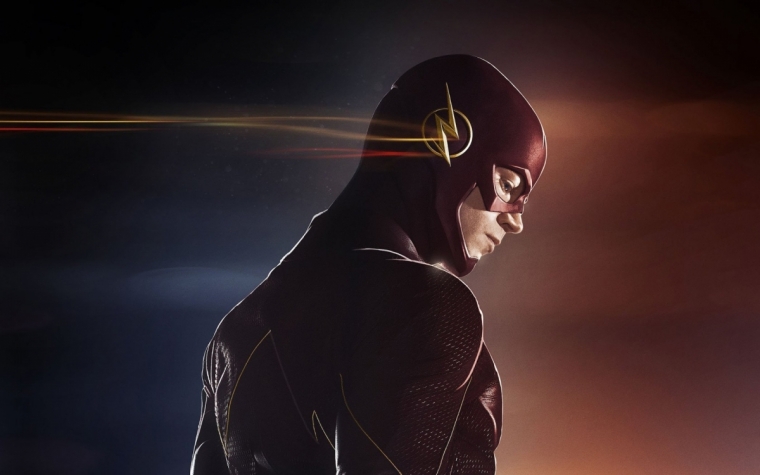 In one of the closing scenes of this premiere episode, Professor Stein, one half of the combustible superhero Firestorm, makes a toast to one simple concept: forward.  Moving forward past tragedy and change and on towards destiny.  This is the promise that THE FLASH held to in its debut season and after resetting the board, establishing a season’s worth of mysteries and putting speedster Barry Allen through an emotional boxing match, this is the reinforced mission statement that the show hits the ground running with in its 2nd season…while still delivering plenty of action, drama and wackiness that we have come to expect from a superhero primetime show that fully embraces its outlandish roots.

6 months have passed since the singularity (caused by Eddie Thawne’s death and the ceased existence of his descendant Harrison Wells/Eobard Thawne/Reverse Flash) almost wiped out Central City and, possibly, reality as we know it.  The police are better prepared to handle metahuman criminals thanks to the efforts of S.T.A.R. Labs’ Cisco Roman and Detective Joe West and the populace is practically worshipping the Flash and offering him a key to the city.  But Barry is far from happy.  Haunted by his perceived failure to save Eddie and another friend from the singularity, the scarlet speedster now operates alone, reluctant to put anymore of his loved ones in danger.  He also shies away from wanting to present himself to the world as a flesh and blood hero to be revered.  But the universe clearly has other plans as the radiation-sucking, size-changing assassin Atom Smasher faces off against the Flash at every turn and the last wishes and revelations of the late Harrison Wells rock Barry’s world to his core.

Exploring Barry being more of a “lone wolf” and isolated hero is intriguing, but I felt that it was handled and resolved within the episode very well.  Exploring the darker side of a main character on, say, ARROW may be engaging enough to span several episodes in a story arc.  But with THE FLASH being a little more optimistic and adventurous in its tone, it makes sense that it would quickly return to “business as usual.”  While harboring his fair share of tragedy, Barry Allen isn’t a brooding loner and draws strength and inspiration from his family and friends.  It is a lesson that they don’t let him forget and it is very enjoyable to see how at ease and familial all the cast members are with each other by now.  One such example is a brief scene between Barry and his father (original TV Flash John Wesley Shipp).  Even though it is basically a scene meant to close out their relationship and write his dad out of the series, it still packs an emotional punch.

But don’t worry ’cause it ain’t all tears and hugs in Central City!  Atom Smasher cryptically alludes to the fact that his little “Flash hunt” is at the behest of a mysterious figure who is shaping up to possibly be the season’s big bad: Zoom.  There are still plenty of Flash Rogues and dangerous metahumans on the loose for Barry and the S.T.A.R. Labs team to take down.  More allies and enemies are waiting in the wings such as Jesse Quick, Vandal Savage and even Hawkman.  And the end-stinger reveal of a certain Golden Age hero from a parallel world warning of universal danger is sure to give the fastest man alive a run for his money.

Throughout it all, THE FLASH maintains its near-perfect balance of action, drama and levity.  It’s clear another world-shattering endgame is being planned out well for the next several months of television, the effects are still at the top of their game for a modest TV budget, the acting keeps its blend of CW-sanctioned melodrama and believability going strong to make this “comic brought to life” attention-grabbing and, as per the course with this show, the tease in the last 30 seconds of the episode will have you waiting impatiently for next week’s installment!

But admit it, you wouldn’t have it any other way.  In a television landscape where shows struggle to validate their relevancy (HEROES REBORN) or even try to figure out a course trajectory (GOTHAM), it’s comforting that there is a superhero series on the air that knows full well what it is, embraces it wholeheartedly and goes way out of its way to entertain you with a weekly thrill.

Bottom line: THE FLASH is back, it’s fun and it keeps moving forward!