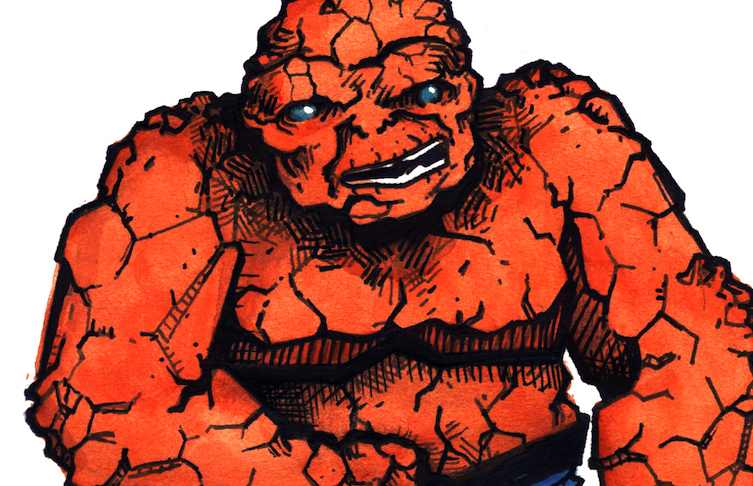 I apologize, but…I really don’t have any words left to say on this topic.  We were all suckered by false promises in fairly intriguing teasers and trailers that glimpsed a darker take, but still embraced the scientific explorative wonder and dynamic action of Stan Lee and Jack Kirby’s creation (it should have been telling that not even Stan showed up for his obligatory cameo).  What did we get instead?  Well…everything I found wrong, unimaginative and (most importantly) boring about the latest movie incarnation of FANTASTIC FOUR can be found here in my video log review of the film:

I know in the video I said right off the bat that writing a review for this movie would be a breeze.  How wrong was I?  I immediately regretted saying that as I continued going over everything that aggravated me in the viewing experience and ultimately realized that I didn’t want to revisit analyzing this movie in any way, shape or form.  Life’s too short and there are better and brighter things to look forward to in this world of superhero wonders (Spidey finally getting to join his Marvel movie buddies, the beginnings of the Justice League on the silver screen, Ryan Reynolds finally getting his proper Deadpool treatment).  I am proud to be part of a site that prides itself on being a little more optimistic and lenient on things when fandoms can be truly fickle and nit-picky about every little aspect of their beloved characters and stories.  But there is no working around this.  FANTASTIC FOUR was a really bad movie…and not even entertainingly bad like BATTLEFIELD EARTH, BATMAN & ROBIN or even director Tim Story’s previous attempts at the franchise.  Hell, I’d even go so far as to say that the un-released 1994 film produced by Roger Corman is superior to Josh Trank’s latest take on Marvel’s First Family.

Arrrgh…before I whip myself back into aggravation about how utterly unremarkable and depressing this movie was, let’s approach this topic from another angle, shall we?  Basically…what happened?  Who’s to blame for this monumental blunder in cinematic superhero storytelling?  The director?  The writers?  The studio?  I feel that the responsibility falls on everyone’s shoulders and that what should be taken away from this debacle is one simple message: learn to let go, 20th Century Fox.

First things first, I just want to say that the only people I feel who deserve the benefit of the doubt in this whole thing are the cast and crew as I’m sure they were just trying their best with what little guidance the head honchos and director were giving them in terms of vision.  Though there was some questionable CGI here and there, the effects (especially for the Thing and the Human Torch) were fairly solid.  It is a good-looking movie, but it’s just so underwhelming and bleak in scope and tone that nothing about it particularly screams “fantastic.”  And the principal cast definitely deserves better.  Miles Teller, Kate Mara, Michael B. Jordan and Jamie Bell are very talented actors who could still do the characters justice if cast in a real Fantastic Four movie and not just Fox’s movie rights placeholder.

Yup.  Getting right to the heart of it, I suppose.

Ultimately, the lion’s share of blame can be laid at the feet of the studio.  This was nothing more than a last-ditch effort to score some cash off of a flailing franchise that has never quite found its footing.  Despite being better received than this latest installment (and I believe doing better at the box office, as well), 2005’s FANTASTIC FOUR and its 2007 sequel RISE OF THE SILVER SURFER couldn’t quite capture the audience’s imagination in the same way Sam Raimi’s SPIDER-MAN films or even Fox’s own X-MEN properties could.  Sure, there was some heart, laughs and moments of genuine excitement placed throughout (the first time Chris Evans as Johnny Storm “flames on” and rockets through the night sky comes to mind), but it just never felt like enough to sustain a developing franchise.  Why even bother continuing such a lackluster endeavor, especially in the shadow of Marvel Studios’ ambitious and seemingly unstoppable plan for their shared universe?  Basically: money.  If there’s even the slightest possibility that a single cent can be made, I wholeheartedly believe that Fox will bleed a promising idea dry until it is a husk.

Let me rephrase that: they will bleed an unfocused and promising idea dry.  Give Fox credit where credit is due, the X-MEN films have been a consistently profitable source of super heroics for them.  Sure, there have been a couple of Ratner-sized pot holes in the road, but the movie X-Men have been able to stay the course for 15 years thanks to one man’s vision: Bryan Singer.  In 2000, Fox took a chance on a little-known director who had received a taste of critical and commercial success with movies such as THE USUAL SUSPECTS and APT PUPIL.  It was a gamble that paid off as Singer’s first few X-adventures paved the way for what was to come, not just for movie mutantkind, but for the superhero movie genre in general.  A lot of franchises and reboots of franchises in recent years owe quite a bit to Mr. Singer and his X-Men.  Perhaps Fox felt the lightning would strike twice if they took a similar chance on the little-known director of the critical darling CHRONICLE for their poor unfortunate Fantastic Four.

Enter guilty party #2: director Josh Trank.  Having enjoyed CHORNICLE quite a bit, I wasn’t necessarily excited for Trank being assigned control of the new FF film, but I was very much intrigued.  I wondered if he would be able to bring some grit to the characters but still maintain the balance of awe and spectacle that he had so clearly demonstrated in his previous outing.  I wanted to believe in this idea he and the studio kept touting for a more science fiction-driven story that would capture our imaginations.  But now that the dust has settled and more accounts of what filming and production was like, I feel as though this gamble didn’t pay off in the end.  Whether stories of controlling the actors’ performances right down to when they blink, being an eccentric recluse in a tent or not having an actual ending prepared to shoot are true or not, I think it is safe to say that the responsibility of helming a rebooted FF movie may have been a little much for this novice director.  He certainly hasn’t been doing himself any favors with his now-infamous deleted tweet prior to the film’s release that basically bit the 20th Century hand that fed him (dude, at least wait until commentary time on the BluRay/DVD to vent).  Maybe the studio crippled his original vision, maybe not.  Regardless, it’s pretty clear now that there was really no leadership to be found on any front and the film greatly suffered due to that.

Which finally brings me back to my original plea to Fox: let the Fantastic Four go.  I know there is talk from the film’s producers that they want to move ahead with a sequel anyways and there are rumors surrounding consulting Singer about what it would take to make an FF/X-Men crossover possible, but just give it up already!  At this point, I feel the Fantastic Four need help from Marvel Studios à la Spider-Man, but in reality, it seems like the MCU is getting along fine without them.

But, deep down, here’s why I feel an FF movie outside of Marvel’s direct involvement will never work: they are, and always have been, placed dead center at Marvel’s heart.  Now, there are far more recognizable and popular characters that have inherited that mantle such as Spidey, Wolverine, Captain America and (in most recent years thanks to RDJ’s portrayal) Iron Man.  But everyone seems quick to forget that the Fantastic Four were the first pioneers in this ever-expanding community of comic book characters that Stan Lee, Jack Kirby, Steve Ditko and company started in the 60’s.  From the Human Torch’s rivalry/budding friendship with Spidey to the brain trust of Hank Pym, Tony Stark and Reed Richards they were the touchstone that all other Marvel characters could connect on.  Now, other characters such as Spider-Man and the X-Men have found their individual successes in film due mainly to having more isolated mythologies and stories that aren’t reliant on a larger universe to support them.  This is a path, for better or for worse, that the Fantastic Four I feel can no longer take.  Their image has become so reliant on the Marvel Universe being reliant on them (if that makes any sense).  To see one without the support of the other almost seems like sacrilege at this point.

That being said, I do really feel like giving the FF back to Marvel Studios would re-introduce a genuine passion for the property again.  Holding onto expiring movie rights would no longer be an issue and more focus could be placed on better storytelling and characterization rather than just solely being in it for the quick buck or letting your vision get derailed by studio big-wigs (as it may have been for Trank).  It’s clear that it is not blind luck that has been steering Marvel Studios since 2008.  They know what they are doing. They have a plan…a vision…in place and if you are willing to play ball, you can be a part of it and still get to be creative.  Fox’s X-Men are doing fine on their own.  Spider-Man may need a little help here and there, but Sony so far has been accepting of it.  The Fantastic Four are in desperate need of a vision.  And I sincerely hope they get it someday.