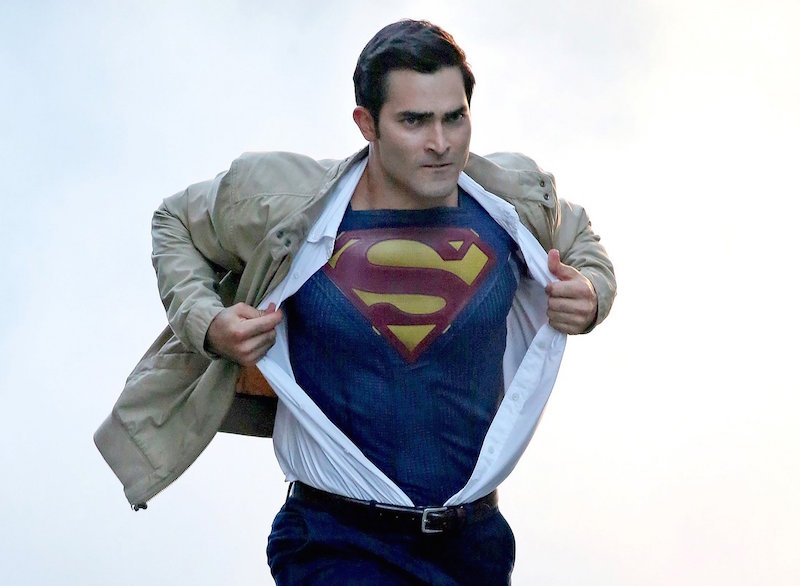 That one simple word spoken by Cat Grant (Calista Flockhart) in this new and improved season of SUPERGIRL says it all. She speaks of straying from the edge of something great, becoming the best version of yourself that there is, and that’s exactly what SUPERGIRL did on its new home The CW. My blood is still pumping from watching the premiere episode, but I think it’s safe to say that THAT was my favorite episode of SUPERGIRL by far, and I’ll take it a step further saying it was my favorite episode of any DC show on The CW. And I absolutely love ARROW, FLASH, and even the little brother LEGENDS OF TOMORROW. Welcome home SUPERGIRL.

Before I “dive” into my review for this premiere episode, please check out my review for SUPERGIRL season 1 which aired on CBS and is currently available on Netflix. There you can read what I thought of the first season including everything I loved and everything I thought needed some improvement. If it isn’t obvious yet, The CW just improved upon everything I asked for making this the show it was always meant to be.

Let’s start with the giant red and blue elephant in the room called Superman. Introducing a new Man of Steel in this premiere episode was a brilliant move. I know Supergirl can carry this show all by herself, but finally including Clark into the mix was so very necessary for us longtime fans. It just works. It’s just the way things are suppose to be. Actor Tyler Hoechlin slipped into this role perfectly not only giving us an amazing Superman, but a wonderfully convincing Clark Kent. He looks the part, he sounds the part, and I have absolutely no qualms having a TV version to go with my move version. They can co-exist just fine. His conversation with Perry White on the phone, his on-purpose and accidental fumbling, his interactions with Kara and Jimmy Olsen, his grump towards Martian Manhunter, his check-in chat with Lois, his iconic costume design, and his amazing action sequences (which still look great on The CW I might add) all culminated into an extremely joyous experience that I’ve always wanted to see on TV. I waited 10 years to see something like that on SMALLVILLE, and now I can rest easy knowing Clark is on The CW the way he was always meant to be. I’m grinning from ear to ear just thinking about it right now.

Alright enough gushing. This show is called SUPERGIRL after all. Let’s talk about her. Melissa Benoist is as great as ever as our titular hero even if she is stepping aside a bit for her cousin in this episode. She is still likable as all hell and gives a great performance. And besides Superman joining us, this show basically course-corrected itself in all the best ways possible. Kara’s position at Catco has shifted from lowly assistant to official reporter giving that element of the show a lot more potential. Her somewhat awkward relationship with Jimmy Olsen (Mehcad Brooks) got turned down a notch as they realized they work better in the “friend zone”. Agreed. Her pal Winn (Jeremy Jordan) is now officially working for the DEO rather than…wait…what the hell did he do at CatCo anyways? Kara’s sister Alex (Chyler Leigh) is still a great hero in the vein of Black Widow or Batman. Martian Manhunter is still around (phew) and he gets all grumpy with Superman because he is hoarding Kryptonite as a safeguard which Superman takes huge issue with. Intriguing dynamic right there! The introduction of Lena Luthor (Katie McGrath) adds a fun new character further tying in Superman’s world, and did you catch not one but TWO Batman references!? Knowing Lois and Clark are dating, knowing Lex is locked up in super-max for life, and knowing Clark is just a quick flight await at the Daily Planet working under Perry White gives this show a lot more cohesion in the bigger world. Oh, and a new familiar villain is on the horizon for Kara and Clark to battle.

Basically the name of the game here is course correction. SUPERGIRL is on track to be the show it was always meant to be. And I will be gushing about how great this new Superman/Clark Kent is for years to come. He’s great! No more awkward blurry shots and absolutely cringe-worthy text message conversations. I just loved watching all these characters shine together in one hell of a great episode of TV. The future is bright for SUPERGIRL and I have a feeling it may be some of the best DC on The CW we will get if this episode is any indication. I’m so glad SUPERGIRL finally took the “dive” and has become the show we all wanted from the get-go. Well done The CW. Welcome home SUPERGIRL.

If I’m this excited now, I can’t imagine how great things are going to be when Arrow, Flash, and the Legends show up. And those 2 Batman references can’t be just a tease. Nerd overload.