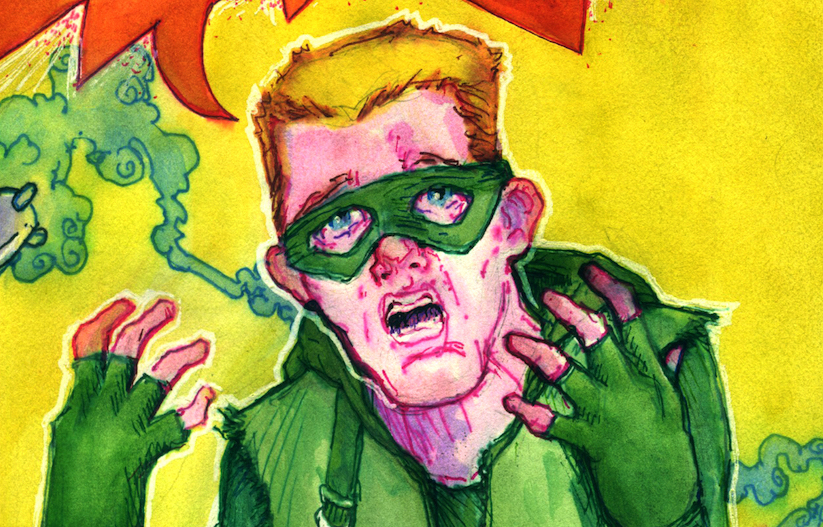 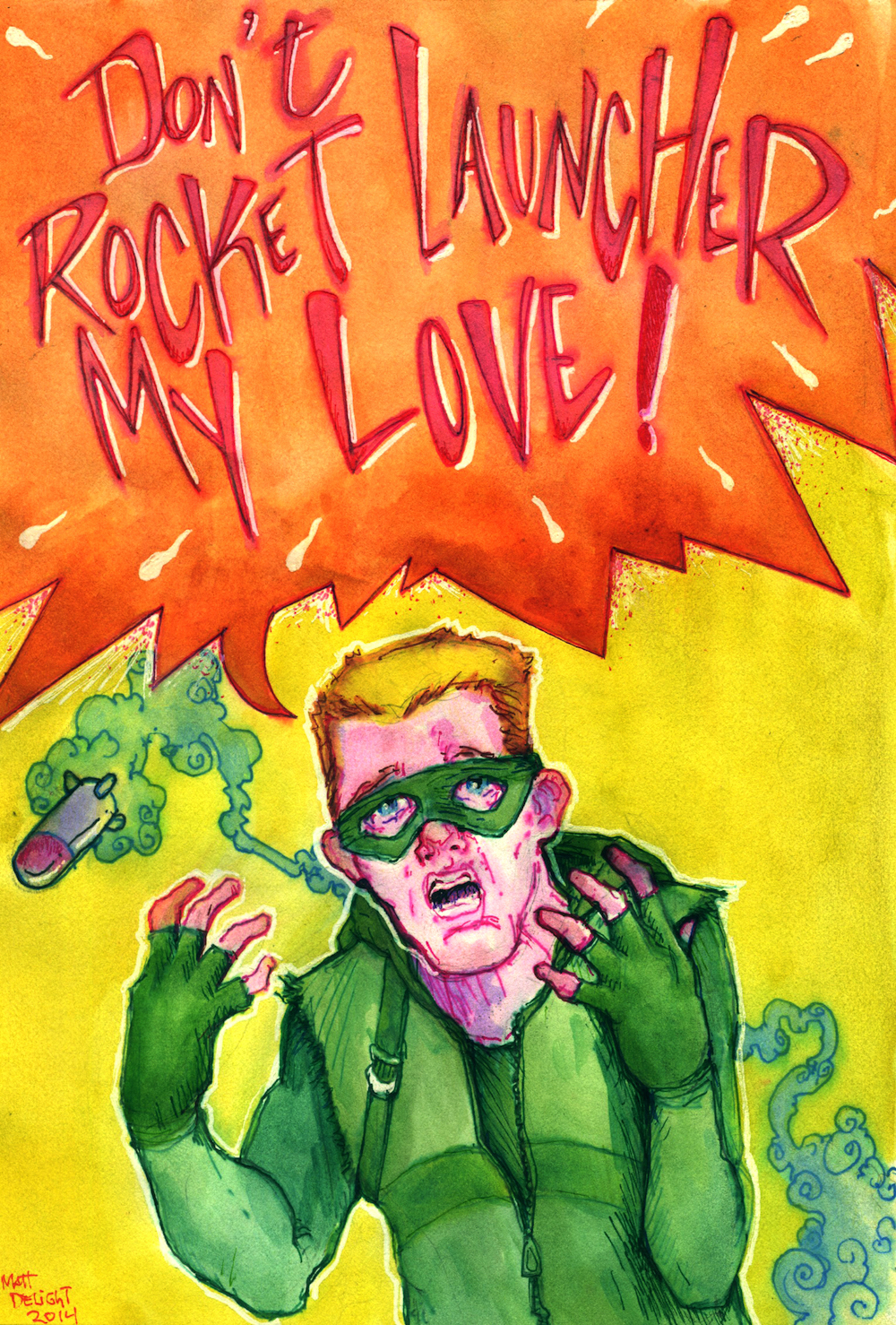 ARROW season 3
It’s tough being an original.
Perhaps what I mean to say, it’s tough being an innovator. ARROW Season 3 had some mighty big ambitions. They made some big plays, but didn’t always get the returns. So how did my least favorite season of my favorite show ever live up?
Pretty well, actually.

Of course, after the dizzying, continuous Amyl Nitrite capsule high which was Slade Wilson and Season 2, Season 3 almost seems bound to be a let down. Not that Team ARROW didn’t swing for the fences. It’s like 24 tons of super-justice story-line gets crammed into only 23 episodes. Be careful of spoilers if you haven’t watched, we’re about to real talk some television.

Just like every season before it, (all two of them) the season opener is nothing but big, classic, and a total hard rain of bananas. After beating back the horde of murdering Frankensteins in Season 2, The Arrow is lauded as an official hero of Starling City. While things for The Arrow seem to be going hot, things for his alter-ego Oliver Queen are not. Somehow, Mr. Queen loses the family business (Queen Consolidated) to wealthy industrialist/super-scientist Ray Palmer. Familiar villain Count Vertigo makes a Nolan-esque return (Real Scarecrow). Diggle, and his not wife have a baby. Because, babies, and maybe cuzz of the ending. The ending where main character Black Canary gets murdered with arrows. For those of you not watching the show, that would be like that scene in EMPIRE when Chewbacca and Cookie team-up, and then murder Lando with a bunch of arrows. It’s wild in the streets. However, what happens next is even Laura Ingalls Wilder.

Black Canary, along with her alter Sara Canary were heavily involved with the stars of Starling City. Her death opens up a serious vigilante vacuum that twists the Arrow-verse on its ear. The first-half of the season then becomes a type of ‘whodunnit’ mystery with more masks and fist-fights. Where episode by episode, Team Arrow slowly narrows down the possibilities of Sara’s killer. Meanwhile, Sara’s sister Laurel kinda loses her mind and becomes obsessed with her sisters death. Probably cuzz Sara died in her arms. Mid-season ends with Malcolm Merlyn (the villain of Season One) revealing the first part of his master plan to Oliver and Company. Laurel is seriously training to be the new Black Canary with former hero Ted Grant, aka Wildcat. A mysterious Ray Palmer digging into Queen Consolidated (now Palmer Technologies) weapon tech…known as O.M.A.C. Oh…and then Oliver Queen is stabbed with a sword by Ra’s al Ghul… then kicked off a mountain. That’s the first half.

Arrow is dead for a while. Like three episodes. No big. Next thing ya know, Laurel is in black leather and white wig, playing punch for punch with Eddie “Brick” Brickwell (played by Vinnie Jones). Ray Palmer is using his super-science, tech smarts and building himself an A.T.O.M.(or Iron Man) suit. Oh, and then Arrow comes back to life. And then Arrow becomes public enemy number uno. Arrow is hunted by police, gets offered the job of Ra’s al Ghul. Takes the job of Ra’s al Ghul. Head of the League of Assassins. Roy dies. Roy comes back to life. Felicity wears a robot suit. And just when it couldn’t get more crazy, Arrow retires to the country to plow plucky blond fields. And all the while…Merlyn. That Magician. It was a big, big season.

So, why does it feel like the other shoe never exactly drops?

I have a couple of fan theories on that. First, DC movie-verse has caused all sorts of devils for the Arrow-verse. Now, I am no Hollywood insider but there are rumors that certain DC movies, in particular Suicide Squad effected the Arrow line-up. It’s probably why Deadshot sacrifices himself in episode 17. Or why in a season that involves global terrorism we get surprisingly little A.R.G.U.S., and almost no Amanda Waller. That always struck me as odd, especially in the ‘flashback’ story which could have been boosted by her presence. Not that these are particular huge stumbling blocks to the season, but we are certainly no longer going to get Harley Quinn on the show. This leads me to Ray Palmer. I have a feeling that Ray Palmer was originally going to be a much more interesting, and complicated character. Possibly even a minor villain. There are a couple indicators that point to as such. Rumor has it the Ray Palmer was originally going to be Ted Kord (Blue Beetle), but apparently DC has some big plans for the character so ARROW could no longer use him. It may be why we saw Kord Industry signs at construction sites in the earlier seasons. Blue Beetle also being a more tech-savy/gadget heavy hero would also go a long way in explaining the ATOM suit.

So, imagine… Blue Beetle building a a futuristic battle-armor to avenge his dead wife, using the technology of two of Jack Kirbys more Orwellian characters (OMAC/Brother Eye), in the Arrow universe…before he was getting his own spin-off team show? How many scenes had him in cast in weird shadows or ominous light. Yeah, I think Ray Palmer was going to be way more interesting. Then there are things like, Wildcat. Wildcat was originally going to be Laurels love interest in the 2nd half of the season. Then the actor got a better job, and had to leave the show. So they hastily wrote him out of the script. I think that’s why he ends up getting punked like a bitch by Brick in episode 12. Any which way, we lost another costumed super-hero running around punching things.

Watching those hiccups ‘live’ did make the season seem a bit uneven at times. One couldn’t help notice that something was missing. However, upon re-watch (and of course I re-watched it) it is probably the most consistent of the seasons of the series. There is not one ‘clunker’ in the bunch. In my opinion, the most tedious episode of the this season is the Felicity Smoak episode…but, it’s the Felicity Smoak episode!!! So it’s still totally beyond rad! Then there are the crossover episodes!!! There is a FLASH/ARROW (FLARROW) crossover with Captain Boomerang that is so triple XXX, over-the-top amazing it will literally re-write the way you think about the word, ‘awesome’. And the whole time…Merlyn…that mad Magician.

Here’s a Fun Fact: All the Queens have been murdered at some point in there lives.

So yeah, it’s another super-big, super-fun season of my favorite Super-Hero Action/Adventure show of all time. Bring on number 4. HIVE mind.

I’ll totally explain that innovator thing next time round.