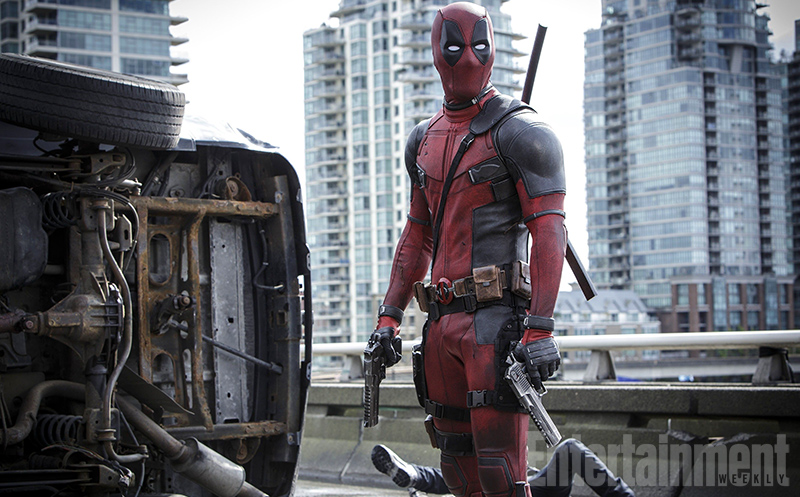 We don’t normally create posts from single images or screenshots from movies but this solid look (courtesy of EW) at Ryan Reynolds (or some stunt double) is just too cool not to share. I mean crap look at that image! The iconic red and black costume, the white eyes, the logo on the belt, the double handguns (!), Mr. Reynolds’ “Mr. McMoose knuckle”, and a damn flipped car! This is a big win for fans of this iconic Marvel (anti?) superhero. Let the hype machine begin!

The cherry on top is that Marvel has decided to give this film a hard R rating ensuring that they can be as true to the character as possible. No guts no glory right!?

And let’s all try and forget his appearance as Wade Wilson in X-MEN ORIGINS: WOLVERINE. Blech!! I will admit that Reynolds is the perfect choice for this character and I am glad to see him giving it a proper go this time around for a little old fashion redemption. Hopefully we will get the DEADPOOL movie we all want (deserve?)! But word on the street is that Mr. Reynolds is haunted by the “if you make a superhero movie it will kind of stink” ghost of Hollywood! Ohhhh, ahhhh! Don’t believe me? Watch BLADE TRINITY, X-MEN ORIGINS: WOLVERINE, and GREEN LANTERN. Yikes! I for one am rooting for the man, he is a likable actor, and he too deserves to be in a good comic adaptation.