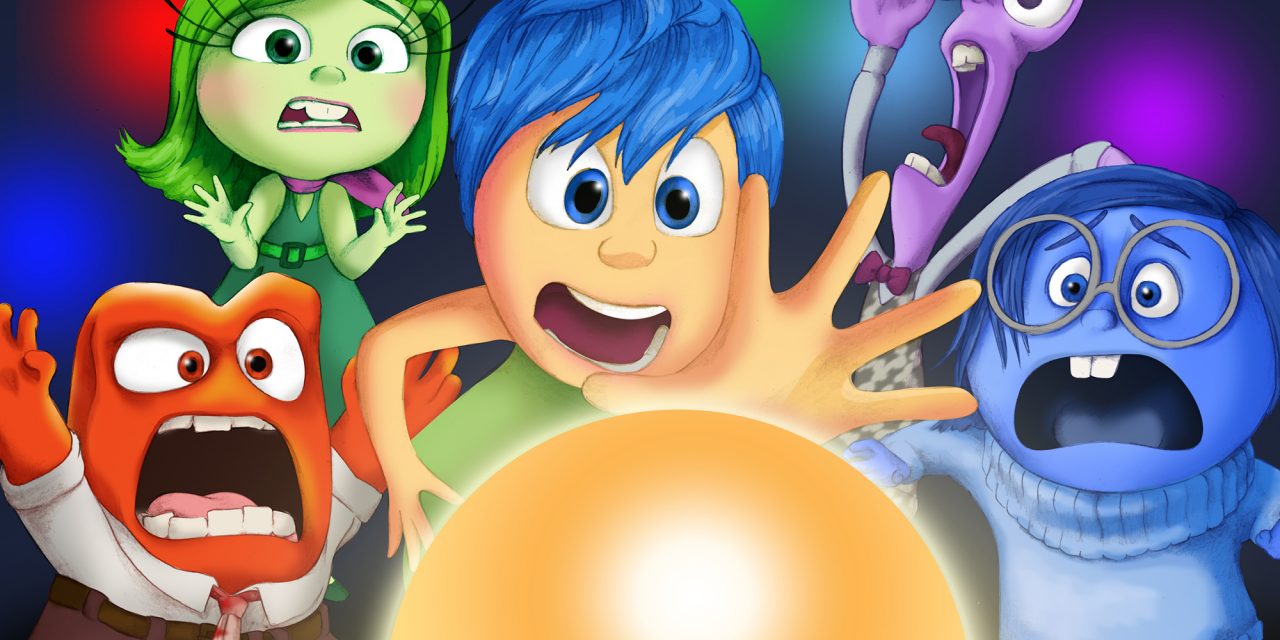 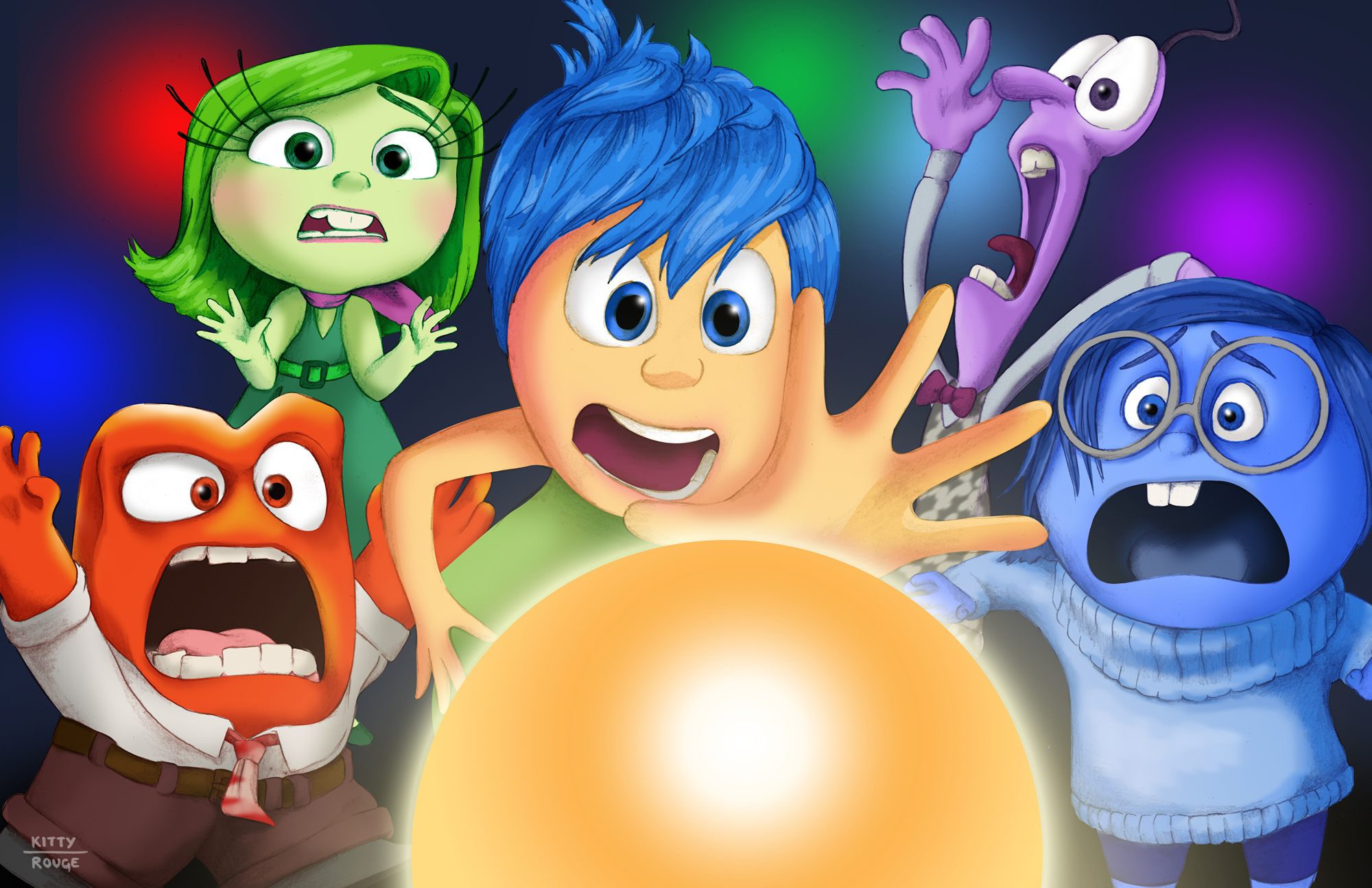 The DISNEY PIXAR team have given us some of the best original animated features of the last two decades, and while some of the sequels might give us trepidation, I’m looking at you MONSTERS UNIVERSITY, they have consistently delivered when delving into new original ideas, and this tradition continues with INSIDE OUT. Helmed by Pixar veteran Pete Docter (UP), Inside Out focuses on an 11 year old girl named Riley, and the inner workings of her mind as it is run by a combination of Joy, Sadness, Fear, Disgust, and Anger. Like many children, her childhood is highlighted by an abundance of Joy, but on the cusp of adolescence her parents make a major move across the country that disrupts her emotional stability. An inner conflict between Joy and Sadness results in both of them being sucked out of the command center and lost in the landscape of her long term memory. Now, as the values that make up Riley start to crumble from her being emotionally lost in her new environment with only Anger, Disgust, and Fear to try and straighten things out, Joy and Sadness must find a way to traverse the tumultuous landscape of her psyche to get back to central command and get Riley back to something resembling emotional stability.

Like most Pixar films, INSIDE OUT works on two different levels, on the one hand it plays out like a find your way home kid’s adventure movie, on the other hand it is a poignant look at the transition from blissful childhood into the murky shallows of adulthood. While the movie has all the necessary elements of a kid’s movie: relatable characters, cheap and accessible humor, colorful supporting characters that help the movie along and keep the mood light, it uses these elements to perfectly portray very real life events that almost any adult can relate to. This amazing blending speaks volumes for Pete Docter and Ronaldo Del Carmen, the primary creative team behind the film, because, as someone who was dragged halfway across the country when my family relocated when I was 11, I can say that this movie has done the best job I have ever seen of encapsulating the horrid emotional upheaval of being ripped away from the world you’ve come to know and love and being thrown into a strange new place where nothing seems right, but does so with such a gentle hand and humor that it comes off as fun and adventurous instead of painful and frightening.

Unsurprisingly, INSIDE OUT looks fantastic. Textures that look touchable, hair and clothes that react to the weather and the environment, and a plethora of locations, both real and imaginary, that all look very real and touchable are just some of the visual highlights from Pixar this time around. I also adore how the character design for the emotions effectively reflect those emotions, especially for Anger, Disgust, and Sadness. Their colors, mannerisms, and the way they carry themselves are perfect and easily bring to mind the emotions they represent, making them a visual treat that will keep your eyes glued to the screen. Additionally, the way they animated facial features and expressions across the board was remarkably impressive, as every character has a readable expression, even if it is something as simplistic as disinterest, they take the time to perfectly convey it.

Complimenting the gorgeous visuals in INSIDE OUT are a terrific group of voice actors. Amy Poehler (PARKS AND RECREATION)  lends her voice to Joy, the hyper-happy leader of young Riley’s emotions.  Poehler does a nice job with the part, easily infusing Joy with a bubbliness and single mindedness that makes her as fun as she is exhausting. Tackling the voice of Sadness is Phyllis Smith (THE OFFICE), and I was very impressed with her performance.  Smith keeps her voice at a timber that perfectly exudes sadness, even when she is excited about something, which speaks volumes for her verbal abilities and really takes the character to new heights.  Bing Bong, the over the top imaginary friend from Riley’s childhood, is voiced by Richard Kind (GOTHAM) who does a nice job with the role.  Bing Bong, being imaginary, is somewhat oblivious to much of reality, and Kind plays the character up as only he could.  Kind doesn’t have far to go to be bubbly, but Bing Bong actually runs a gamut of emotions throughout the film and he easily expresses them all while keeping himself sounding like he is on the edge of madness, which was quite fun.  The king of angry comedy, Lewis Black (THE DAILY SHOW) was type cast as, you guessed it, Anger.  Black is already a master of being angry and he turns his ranting voice into the personification of one of Riley’s most intense emotions.  Having watched his stand up, it comes as no surprise that he can sound annoyed even in the most mundane of circumstances, so while Black’s performance isn’t a stretch, it is certainly a blast to watch. Bringing us the voice of Disgust is Mindy Kaling (THIS IS THE END) and she is a treat to listen to. Kaling does a great job of voicing the disgusted, elitist snob we all wish we could be at times, seething with sarcasm and disdain, her vocal performance blends perfectly with Disgust’s physical appearance, giving us a character we won’t soon forget. Lastly, Bill Hader (BOB’S BURGERS) voices Fear, and while he does a decent job, the style felt like it left a little to be desired. Hader plays fear very over the top, and while that is certainly most people’s initial reaction, that doesn’t feel like the heart of fear. This could be a stylistic choice, as Riley is still young and so fear elicits an over reaction, but it came off a little too campy for my taste.

INSIDE OUT is a movie that will surprise you with how light hearted it feels while handling a rather serious topic: growing up. Thanks to the great cast, beautiful animation, and a great story, we get another masterpiece from Disney Pixar that will become yet another classic in their library. If you enjoy animated features, want a fun summer movie, or are looking for something to see with the whole family, then head on out to a theatre and see Inside Out, I’m certain you’ll be glad you did.