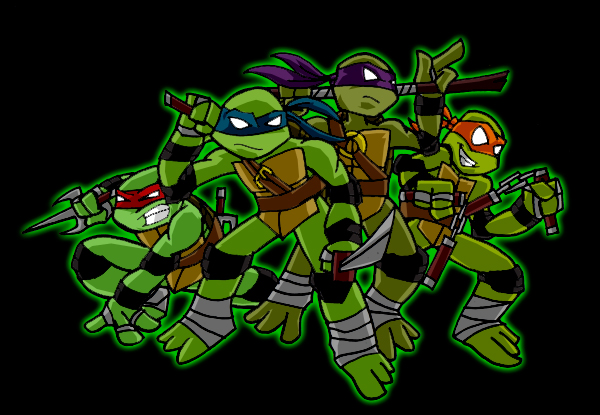 Since 1984, Kevin Eastman and Peter Laird’s Teenage Mutant Ninja Turtles have found popularity in comics, TV, movies, toys and video games.  Heck, they even had a Rock stage show, the COMING OUT OF THEIR SHELLS TOUR (and yes, I am ashamed to say that I own a copy of the album on cassette tape).  And speaking of Rock, the Turtles are essentially the superhero equivalent of Van Halen to many people my age: a gloriously fun phenomenon from our youth that has the ability to rekindle the kid in us when news of a new project hits.  Well, it looks as though the boys are back “in the studio” with a new animated series.  Nickelodeon’s TEENAGE MUTANT NINJA TURTLES is the latest incarnation of the Heroes in a Half-Shell and it contains plenty of slick animation, quirky jokes and kick-butt ninja action for younger viewers to latch onto while also providing its fair share of nostalgia for longtime TMNT fans.

Upon viewing the first trailer for the new series, I was a little skeptical of the show’s style and designs, particularly the use of more anime-inspired elements/expressions.  But upon viewing the 2-part premiere entitled “Rise of the Turtles,” everything works in context.  The speed and precision of the Turtles requires them to be more simplified and streamlined in their design.  You see the effectiveness of this hard at work within the first 3 minutes of the show during a fast-paced training session.  It brings a sense of brutality to the action in what is primarily a kid-friendly show (the animators used a variety of Martial Arts practitioners as physical references for their sequences).  The show also has a very dark and gritty color palette.  New York City is a gloomy metropolis straight out of the original run of Mirage Comics.  And for once, the Turtles look like individuals instead of interchangeable characters that you can only identify based on their bandana colors. 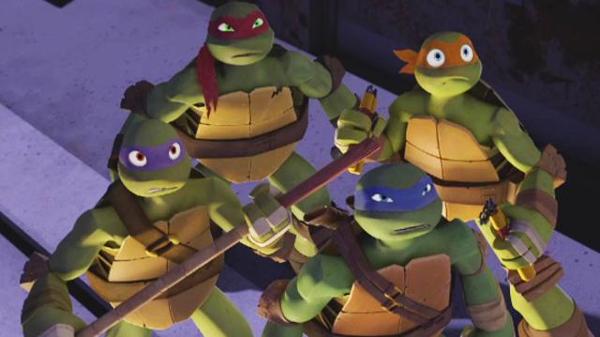 In terms of being compared to previous interpretations, it looks like the show creators took notes on what elements stuck the most in the mindset of the fan base and brought them together in a revitalized origin story.  Don’t worry, Michael Bay haters.  The Turtles themselves are spared the “alien” treatment, but alien influence is prominent with the introduction of a sinister group of extraterrestrials called the Kraang (an amalgamation of the villainous brain Krang from the 1987 cartoon and the species called Utroms from the original comic).  There promises to be plenty of frightening mutated villains for the Turtles to trade punches with.  In “Rise of the Turtles,” we’re introduced to one such nasty named Snakeweed, an insane plant monster that would make Poison Ivy from BATMAN: THE ANIMATED SERIES proud.  The show also drops hints throughout the 2-parter at the eventual “ultimate villain” reveal and full-on ninja confrontations to come, very similar to the pacing and storytelling techniques used in the current comic book series from IDW Publishing (which I highly recommend, by the way).

But where I’m won over is with the Turtles themselves.  The show seems to really get an aspect that other versions never addressed before in much detail: they’re teenagers.  You get a sense of their youth and inexperience due to living sheltered lives in the sewers.  The whole adventure kicks off after the guys have celebrated their 15th birthday, dubbed “Mutation Day,” and are finally given permission to visit the surface from their Master Splinter voiced by Hoon Lee (FRINGE).  It’s truly humorous and enjoyable to watch their young minds be overwhelmed by this unknown world and the many surprises it holds such as their first bite of pizza (which I’m sure will kick-off cross promotions with Domino’s in the near future) or, in the case of Donatello, his first crush on a 16-year-old April O’Neil voiced by Mae Whitman (SCOTT PILGRIM VS. THE WORLD).

The voice cast is very good at portraying this more youthful and naive version of the Turtles.  Jason Biggs (AMERICAN PIE) plays Leonardo as a confident yet anxious kid wanting to prove himself as a first-time leader and, frankly, a bit of a dork.  Speaking of dorks, resident genius and tech expert Donatello is brought to life by Rob Paulsen (ANIMANIACS) who, coincidentally, voiced Raphael in the 1987 Ninja Turtle cartoon.  Sean Astin (the LORD OF THE RINGS Trilogy) takes over the reins from Paulsen and brings attitude, toughness and a little bit of ignorance to the team’s resident hothead Raphael.  And Greg Cipes (TEEN TITANS) gives a boundless amount of humor and enthusiasm to his performance as the ninja prankster and “party dude” Michelangelo.  You’re convinced that not only are these guys brothers, but that they are kids figuring things out for themselves in a brand new world and slowly turning into the lean, green fighting machine we know and love.

TEENAGE MUTANT NINJA TURTLES contains plenty of appealing animation, moments and characters that both younger viewers and diehard Turtle fans can enjoy.  It mixes the best aspects of humor, action, sci-fi fantasy and teenage angst you expect Turtle Power to deliver while still making it fresh and new.  Plus, they’ve brought back that damn catchy 1987 theme song (with a few modern tweaks)!  Cowabunga!

See Mike’s McGTV review of the lackluster 90’s series NINJA TURTLES: THE NEXT MUTATION below.  CAUTION- may contain explicit language: