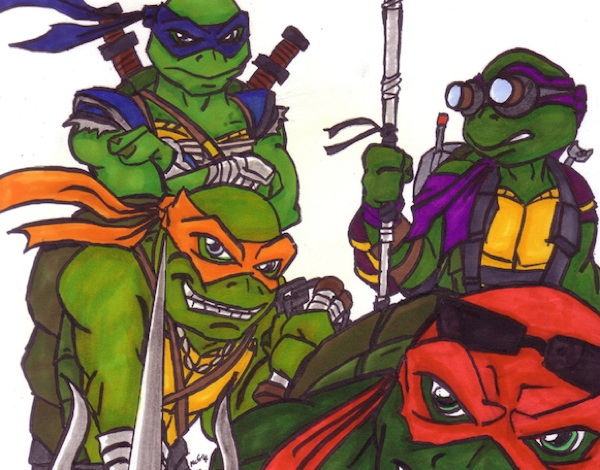 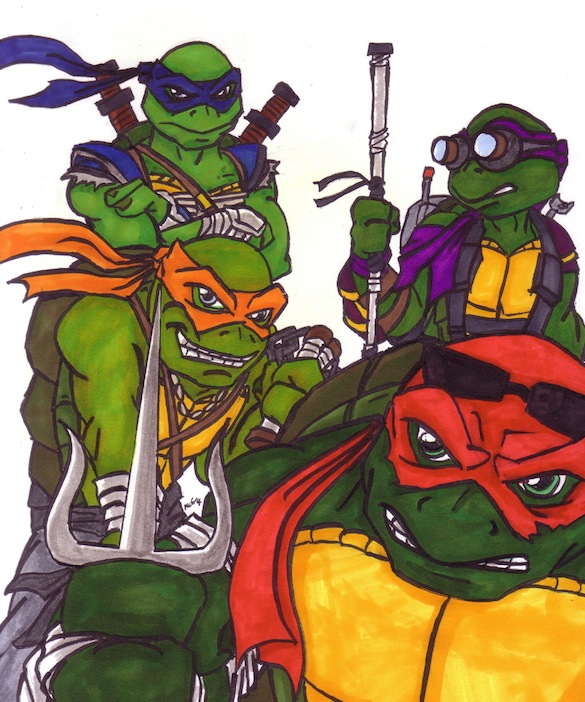 TEENAGE MUTANT NINJA TURTLES is stupid.  The franchise, since its inception in 1984, is based around a stupid premise: four pet shop turtles and a rat are mutated beneath the streets of New York City and are skilled in the deadly art of ninjutsu as well as being able to speak perfect English (despite the fact that turtles don’t even have friggin’ vocal chords!).  Yes, it’s dumb. But is it any dumber than transforming alien robots, guys that turn into green rage monsters or a mentally unstable billionaire that dresses up as a bat?  As with any superhero property, I embrace a monumental level of reality-bending and happily go along for the ride so long as it entertains more than annoys me.  And this latest version of the reptilian do-gooders is no exception.  Is it the best Turtles movie ever?  Well…not really.  At best, it’s just a dumb-yet-fun action flick.  But it’s certainly not the travesty people have been anticipating.

Since day one, this reboot has been met with hostility on all sides.  From the “Michael Bay is raping our childhood!” statements to naysaying Megan Fox’s April O’Neil to crying tears of blood over the more grotesque redesigns of the Turtles, this has been the movie that could do no right. But throughout all of the bashing from the more…ahem…”passionate” members of the fan base, I kept a level head and maintained perspective. If you so desperately want your cute 90’s Turtles, they’re already readily available on DVD and BluRay.  If you want the original dark Mirage versions, The Ultimate Collections are waiting to be purchased and read.  This is a different take, a new vision and I’m not going to automatically fault a production team for wanting to break away from the same old schtick.

Michael Bay, despite what you may think of his versions of the Transformers, knows big-budget action spectacle and he seems to have passed those lessons down to director Jonathan Liebesman (WRATH OF THE TITANS).  Though I’ve never really been a fan of his prior to this film, Liebesman has crafted a few spellbinding action sequences that will deliver plenty on the thrills. And again, I’m appreciative of the filmmakers putting the Turtles and friends in scenarios we’ve never seen them in before such as a high-intensity mountain chase where they use their shells as sleds on the snow, a skyscraper battle with global stakes on the line and even a down and dirty face-off between rat sensei Splinter (Danny Woodburn, voiced by Tony Shalhoub) and the evil Shredder (Tohoru Masamune) that actually lasts more than 2 seconds!  This may not be as dark a reboot as some diehards would have wanted, but it certainly tows that line from time to time.

I am also appreciative of the fact that no characters in the film reach Sam Witwicky-levels of annoyance.  Despite a more “mutated freak” look, the Turtles have retained their longstanding character traits: Leonardo (Pete Ploszek, voiced by Johnny Knoxville) is the no-nonsense leader, Donatello (Jeremy Howard) is the awkward science geek, Raphael (Alan Ritchson) is the bad-tempered bruiser and Michelangelo (Noel Fisher) is the laid-back jokester who has the hots for April.  Sure, you have some stereotypical team banter and brotherly bickering, but it never feels grating or off-putting and actually earns a laugh here and there.  Shalhoub’s Splinter conveys sage fatherly wisdom well enough.  I just wish he had more to do than be an exposition dump.  Fox’s April may be saddled with a lot of exposition, as well, and relegated to supporting player once the Turtles show up, but she appears more game for this material than she was in the TRANSFORMERS series and does genuinely contribute to the efforts of the heroes rather than being the “Bay eye candy” we all expected her to be.  Save for one lewd comment from Michelangelo early on and a quick scene to make a “staring at her butt” joke, the objectification of April doesn’t permeate throughout the proceedings.  And, once again, she’s nowhere near as annoying as Shia LaBoeuf.  The same could be said for her cameraman Vern (Will Arnett) who is able to be humorous and charming at the same time.  And even though it’s the umpteenth time you’ve seen him in this kind of role, William Fichtner (THE LONE RANGER) is perfectly fine as villainous industrialist Eric Sacks (yup, we were all faked out by his possible Shredder casting…or maybe not.  Maybe that was just me).

There were some tweaks to the origins that seemed to be particularly confusing choices, but then again, once I put it into perspective, I realized that the movie was just trading out one stupid idea for another.  The Turtles are mutated and experimented on in a lab instead of by accident…okay, big whoop!  Either way they still get mutated.  Splinter learns and masters ninjutsu from a book he finds in the sewers rather than mimicking the movements of his master when he was in a cage. Again…they’re both equally implausible, so take your pick!  April’s scientist father lets her keep Splinter and the Turtles as pets when she was a little girl and she saves them from a fire by freeing them down a storm drain…eh…yeah, I will admit that’s a little too convenient of a set-up for their future relationship.

Honestly, that’s where the movie’s biggest problems and plot holes start to show. Everything gets wrapped up tightly in a series of coincidences that there is no proper conflict or development and the film’s pacing doesn’t help matters.  For the first 20 minutes or so, we’re following April’s story as she tries to learn more about Shredder and his Foot Clan. But once the Turtles show up, the movie has no time to waste as it barrels through exposition and action scenes and is hoping that you’re keeping up. The Turtles are characterized properly, sure, but there is no arc or journey involved in their story like there was in previous versions.  Evil rears its ugly head, they have to stop it because…well…because!  Nothing has been learned, no grand moral has been revealed.  The Turtles, from beginning to end, are left unchanged by the events that took place.  The same can be said for April, as if her relationship to the Turtles would have been any different regardless of the convenient backstory that hammers in the theme of family.  Come the film’s closing moments, she appears to know no more or less about them than when she started.

Perhaps the biggest casualty of the story structure and pacing is the Shredder. Once one of the Turtles’ greatest adversaries, Shredder is now reduced to being Sacks’ hired muscle in the third act. He rarely speaks and we’re never given any real idea about what his goals or machinations are in the film.  All of the grand villain speeches and explanations are given to Sacks, and yet Shredder is still supposedly our main mastermind?  He’s not even a character proper, he’s an obstacle for the Turtles to overcome in the end.

Another downside is that the plot is uncomfortably generic.  I was hoping for a little more from the Turtles’ big screen return than a rehash of THE AMAZING SPIDER-MAN.  As bat-shit crazy as the “alien origin” angle sounded, that at least would have been something different and weird.  As a result of the studio probably wanting to play it safe rather than piss off the core fan base any further, there are no surprises when it comes to this script.  It’s a very bland and by-the-numbers action film storyline that just happens to have the Turtles in it.

But again: perspective.  The previous TMNT films never really bothered to venture beyond simplistic “good vs. evil” conflicts, so why should this one?  And let’s be honest, the Ninja Turtles have always been more about kitschy fun than about pushing the limits of superhero storytelling like WATCHMEN.  Heck, the 1990 Turtle film, the gold standard for all Turtles films in my eyes, is sitting nice and pretty on a whopping 40% on Rotten Tomatoes!  Why should fans and moviegoers expect this iteration to try and aspire to be any better when the franchise has shown that it is perfectly fine with just being enjoyably stupid?

TEENAGE MUTANT NINJA TURTLES is far from a deathblow to the franchise.  TV shows, comics, video games and toys keep the brand going strong and no doubt your kids and hardcore fans willing to sacrifice unreasonably high expectations will be entertained plenty by this latest installment.  After all, I was.  Did I want a better-paced and more unique story for my Heroes in a Half-Shell?  Of course, but I’m not at all surprised or infuriated by what we got.  When it comes to the Turtles, you just gotta go with the flow and embrace the stupidity of it all.