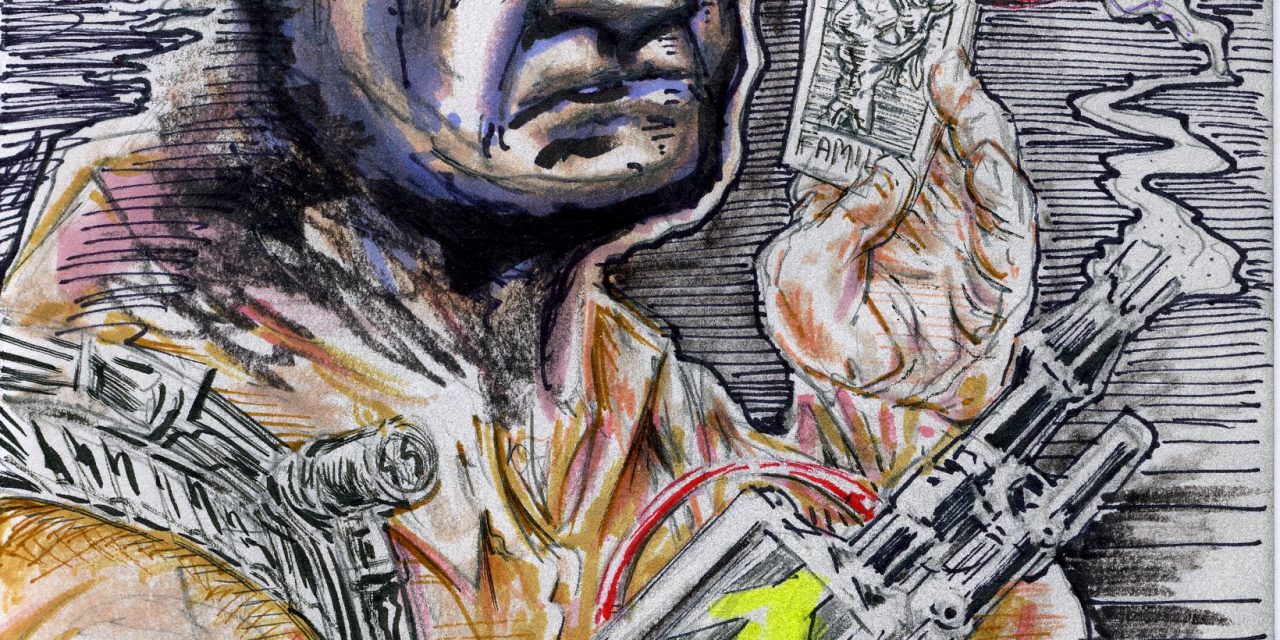 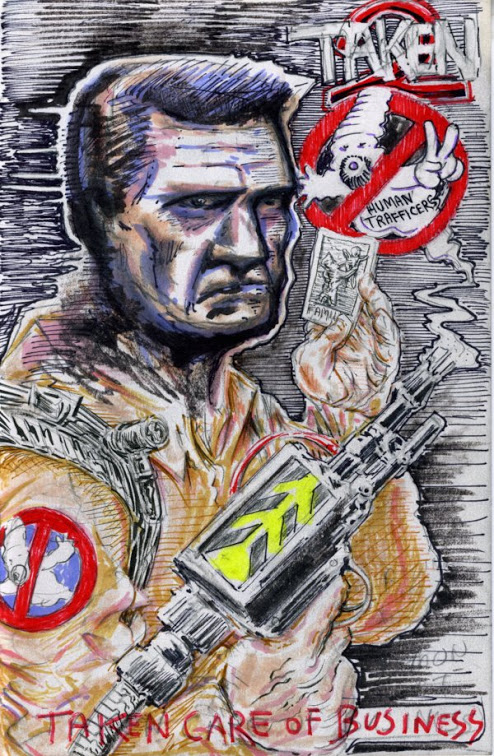 Something you must know before I dive into this review is that I am a big fan of 2008’s TAKEN. Sure it’s a borderline B-Movie when it comes to plot and characters, but it also serves as a wonderful excuse to put Liam Neeson (THE GREY) in a handful a bad ass scenarios where he gets to kick a huge amount of asses in order to save his kidnapped daughter. Once I heard there would be a sequel with Neeson returning, my inner nerd began to burst with joy.

TAKEN 2 stars Liam Neeson as the bad ass retired CIA operative Bryan Mills and is accompanied by his daughter Kim (Maggie Grace; LOST) and ex-wife Lenore (Famke Janssen; X-MEN Series). I am glad all the actors returned to there respective roles for the sake of continuity. The film is written by Luc Besson (THE TRANSPORTER) who also wrote the first installment and is directed by Oliver Megaton (TRANSPORTER 3).

Consequences. That is the main theme in TAKEN 2. For every cause there is an effect. This is by far my favorite aspect to this film. In the first film, Bryan Mills (Neeson) killed dozens of foes in order to rescue his kidnapped daughter Kim. A lot of action movies show our heroes killing villain after villain yet there are rarely any consequences involved. Good guy kills bad guys, good guy saves day, bad guys go away. Well what happens when those “bad guys” have loved ones and family members that want to seek revenge? I’ll tell you what happens, TAKEN 2 happens! The main story here is that a father of one of the victims from TAKEN is hell bent of finding the man responsible for his sons death in order to torture him and his family. This is a pretty brilliant concept for a sequel to an action movie that is rarely approached. I give a lot of credit to writer Luc Besson for pursuing this angle. Well done sir. In TAKEN 2, Bryan’s ex-wife Lenore is going through a divorce and his daughter Kim is learning how to drive and has a new boyfriend. Bryan still lives close by in an attempt to be a part of Kim’s life and he is currently helping her learn how to drive. Soon Bryan must go on a trip to Istanbul to take care of some business. When he sees the troubles his ex-wife and daughter are going through, he offers for them to tag along and take a break from their stressful lives. They take him up on the offer and the three of them are able to vacation together until they are taken hostage by the revenge obsessed father mentioned earlier. What follows is another romp in the TAKEN universe where Bryan must use his particular set of skills to save the day. Overall, the story is fun and actually makes sense. Again, this is a borderline B-Movie affair, but I really didn’t mind. 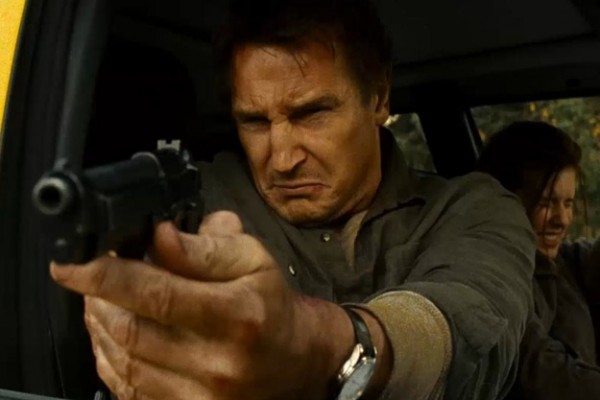 Liam Neeson as Bryan Mills is a very fun character to watch. He is a sentimental father who loves his daughter very much. You can also tell that he still has deep rooted feelings for his ex-wife Lenore. You can feel his pain and actually root for the guy to get back together with his family. The opposite of this family-loving persona comes out when anyone attempts to hurt the ones Bryan loves. Inside this caring man is a completely bad ass man who has the skills to get what he wants. Neeson has a great screen presence no matter what film he is in and I always enjoy watching him do his thing. TAKEN 2 is no different and he displays a great balance between loving and ruthless. As mentioned before, Grace and Janssen return to their respective roles and have a much bigger part to play this time. I was glad to see them get expanded roles which further complicated everyone’s relationship with one another. Besides our main players, we have an assortment of bad guys that all do their best to be convincing enemies. While no one actor really shined through, none were distractingly bad either. All in all, the actors all do there parts well, even is there is a fair amount of cheese involved.

Alright, so the B-Movie story is pretty interesting and works well, and the characters all do a decent enough job with their roles. What about the action? Well, this is the aspect of the movie where I had the most trouble. Sure there were some great moments of action here and there, but it was never as memorable as what we saw in TAKEN. I think the biggest issue is that most of the action sequences were WAY to shaky for me to fully enjoy. When I watch Neeson kick a guys ass I DO NOT want it to be lightening quick with a crap ton of cuts and edits all while the camera is shaking all over the place. I know it is a common complaint among action aficionados, but it is extremely evident and distracting in TAKEN 2. Let me see what Neeson is doing and let me revel in its badassery for a little bit instead of quickly editing from punch to punch. While this shaky-cam approach was disappointing, it did not completely ruin the experience. It just saddened me a bit. I will admit that TAKEN 2 does do a much better job showing you Bryan’s unique set of skills and how he thinks. There is one scene in particular that I will not spoil involving some grenades and a gun that was just amazing to watch unfold. It just took me a bit by surprise when I got more enjoyment out of how Bryan got out of a few lethal and desperate situations rather than being excited about a fight sequence. There are a lot of really smart moments in this film that I highly enjoyed. 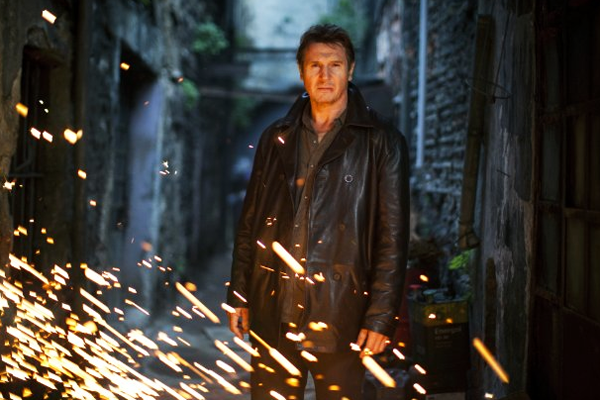 I know a lot of people out there are saying that TAKEN 2 is a stinker and I believe those people are just approaching the film in the completely wrong way. Approach it as a harmless borderline B-Movie with some smart moments and a handful of fun action sequences and you will surely have a good time, especially if you are a big fan of Neeson like myself. Sure I was a bit disappointed with some of the shaky action sequences, but by no means did it spoil the film. The story is really fun and often quite smart, all the actors do a good job with their respective roles, and it’s all surrounded by moments of Liam Neeson being a bad ass. Fun stuff if you ask me. In the end I’m glad this sequel was made and I’m glad I had a chance to revisit these characters. While it may seem like a stretch, I would love to see a third and final film in this series.