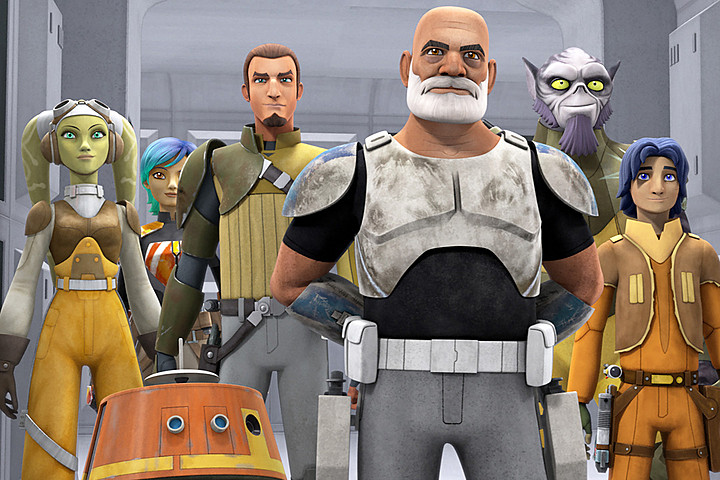 I learned a lot of valuable lessons during the era of FORCE AWAKENS.  I ain’t taking no chances.

For those of you watching STAR WARS REBELS, you already know how completely insane the show has gotten in the past season.  Without giving too much away, the show has started to catch up with the time leading up to STAR WARS:  A NEW HOPE.  Which would make sense because this show takes place some time after the events of REVENGE OF THE SITH.  The proof in that pudding is the introduction of Darth Vader as the show’s latest protagonist. (Damn it’s fun to see Vader at the height of his power) The introduction of Vader is equally devastating considering the relationship that Ahsoka and Anakin had in CLONE WARS. Actually, it’s rather heart breaking.

The trailer does a really good job of setting up the tone for the remainder of season 2, along with dropping some pretty bad ass reveals.  Along with an increase of Ezra’s powers, the show will finally be addressing the issue of Ezra and the pull of the Dark Side.  A thing that most blossoming Jedi’s have to eventually deal with. The trailer also reveals that Princess Leia will be making an appearance on some of the episodes.  This makes sense considering that in NEW HOPE, Leia was already running around with Death Star plans and was on a first name basis with high ranking Empire troublemakers. This also sort of answers how Leia would be familiar with the power of the Jedi’s and why she would eventually seek out the help of Obi Wan. This show has always sort of danced in the grey area of established cinematic canon and it seems like they are going to push that up to 11 in the remainder of season 2.  Knowing the fate of the Jedi at the beginning of Episode IV, I can’t help but feel like we are in for some pretty depressing moments in this show’s future?  Until then, enjoy watching Ahsoka and Vader having a proper confrontation and Ezra handling a better functioning version of Kylo Ren’s saber from Episode VII.   By the way, it was really difficult for me not to say that the ‘force was strong’ with this trailer.

The rest of season 2 of Star Wars Rebels will air on January 20th.