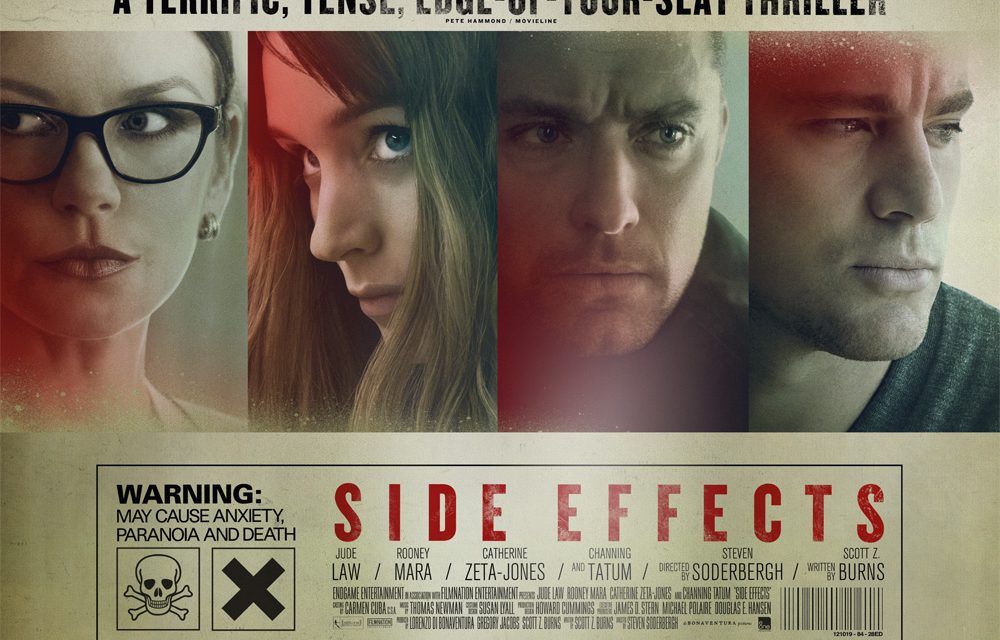 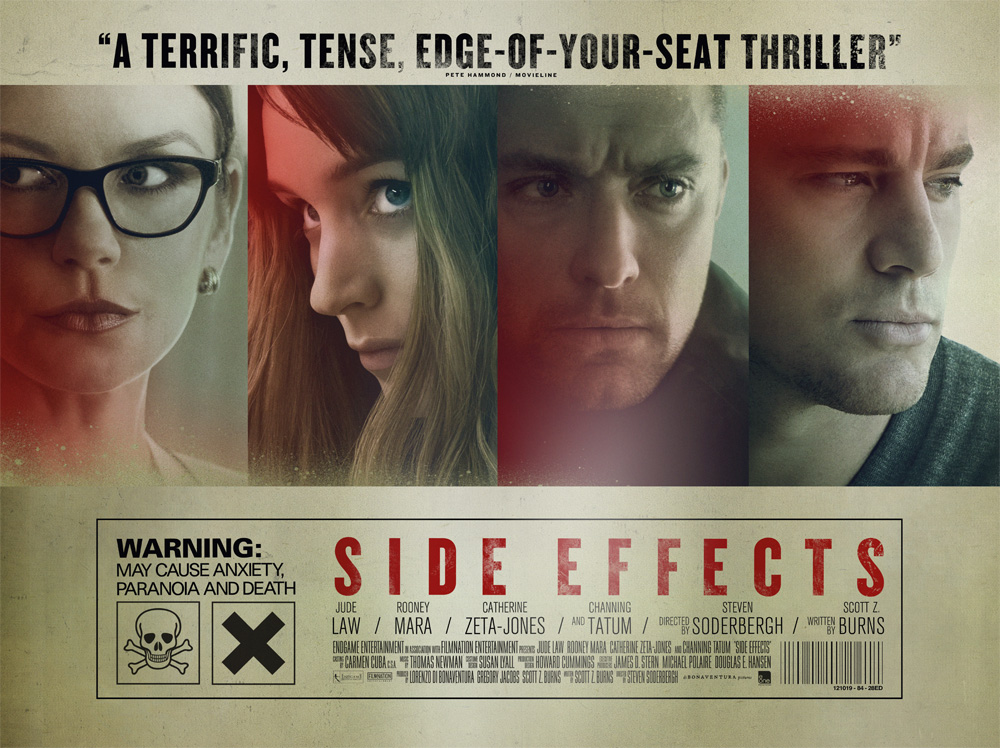 SIDE EFFECTS opens with a crane shot of the New York city skyline that slowly moves over to a large apartment building with dozens and dozens of windows. From the outside every window looks identically harmless. The building isn’t in great shape. The design is practical and its colors dreary. It’s a dull structure. Despite this the camera pushes closer to one particular window inviting the audience to peep into the lives of those who inhabit the space. Like any big city there’s a thin veil of normalcy brought about by the population’s daily routines. Director Steven Soderbergh’s (OCEAN’S TRILOGY, HAYWIRE, TRAFFIC) latest film, however, suggests that underneath the veneer lies a sick society that has hastily turned to prescription drugs in order to cope with its inherent flaws. Soderbergh and frequent writing collaborator Scott Z. Burns (CONTAGION, THE BOURNE ULTIMATUM) tell the story of one such social circle but allow you to infer that the events that unfold could happen to anyone in this day and age.

The story revolves around a young woman, Emily, (Rooney Mara, THE GIRL WITH THE DRAGON TATTOO) whose husband, Martin, (Channing Tatum, MAGIC MIKE) is in the process of finishing up a four-year prison sentence for insider trading. It appears Emily has been having a tough time over the past few years coping with the big shift in her lifestyle and the fact that she is married to a convict. Martin comes home but everything isn’t rosy. She goes through a deep depression and tries to hurt herself. As a result Emily starts to visit psychiatrist Dr. Banks (Jude Law, CONTAGION) who prescribes dangerous little pills for her. At one point an alarming Hitchcockian development occurs that thrusts the plot into tense psychological thriller mode. Along the way, the filmmakers comment on society’s dependency on chemicals “that don’t turn us into something we are not but make it easier to be who we really are.” It’s as if in order to keep up with the 24/7 double-income-household rat race we’ve latched onto artificial enhancements and rewritten our own narrative. Prescription drugs aren’t to be looked down upon, we tell ourselves, they are a much needed pit stop on the road to success. Ultimately (and a tad regrettably), the film doesn’t explore this avenue too in-depth but instead sets its aims on spinning a terrific yarn of misdirection. Many scenes can be read in a myriad of ways that ensure SIDE EFFECTS is one that will reward multiple viewings. Things aren’t always what they seem in Soderbergh’s latest and to say more would be to ruin the fun.

Soderbergh’s fingerprints, like in all his films, can be found all over the place. The slick visual style is very much his trademark (he’s usually cinematographer and editor of his films although he uses aliases for both). In vintage Soderbergh fashion the scenes are edited schematically –tight scenes that convey the plot and emotion visually in as little time as possible. It isn’t unusual in SIDE EFFECTS to have fifteen second scenes of a sulking character in the corner of the frame. Alienation is communicated. Other times during conversation the camera is close up to the actors’ faces where the story –the lies, the truths, the fears– lives in their expressions. Many scenes are short and aren’t given time to breathe. They don’t have a lived in quality where the audience is given time to connect with the film’s characters and their plights. The human drama –the emotions– are ushered along briskly in an effort to serve plot. Performances potentially suffer and his films have been labeled as cold in the past. To overcome his tendency for mean and lean films the actors have to deliver.

Rooney Mara, as the story’s anchor, does an excellent job displaying a specific sort of white upper-middle class ennui but peppers the right amount of relatability as to not keep the audience at arms length. The same goes for Jude Law’s Dr. Banks who shoulders a large portion of the film. He’s an affluent New York doctor with an educated English accent. In the current political climate empathy for such a character does not come easy. Law finds interesting ways to play up our worst assumptions of the character while retaining his humanity. The audience does not know what to think of him, his intentions, and ultimately his actions. The film features flawed characters ironically appropriating each other’s nastiest traits in an effort to reach a goal. The film is less interested in showcasing sympathetic characters as it is human ones.

SIDE EFFECTS is allegedly Soderbergh’s last movie. He stated a mixture of nothing left to say artistically and dissatisfaction with the industry as his reasons. If this holds true then Hollywood will be down an innovative voice and the movie-going public will be all the poorer for it. It’s not only fitting that SIDE EFFECTS closing shot cleverly mirrors its opening one but in the way it leaves the story it also ties a pretty little bow on the gift of a great career.