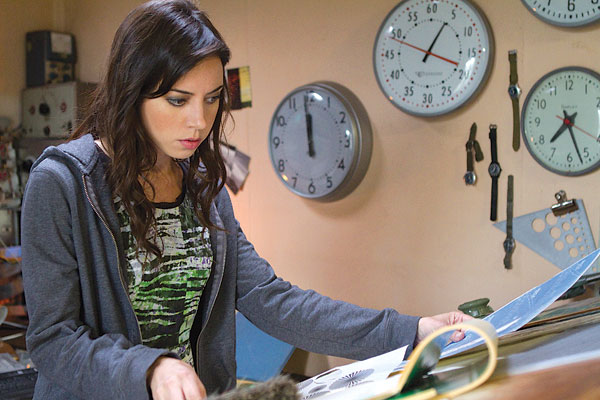 SAFETY NOT GUARANTEED is a quirky comedy starring Aubrey Plaza (PARKS AND RECREATION) and Mark Duplass (THE LEAGUE). The premise for this film is pretty original: a small group of staff from Seattle Magazine want to do a story about an odd classified add that reads “Wanted: Someone to go back in time with me. This is not a joke. You’ll get paid after we get back. Must bring your own weapons. Safety not guaranteed. I have only done this once before.” Despite this intriguing setup, its not so much about science fiction, rather it is a poignant look at love and regret.

Darius (Aubrey Plaza) is an intern at Seattle Magazine who finds something of a kindred spirit in Kenneth (Mark Duplass), the socially awkward man who wants to travel back in time. Both are social enigmas, Darius for her abrasiveness and Kenneth for his eccentricities, but in their mutual desire to change the past they grow to respect each other, despite their flaws. Juxtaposing these two misfits is Jeff (played by Jake M. Johnson (NEW GIRL)) who is a shallow, selfish man hoping to use the trip to find the story as an excuse to reconnect with his old flame Liz (Jenica Bergere ( THE DREW CAREY SHOW)). Also in the mix is Arnau (Karan Soni) a bit of a creeper who is just doing an internship to diversify his grad school applications. As these characters progress along their chosen paths, the audience is presented with a kaleidoscope of viewpoints on life, love, maturity, and regret which gets one thinking without ever forcing a particular view point down your throat. SAFETY NOT GUARANTEED is one of the most refreshing comedies I’ve seen in recent years, and I think a big part of that is the cast.

It isn’t often that a film has a fantastic ensemble cast, but that is certainly the case here. I feel it would be doing a disservice to overemphasize one actor over another, because they were all equally outstanding. At no point did I feel I was watching an actor and not the character; which was surprising for me because I am fan of both Aubrey Plaza and Mark Duplass and typically my fandom will at some point pull me out of the movie, but that never happened here. Everyone was spot on with their characters, to the point that if you ran into any of the actors shortly after the movie, I think it would take a few moments to readjust to the reality that they are an actor, and not who you just saw on the screen. With such a great story and a fantastic cast, I was a bit surprised when I looked up the director.

SAFETY NOT GUARANTEED was directed by Colin Trevorrow. He only has four previous directorial credits: one short film, one documentary, and one TV movie but his lack of experience isn’t much of a hindrance to the film. He is very accomplished at portraying human interactions, and skillfully elicits emotion and heart from his scenes. There were a couple of confusing moments when scenes involved vehicles and I wasn’t quite sure exactly where a vehicle was supposed to be in reference to what the actors were reacting to, but this was a very minor distraction that hardly took anything away from the overall experience. It should also be noted that the film was written by Derek Connolly whose only other writing credit was the TV movie Trevorrow made. Based on the quality of SAFETY NOT GUARANTEED, I hope both Trevorrow and Connolly continue to work on movies, preferably together, because they have proven they have the talent to make something wonderful. 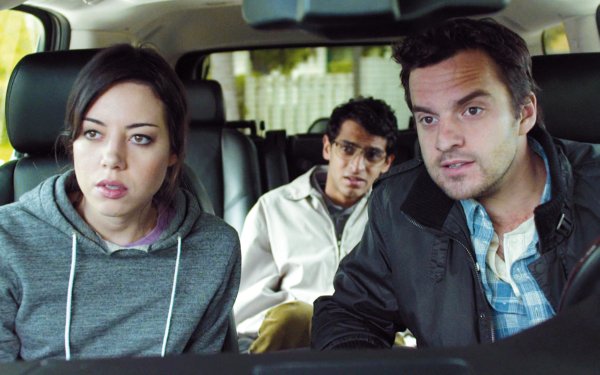 If I hadn’t seen the trailer for SAFETY NOT GUARANTEED when I went to see MOONRISE KINGDOM, I probably would never have heard about it. It was made on a shoe string budget and I haven’t seen any commercials or adds for it, so I started looking into the production companies involved with the movie and was pleasantly surprised. The two main companies involved in production were Big Beach Films and Duplass Brothers Productions. Big Beach has been involved in EVERYTHING IS ILLUMINATED, LITTLE MISS SUNSHINE, and OUR IDIOT BROTHER just to name a few. Its no surprise that they are involved in this gem of a film, as SAFETY NOT GUARNETEED brings the same delightful comedy found in several of their other films. Duplass Brothers Productions is a production company founded by Mark and Jay Duplass. As Mark Duplass only recently blipped on my radar for his role in THE LEAGUE, I am intrigued and excited to search out other projects he was involved in and see if any of them are hidden comedy gold like SAFETY NOT GUARANTEED.

I know that this review has been a little more oddball than others I’ve done, but I just couldn’t find a better way to review SAFETY NOT GUARANTEED and all of its oddball goodness. It is one of the best movies I’ve seen this year and if you are even remotely a fan of atypical comedies, than you MUST search this movie out, because it is well worth your time.