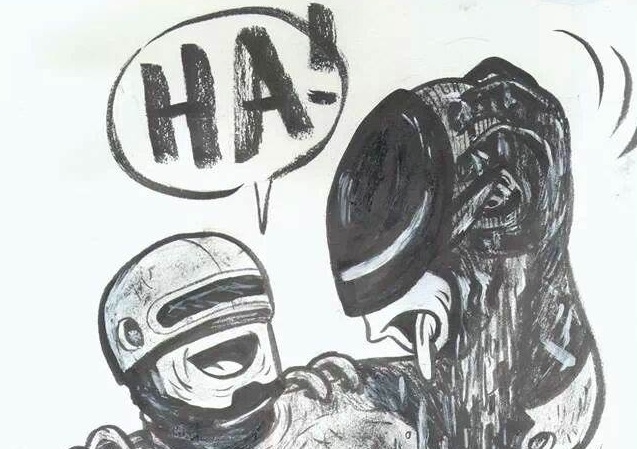 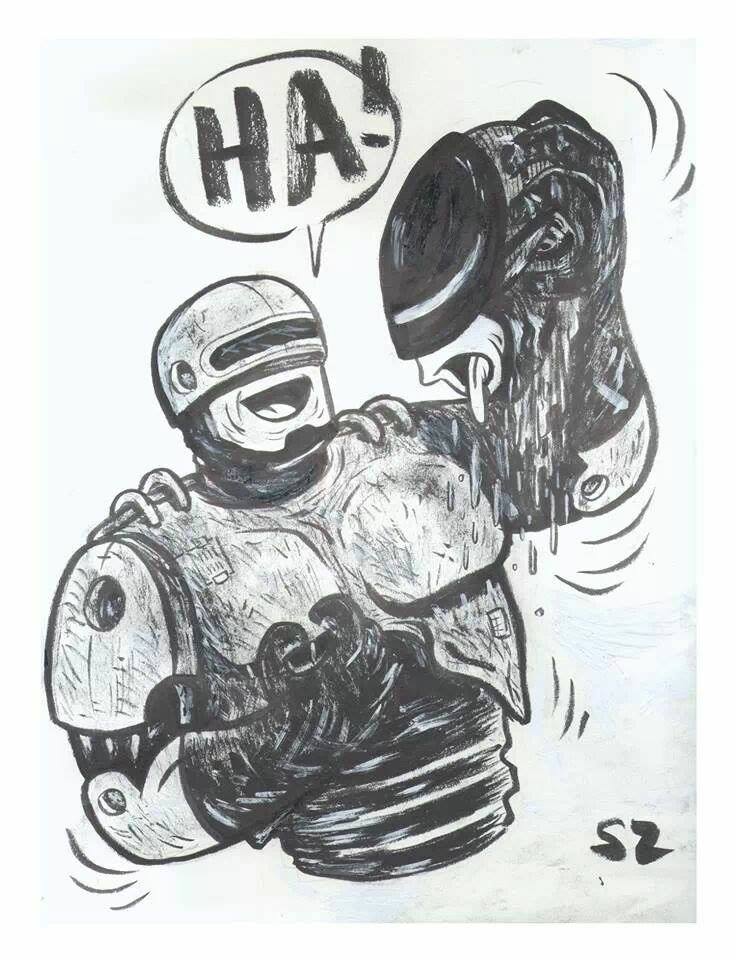 Remaking 1987’s ROBOCOP was inevitable. No matter how much people piss and moan about Hollywood remakes, they are here to stay and we just need to get use to it already. I’m a huge fan of the original film for sure, but I’m also open-minded enough to give these remakes a fighting chance (EVIL DEAD anyone!?). That does not mean I wasn’t a bit skeptical (because I was), but the trailers and marketing campaigns were fun and gave me a ray of hope. I was also curious what a modern ROBOCOP film would look like since the story being told here is more relevant today as it has ever been. Well, that and Michael Keaton of course. Unfortunately, not even Mr. Keaton can save this reboot from cowering below the original’s beauty, and it ends up being a bit more dull and admittedly more forgettable than I would have liked.

Our newly remade story opens and closes with a passionate pro-robot spokesman named Pat Novak (Samuel L. Jackson; DJANGO UNCHAINED) ranting and raving on his television show called “The Novak Element” about how the US needs to catch up with the rest of the world and offer robotic protection against crime. His high energy and loud matter of fact opinions add a great satirical element to the film that was much appreciated and honestly had me laughing aloud whilst revving me up for the movie ahead. Jackson nailed this performance and really had fun with his material. And on a side note, if you are famous for yelling “Mother F*ck*r” at the top of your lungs, you are pretty bad ass in my book. Just saying.

Moving forward, audiences are soon introduced to a Detroit cop and family man named Alex Murphy played by Joel Kinnaman (THE KILLING). This is my first time seeing Kinnaman on screen and his acting was a bit…well, robotic. I know what you’re thinking, but I don’t believe a robotic-acting man turned into a robot (cyborg, android or whatever you want to call it you nerd!) is really all that interesting. I suppose what I’m getting at is that this film failed to humanize the man before his transformation. His scenes at home with his wife, played by Abbie Cornish (SUCKER PUNCH), and son were just forced and hollow. Cornish seemed very standoffish and distant right away making me think their marriage sucked, and Kinnaman just pet the shit out of his kid and kept kissing his head over and over again really rubbing in the fact that he definitely loves the little guy. Family life just seemed weird and forced at home. Soon after, Murphy is blown to crap from a car bomb due to him seeing something sinister in the line of duty that he probably shouldn’t have. This event paves the way for OmniCorp to snatch him off his death bed (with his wife’s approval of course) and turn him into the new symbol for American protection that has the much desired “human-element” the public thirsts for.

ROBOCOP’s story moves at a very awkward pace. Like I said, it starts off on a high note, stumbles with the character introductions, simmers in the “what’s it like to be more robot than human” elements, has a dash of adrenaline (not nearly enough), and all boils down to a anticlimactic ending followed by another high energy rant by Jackson. It’s all over the place! Something the original excelled at was the even pacing that saw a man destroyed, rise up, and then kick some major ass in a final balls-to-the-wall spectacle that redefined “revenge”. I admit the biggest battle this film has is being compared to the original. I can’t help it! I would be curious to see what young fresh eyes thought of this film without any knowledge of the original.

Besides Kinnaman as Robocop and Cornish as his wife, we have a pretty inspired cast. The aforementioned Samuel L. Jackson nailed it and really added a lot to the energy of this film. Gary Oldman (BOOK OF ELI) was great as Dr. Norton and served as an interesting character with a lot of moral dilemmas thrown his way. It was so great seeing Michael Keaton (BEETLEJUICE) as the manipulative face of OmniCorp. Other noteworthy side characters such as Jackie Earle Haley (WATCHMEN) as the evil robo-specialist and Michael K. Williams (BOARDWALK EMPIRE) as Murphy’s cop buddy were all great additions to the overall talent that kept me invested throughout the film’s 108 minute run time.

What I was really hoping for with this new ROBOCOP was some killer special effects and action sequences. While there were a few moments here and there that shined, this new ROBOCOP definitely lacked in the action and spectacle department. The original is so violent and over-the-top that this new iteration looks like a Saturday morning cartoon in comparison. Alex Murphy got brutally destroyed in the original and here he just got blown up by a car bomb. Booooooring. My jaw dropped in the original during Murphy’s near-death and I truly and honestly felt horrible for the man which made his eventual comeback and revenge all the sweeter! I will say the ED-209’s in this remake look stellar and his brief yet awesome tussle with them was my favorite action sequence for sure. His training mission session was pretty great as well, but when the credits rolled it just felt like I should have seen more. More guns, more explosions, more destruction would have been most welcome.

If I had to pick one element from this new ROBOCOP that was better handled than the original it would be the fact that we really get inside Murphy’s head during his transformation and we get a close look at what is actually left of the man underneath the suit. The depictions here of Murphy stripped of his robotic body is pretty damn amazing and really packed a visual punch. Seeing what little was left of the man after his brutal accident was really impactful and gruesome. Much appreciated. I admit I had a lot more investment in the character when I saw him in his most vulnerable state. Something that bothers me quite a bit (but is an obvious nitpick) is the fact that humans can resurrect the dead and transform them into ultimate weapons, but they can’t figure out how to silence that pesky robotic sound whenever he moves. “Brrrrzzzzzzt” “Zappppffffftttt” “Zerbphawwww”. For a suit the cost millions (billions?) of dollars, you would think the damn thing could move around in silence. Seriously. You can kiss stealth missions goodbye.

I promise I went into this new ROBOCOP with an open mind and was rooting for it to be a success. While it will never come close to the awesomeness of the original, it does entertain from time to time even considering its awkward pacing. While Robocop himself and his wife dish out some pretty “meh” performances, the rest of the supporting cast levels the playing field a bit and provide some good fun. While my biggest disappointment was the lack of spectacle and action, there are definitely a few sequences and moments worth the price of admission especially if you are a sci-fi nerd like myself. If you are thirsty for some new sci-fi this month I’d say ROBOCOP is worth seeing in the theatre, but if you are on the fence here i don’t see the harm in waiting for its eventual Blu-Ray release. Aren’t you glad this review didn’t have any cheesy puns or riffs on famous ROBOCOP quotes!? Stay out of trouble. DAMMIT!