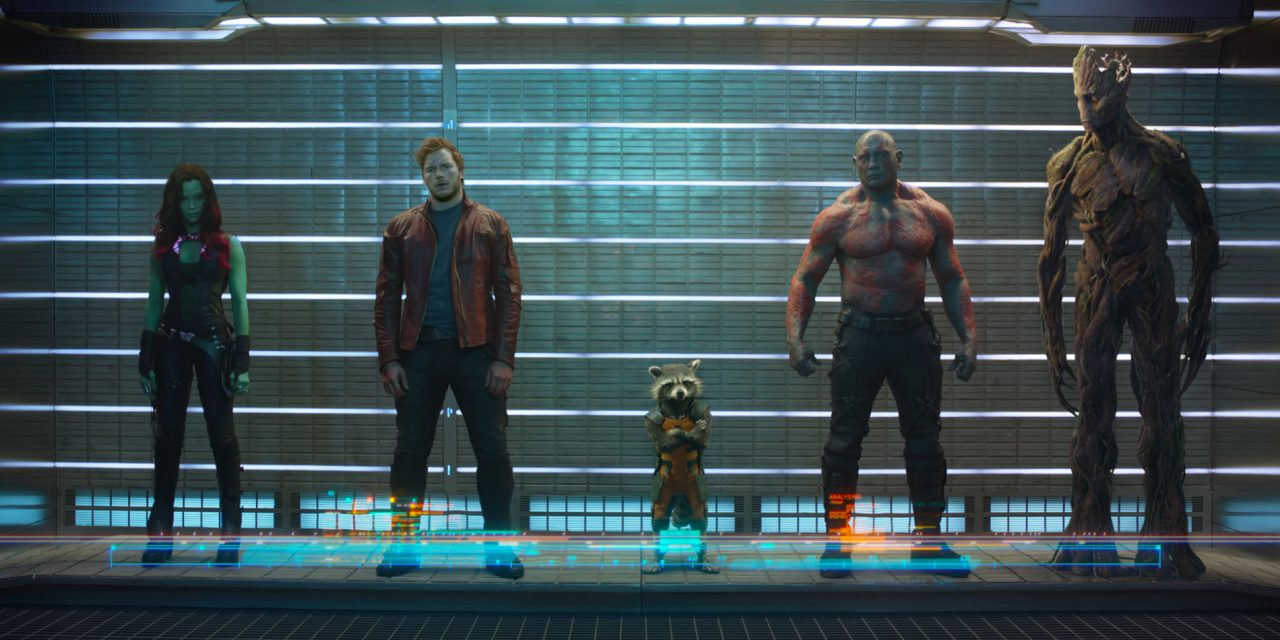 Of course your panties just exploded across the room.. This is a god damn Marvel comics movie.

In a cinematic age where we have (thoroughly established) characters such as Iron Man, Thor and Captain America collectively tearing up New Amsterdam, Marvel has decided that their next big budget summer blockbuster is going to be a space opera that has a friggin walking tree and a gun toting raccoon as their main characters.  Not to mention a ragtag collection of space badasses that very loosely tie in with their flagship franchise.  Are you friggin kidding me? Who does this? After bottling fire, what production company would willingly venture so far off the extremely successful golden highway and risk it all on a nonsensical space adventure, featuring an entire universe of characters that are completely unknown to 80% of the audience they already have sufficiently seduced? Marvel fu*king Comics, that’s who.

Lets get into this, shall we?

There he is. Andy Dwyer. Right off the bat, it is clear that Chris Pratt was made for this role. He enters this alien temple with a confidence that only Starlord (Or Indiana Jones) would have.  But, he also comes across as a very human character that we instantly connect with and want to rally behind. Wisecrack all over me you beautiful bastard.

My favorite part of this character is that he is being referred to online as a ‘child of the 80s.’ Rocking his Walkman and puffy headphones,  Peter Quill will clearly be a human who escaped Earth as a child and his only remaining connection to his home world will be through his collection of 80s music and obscure references. How cool is that?

Best part: his goofy face when he’s staring at the floating orb.  Also, his human, casual response when he’s surrounded by a squad of alien guards. Perfect.

Okay, this is sort of brilliant. Obviously, the creative folks behind this movie know that nobody is going to know who these characters are.  Me?  I’ve been reading Marvel comics my whole life and I only have a very vague understanding of who these characters are. Luckily, Marvel has really amped up the exposure of these characters in the funny books lately. I read comics though. I’m a nerd. A beautiful charming nerd.  But, the civilians watching this trailer aren’t going to have the slightest idea of who these ragamuffins are.  SOooo, this trailer, brilliantly, breaks each character down for you in a  futuristic galactic police line up.  Oh. I already love this movie.

Look at that smirk.  I think if I had to reference one image that best represented Gamora, it’d be this photo.  The adopted daughter of Thanos (That big purple guy who made the mid credits creeper appearance during AVENGERS) Gamora is the last of her race and one of the most bad ass warriors in the Galaxy. Zoe Saldana. What can I say about you? AVATAR. STAR TREK. My dreams. You look like you’re having a blast in this trailer.

David Bautista.  Before I get into the basics of your character, I just want to say that you have melted my heart in every interview you have done about this movie. All the energy you put into this role. How excited you were when you found out you had been cast.  I wish upon you, a future reminiscent of Sir Hugh Jackman. Congrats, my man.  I can’t wait to see you kick ass as Drax:  The Destroyer. Oh, yeah.. um. Well. Drax was also a human and his spirit was put into a powerful new body and conditioned to become the destroyer of Thanos. Yeah.  Thanos. Good luck with that. Much like Bautista, Drax is as dangerous as he looks, but embodies the spirit of a hero.  Basically, a guy you definitely want as a friend.

PS. You kicked ass in RIDDICK.

Look at this knucklehead.  Can you believe that Marvel got Bradley Cooper to voice Rocket Raccoon?  I love that.  I’m sure he’s going to bring his particular level of sophistication and class to the character that is all about carrying a big gun, wisecracking and shooting faces off. Shoot first; ask questions later. Actually, screw questions.  More with the shooting and less with the thinking.  The calm of Bradley Cooper, with the maniacal calculation of Rocket Raccoon.  Soooo good! Wait. He’s just called ‘Rocket’ in this.  I’m sorry. It’s cool. It’s cooollll.

I bet you’re wondering why Marvel hired Vin Diesel to voice Groot, when all he ever says is ‘I am Groot.’ It’s not so much the words, but the inflection in which they are said.  I am confident that Vin will be able to be extremely expressive as Groot, even with the limitation of only knowing three words.  When was the last time you watched IRON GIANT? ‘I am not a gun.’ Damn it. ‘House Plant. Muscle.’ He’s really just a big ole softy who got roped into this cosmic hayride by Rocket.  Also, those eyes.

I want ‘Obscene Gesture Alert’ tattooed across my neck.

Nebula is no joke. A deadly space pirate, Nebula will definitely prove to be a force of reckoning in this movie.  Seriously, how cool is her fight scene with Gamora going to be? AND.. Karen Gillian.  You know she shaved her head for this role? Gillian has proved to be nothing but amazing in everything she has ever appeared in.  Giving her heart and soul to every role that she plays. And.. when she yielded those double blades, rocking those outstanding space boots, I almost fell out of my body.

Yep. I don’t know who that dude is and I really don’t care.

Most descriptions of this movie describe Peter Quill as an ‘American pilot’ who is abducted and brought into space.  I hope not.  I really hope that he was a kid when he was brought to space and grew up in the universe of GUARDIANS.  I want him to be comfortable with a talking tree people.  I don’t want him to be confused about every little random alien technology he stumbles across.  Well, maybe a little bit confused. I just want this to be the world he lives and works in.  Nothing is new.  Except the new stuff. I want him to be a big kid trying to make a splash in the very weird universe he grew up in.  ‘Starlord. I’m Starlord, man. Legendary outlaw.  Ahh. Nevermind.’  Who calls him that?

You might remember Benicio Del Toro’s character ‘The Collector’ from his mid credits appearance in THOR: THE DARK WORLD as The Collector.  He’s after Infinity Gems, so, I can’t help but think a few might appear in this movie. Thanos is not going to be happy when he finds out his prized jewels are being held in his collection.

Also, the way she watches Starlord as he gets tasered.

The Milano. Yes. THAT Milano.

What they do best.

There’s a lot more going on in this trailer, but if you’re like me, you’ve watched it as many times as I have. This movie is going to be full of things that you have never seen before and you’re going to laugh and cheer throughout the entire thing. I’m just excited to see how good this movie looks.  Funny. Action packed. Serious, silly characters, handled with the utmost care. James Gunn had quite the task put down on him and this trailer, not only, proves that he was up for the task, but, more than capable of bringing Marvel’s movie franchise to the next level. or Phase.

Your GUARDIANS OF THE GALAXY.
This Summer. Marvel starts from scratch.
Do the right thing.  See this movie.  Don’t be an A-hole.