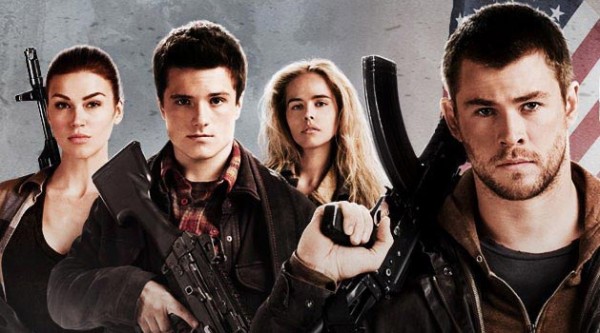 The original 1984 RED DAWN film was not a cinematic masterpiece by any stretch of the imagination.  But it was a substantial slice of 1980’s action cheese that featured some entertaining young actors the likes of Patrick Swayze (GHOST), Charlie Sheen (WALL STREET) and C. Thomas Howell (THE OUTSIDERS).  It was also a war film that was able to properly capture the cultural/political climate at the time regarding the tension and fear surrounding the continued conflicts with a now defunct Soviet Union.  A successful remake would not only have to be able to hit all of these marks, but hit them well and in a way that doesn’t come off as cheap appeasement to the fan base or laziness.

Unfortunately, the RED DAWN of 2012 was only really able to get one aspect of the original right: the casting.  One of the main issues I had with the original film was that, despite the compelling actors in the roles, the characters are still underdeveloped and frequently make inane and stupid decisions.  But in a way, that helped to get the action rolling and sell the idea of teenagers in over their heads and taking on a military superpower.  So I suppose, in that sense, the 2012 cast are worthy successors to their roles.  We may know squat about their motivations and background, but at least they’re interesting to watch.

Leading the charge is Chris Hemsworth (THOR, THE CABIN IN THE WOODS) taking over the Swayze role of the eldest Eckert brother Jed.  I’m a fan of Hemsworth and even though his backstory is paper thin, I do find myself enjoying him as the leader of the Wolverines in this movie.  He’s gruff, militaristic and to the point, but he’s able to properly convey sensitivity and a carefree attitude towards the younger team members when it’s called for.  His younger brother Matt, played by Josh Peck (DRILLBIT TAYLOR) is a little more uneven as he makes the lion’s share of dumb moves in the story, but is likable enough and shares good chemistry with Hemsworth to make the brothers’ strained relationship work.  Adrianne Palicki (FRIDAY NIGHT LIGHTS) does a fine job as Hemsworth’s love interest and fellow Wolverine Toni, but scenes of genuine affection or development between the two are so few and far between, that the relationship subplot may as well have been left out of the film.  I would say the weakest link in the chain would be Matt’s girlfriend Erica played by Isabel Lucas (TRANSFORMERS: REVENGE OF THE FALLEN).  This really is not the fault of the actress, though.  The character is just not given much to do save for being rescued by Matt after he ditches his mission to save her (one of the afore-mentioned “dumb moves”).  But there are a few standout performances: Josh Hutcherson (THE HUNGER GAMES) as the meek Robert who steadily becomes more of a badass (and actually delivers the classic “Wolverines!” battle cry) and Jeffrey Dean Morgan (WATCHMEN) in a smaller supporting role as Marine Sergeant Tanner, but still being one of the more interesting characters on screen. 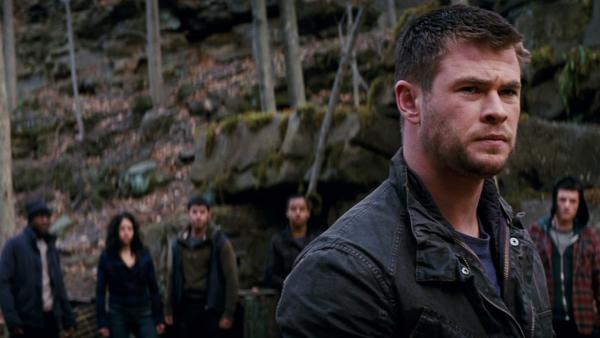 Truthfully, the acting is too good for the mess of a film that surrounds it.  The mass violence and carnage of the original film has been toned down in this modern interpretation to a PG-13 rating probably so that adolescent fans of the young actors on screen won’t be turned away by all the intense action.  In fact, a group of teenage girls that sat next to me in the theater wouldn’t stop swooning whenever Hutcherson or Peck came into view.  A good majority of the action scenes are done in the “handheld camera” style, making it disorienting and extremely difficult to establish who is shooting at what and from where.  Another aspect that detracts from this new RED DAWN is the effectiveness of the Wolverines as fighters.  In the original, the thematic element that they were kids still learning the ropes of guerrilla warfare stayed consistent throughout the film.  Here, within the span of a montage of Jed training them, the young rebels are instantly transformed into ruthless and efficient killers who only lose their cool when the plot deems it convenient.

There is also a lack of subtlety and suspense in the movie.  The invading North Korean force (which was originally Chinese until being tweaked in post-production so as not to offend and alienate the majority of overseas viewing audiences) doesn’t drop into the town as a silent-yet-deadly threat, but as a bombastic battalion of CGI paratroopers and bombers that kick up as much dust and explosions as they can muster.  The cold, harsh bleakness of the Wolverines’ situation is never fully touched upon opting instead to never slow down and let the characters have a second to breathe before the next action sequence.  The scene in which the Eckerts’ father, played by Brett Cullen (GHOST RIDER), is executed in front of them is immediately followed by them trying to move a truck stuck in mud and acknowledgement of the tragedy is never really given until the end of the film with a minor payoff that made me actually have to say out loud, “Oh, yeah.  Their dad was killed, wasn’t he?  I totally forgot about that.”

The new RED DAWN is not a terrible film, but it’s not necessarily a good film either.  It just kind of exists as a tamer reiteration of its predecessor and is pretty blatant in its intention to simply cash-in on the title alone.  Aside from the main cast performing their respective roles with way more sincerity and legitimacy than is required of them for this flick, there was simply just not enough in the style, story or action for me to latch onto and actually care about.  The original RED DAWN wasn’t perfect, far from it.  But at least it was something.